Juanita Jones Abernathy: We need people on both sides of the aisle.” 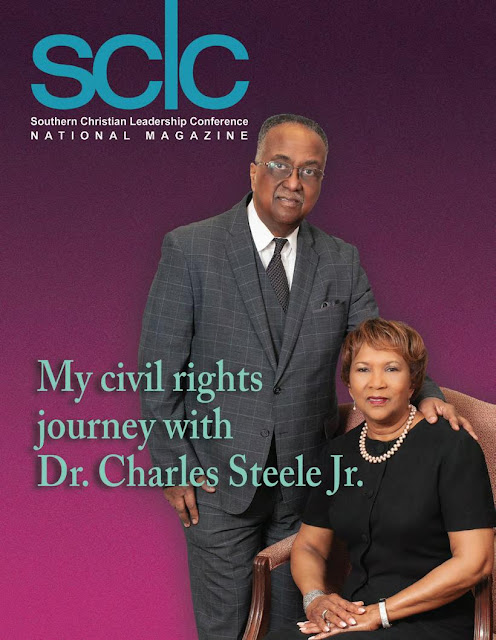 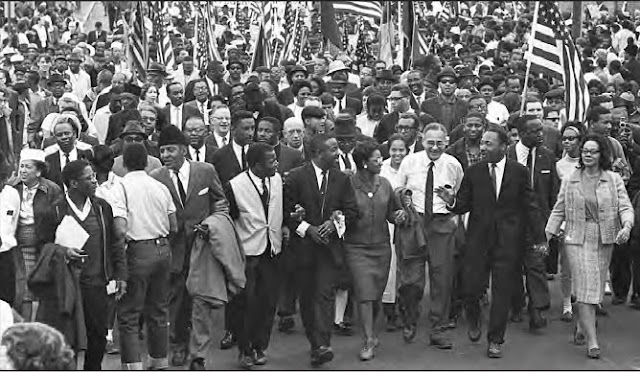 Juanita Abernathy (center), David Abernathy (second to her right), and John Lewis (third to her right) march from Selma, Ala. to the state capitol in Montgomery in 1965 with Martin Luther King Jr. and Coretta Scott King.
Photo: City of Atlanta.

Juanita Jones Abernathy, one of the pillars of the Civil Rights Movement, has lived an extraordinary life of community servitude and Civil Rights activism for a woman of her era. She was highly educated attending the famous Selma University Boarding School in Selma Alabama and a graduate of Tennessee State University. Her life and legacy as a Civil Rights Activist, former First Lady of the Southern Christian Leadership Conference, and Reverend Ralph David Abernathy’s courageous wife is widely revered.

That’s why a recent Metropolitan Atlanta Rapid Transit Authority Board Retirement Ceremony was organized for Mrs. Abernathy by self-proclaimed Republican “Statesman” Bruce LeVell. That dignified event is at the center of this commemorative article because on that occasion Mrs. Abernathy exuberantly expressed candid moments about her effervescent life as a wife, mother, and pioneering female civil rights activist. 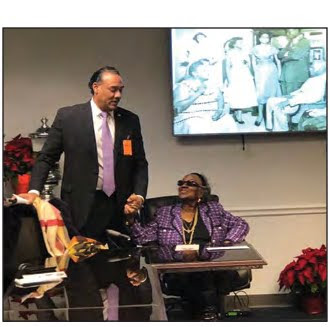 “You know people don’t vote now, I tell everybody,” laments Mrs. Abernathy. “We walked 50 miles for the right to vote in loafers, not sneakers, with blisters on our feet from Selma to Montgomery. I never miss an opportunity to vote no matter how small. My husband and Martin had been to see the president; and had told him how difficult it was for Blacks to vote in this county and especially in the South.” That was after Jimmy Lee Jackson was killed in Marion Alabama.

“They had a literacy test that was to prohibit blacks from voting,” continues Mrs. Abernathy during her retirement ceremony. “If you could not fill out all that information. Then you could not qualify to register to vote. My husband he was a KAPPA. He took his fraternity down to register to vote. They had all this material to fill out. When they got to him. He [Rev. Abernathy] wrote down the pledge of allegiance.”

Together many leaders advanced the voting right issue all the way to the White House. Mrs. Abernathy said how “President Johnson federalized the state troopers and forced them to protect us. We did all of that for the right to vote and we added no gerrymandering.”

Mrs. Abernathy’s historical contributions are also cemented in history along “The U.S. Civil Rights Trail” locations and attractions that document Abernathy’s and King’s story timeline state by state. Dr. Martin Luther King and Reverend Ralph David Abernathy were each other’s right hand sharing in the social struggles and triumphs of their time. The women who held these men down have stories of their own.

Former Georgia State Representative Roberta Abdul-Salaam is a self-proclaimed “Movement baby”, who much like Mrs. Abernathy does not mince words. “I’ve known Mrs. Abernathy through ‘The Movement’, she says. “I been working with SCLC since I was a 12 or 13 years-old. I went to my first National SCLC Convention in 1972.”

Rep. Abdul-Salaam, spoke about Black women who have always been the backbones of the community is different capacities. “Mrs. Abernathy is such a strong pillar.

She exemplifies the kind of leadership that woman have made a difference in the country for so long. I remember telling her a couple of years ago; that we were going to do a celebration on Dec 1st in commemoration of the Montgomery Bus Boycott. And she took me aside and took her time. She [Mrs. Abernathy] told me well you know I am the only one of the originals left. I kind of knew that. I was also fortunate to work with Mrs. Rosa Parks, Mrs. Coretta King, and Mrs. Evelyn Lowery. I said what is it that made you women stand out to these powerful men?”

The four female pillars of Civil Rights shared more than the struggles of being progressive woman during that era. According to Rep. Abdul-Salaam, “what I had noticed is that Dr. Young, Dr. Lowery, Dr. King and Dr. Abernathy all choose their wives from that same community. That had to speak for something.” All four women came from the same Union County community in Alabama. “Mrs. Abernathy had leadership in her blood.

I heard Mrs. Abernathy say, that if you want to be a good leader. Find good leadership and become a follower,” Abdul-Salaam recalls.”

Attorney Michael Tyler, a former MARTA Board president, was the first to speak at the ceremony. “She knew and understand the imperative of MARTA for those who truly needed it,” Tyler said. “Mrs. Abernathy was our compass.”

Tyler, hailed Mrs. Abernathy for her incredible moral compass and strengths: “You’ll see photos of Mrs. Abernathy when she was a younger woman. Back then she was team with her legendary husband, one of the icons of the 21st century, who she met back in high school.”

Mrs. Abernathy interrupted Tyler, “He [Rev. Abernathy] use to brag and say the problem with you all is I raised my wife.”

Tyler, after yielding to Mrs. Abernathy, said, “It’s not a mystery that Mrs. Abernathy was joined at the hip back in Selma back in the day with her husband and stuck with him all the time. It was noteworthy to me, Mrs. Abernathy, that back in 1955-56., when we had the Montgomery Bus Boycotts you were there. When I think about your service to MARTA, to me it’s been an extension of your service to ‘The Movement’. The movement after all started off on a bus. It was all about equity in terms of opportunities for African Americans.”

The Hip Hop Culture today would call her a “ride or die” revolutionary activist. Mrs. Abernathy recalled that “Rosa Parks sat down on my birthday in December 1955.”

“We met when I was 16 years-old,” Mrs Abernathy revealed. “He told people he raised me and he did.”

The right to vote was paid for with American blood and lives of Black and White people. Mrs. Abernathy’s passionately voiced that; “people were killed but we had blisters on our feet for the right to vote. Because people died it’s a blood ballot.”

Protecting others was a standard operating procedure with this noted civil rights heroine. Mrs. Abernathy identified as a Democrat but nevertheless found a way to defend Black Republicans. According to Black Republican businessman LeVell, she had a unique approach to how she influenced others. He says that Mrs. Abernathy protected him—a self-described Frederick Douglass Republican—from taunting and ridicule. In support of LeVell and other Black Republicans she told others; “we need people on both sides of the aisles.” That is a strong salient political statement from an iconic activist that resonates and remains relevant today.

“I fondly remember Mrs. A.”, says LeVell. “She was nice and fiery; when she put her hands on the desk and folded her arms and her eyes got big everyone knew to watch out. I was her self-proclaimed protector. I don’t know if she knew that; but everyone knew I wasn’t going to tolerate anyone disrespecting her.

Mrs. Abernathy was instrumental in the Montgomery Bus Boycott and gaining Atlanta MARTA transportation for maids and home workers. She literally walked  and marched for civil freedoms and access to transit systems for the working class. That was a was key to Mrs. Abernathy’s civil rights activism that now “spans decade’s across multiple cities and states—from Topeka, Kansas, to Memphis, Tennessee, from Atlanta, Georgia, to Selma and Birmingham, Alabama and all the way to Washington, D.C. charts the course of the Civil Rights Movement” as chronicled by U.S. Civil Rights Trail.

Mrs. Abernathy maintained that “people really don’t know that history. People think it just happened. It happened at the action of a lot of people.”

Mrs. Abernathy was a woman with great fearlessness to endure such a journey that included more than 100 locations across 15 states.

Political and Civil Rights Activists suggest that our society could learn a thing or two from the former First Lady of the SCLC and the Black Republican “We worked together for what is right” says LeVell.

“Civil Rights Veterans tell me that Mrs. Abernathy was brazen and outspoken about issues and events her husband and MLK captained,” says Maynard Eaton, SCLC’s National Communications Director. “She was not passive participant in ‘The Movement’. She was not a background player. Mrs. Abernathy was unafraid to unabashedly voice her strategic and savvy opinions, I’ve learned,”

The Transportation Civil Rights issues that Mrs. Abernathy fought for still fosters similar sentiments from transit users around the Southeast. Mrs. Abernathy was also a successful entrepreneur who had several business endeavors in Atlanta, Georgia. She held a high position with Mary Kay for over 20 years and had to find her way to and from client homes. Just like today’s working folk Mrs. Abernathy was no stranger to hard work and perseverance. Today’s entrepreneurs, students, hourly workers and business professionals save time and money by using the same public transportation systems across the country that Mrs. Abernathy pushed for.