Shortly after Donald Trump won the presidency in 2016, a debate broke out about the future of the Democratic Party: Should it work to recapture white voters who had fled and voted so overwhelmingly for Republicans? Or should Democrats continue down the path of so-called "identity politics" and double down on efforts to build a racially diverse coalition of voters?

Thanks to developments this week, we can put that choice in clearer terms: Are Democrats going to be the party of Joe Biden or Ta-Nahesi Coates?

Judging by the early returns, Bidenism has a limited future. The real question, perhaps, is whether his approach is still potent enough that he can win the presidency in 2020?

The likely answer: no.

Let's rewind to last Tuesday night. Biden, the former vice president and current Democratic presidential candidate, caught flack after he decided to profess nostalgia for the early 1970s, a time when he could work side-by-side in the Senate with notorious Democrat segregationists like Sens. James O. Eastland of Mississippi and Herman Talmadge of Georgia and still get stuff done.

"I was in a caucus with James O. Eastland. He never called me 'boy,' he always called me 'son,'" Biden said Tuesday at a New York fundraiser, adding: "You go down the list of all these guys. Well guess what? At least there was some civility."

The backlash was fierce. Even Sen. Cory Booker — the New Jersey Democrat who has tried to power his presidential campaign on good vibes and avoiding confrontation — called out Biden. "I have to tell Vice President Biden, as someone I respect, that he is wrong for using his relationships with Eastland and Talmadge as examples of how to bring our country together," Booker said.

Coates, meanwhile, isn't running for anything — he is a writer, not a politician.

But his advocacy for racial justice represents an important constituency within the Democratic Party: His 2014 cover story for The Atlantic called "The Case for Reparations" stirred a dormant debate on the issue. On Wednesday, he went before a House subcommittee to make a passionate, detailed plea for the government to start work on the topic.

The question of reparations for slavery and Jim Crow, Coates said, "is one of making amends and direct redress, but it is also a question of citizenship." He added: "This body has a chance to both make good on its 2009 apology for enslavement, and reject fair-weather patriotism, to say that this nation is both its credits and debits."
…

Right now, Democrats seem to be trying to have it both ways: The Coates agenda is front-and-center in Congress, after all, while Biden remains at the head of the party's presidential pack.

But the tension can't last forever — and neither will liberal nostalgia for buddying up with Democrat segregationists.

Joe Biden may or may not win the 2020 nomination, but one thing is increasingly clear: He has already lost the battle for the Democratic Party's future.

CLICK HERE TO VIEW THE REST OF THIS ARTICLE.

THE BAD ECONOMICS OF REPARATIONS 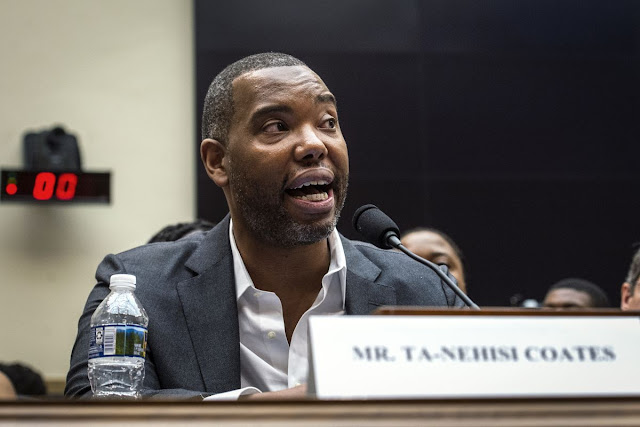 Last week a House Judiciary subcommittee held a hearing on reparations at which activist Ta-Nehisi Coates testified. Coates told the committee that before the Civil War, nearly half of the economic activity of the United States was generated by cotton produced by slaves.

This was an implausible claim on its face, for those who know anything about the pre-Civil War economy.

Had it been true, the South might well have won the war.

Nevertheless, Coates’s assertion was widely repeated in the pres.

Coates’s numbers come from Cornell University historian Ed Baptist’s 2014 book The Half Has Never Been Told. In a key passage in the book, Baptist purports to add up the total value of economic activity that derived from cotton production, which at $77 million made up about 5 percent of the estimated gross domestic product (GDP) of the United States in 1836.

He proceeded to double and even triple count intermediate transactions involved in cotton production — things like land purchases for plantations, tools used for cotton production, transportation, insurance, and credit instruments used in each.

Eventually that $77 million became $600 million in Baptist’s accounting, or almost half of the entire antebellum economy of the United States.

The calculation of GDP, the main formulation of national accounts and a representation of the dollar amount of economic activity in a country in a given year, only incorporates the value of final goods and services produced.

The rationale for doing so comes from accounting, as the price of the final good already incorporates intermediate transactions that go into its production and distribution.

Baptist’s numbers are not only wrong — they reflect a basic unfamiliarity with the meaning and definition of GDP.

This is not a mistake that could be made in good faith by anyone with even a passing acquaintance with economics.

When The Half Has Never Been Told first appeared in print, economists immediately picked up on the error. Bradley Hansen of Mary Washington University kicked off the scrutiny by posting a thorough dissection of Baptist’s errors on his personal blog.

Economic historians Alan Olmstead (UC-Davis) and Paul Rhode (University of Michigan) chimed in with a devastating critique of Baptist’s empirics, observing that a continuation of his “faulty methodology by summing the ‘roles’ of cotton with a few other primary products” would yield an amount that “easily exceed[ed] 100 percent of GDP” in the antebellum United States — an economic impossibility.

Slave-produced goods accounted for “the mid to high single digits, not the 50 percent claim that Coates repeated.”

In short, this is one more case of the Left making “facts” up to support its radical political agenda.

https://www.powerlineblog.com/archives/2019/06/the-bad-economics-of-reparations.
Posted by Frances Rice at 9:55 AM