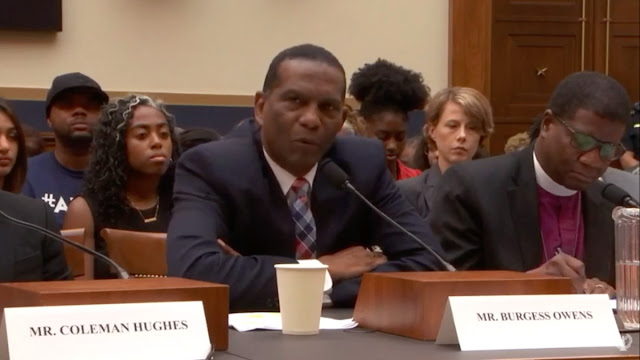 Testifying to the House Judiciary Subcommittee on the Constitution, Civil Rights, and Civil liberties Wednesday, former Oakland Raider Burgess Owens shocked the room by reminding the Democrats their party was the party of slavery.

Democrats had set up the hearing to inquire about passing slavery reparations for black Americans. Owens, a conservative, submitted that if any modern Americans should be held responsible for the evils of slavery and forced to pay restitution for it, it should be the Democratic Party.

“I used to be a Democrat until I did my history and found out the misery that that party brought to my race,” Owens said.

He continued, "I do believe in restitution. Let's point to the party that was part of slavery, KKK, Jim Crow, that has killed over 40% of our black babies, 20 million of them. State of California, 75% of our black boys can't past standard reading and writing test, a Democratic state. Let's pay reparation. Let's pay restitution. How about a Democratic Party pay for all the misery brought to my race."

The Democrats were left speechless.

Author: Chris Pandolfo is a staff writer and type-shouter for Conservative Review. He holds a B.A. in politics and economics from Hillsdale College. His interests are conservative political philosophy, the American founding, and progressive rock. Follow him on Twitter for doom-saying and great album recommendations @ChrisCPandolfo.


https://www.conservativereview.com/news/boom-burgess-owens-drops-truth-bomb-says-democrats-need-pay-reparations-slavery/?utm_source=cr-content&utm_medium=email&utm_campaign=newsletter-default&utm_term=cr&utm_content=cr-burgess-owens-slavery-reparations-graphic-062019-cr-content
Posted by Frances Rice at 11:23 AM