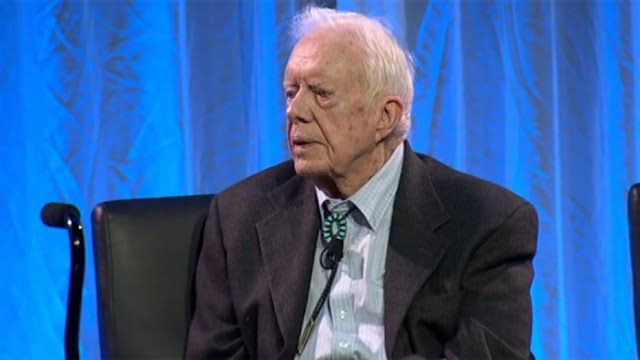 Jimmy Carter’s latest is at best delusional. It seems almost inconceivable that a former president would say something like this, but we live in a time when all norms have been abandoned by the Democratic Party:

There is no doubt that the Russians did interfere in the election.

By buying a tiny handful of Facebook ads that promoted Donald Trump, Bernie Sanders and Jill Stein, and attacked Marco Rubio and Hillary Clinton, and, allegedly, by phishing the DNC’s email system with the result that more people became aware of the obvious fact that the DNC had helped Hillary get the nomination.

And I think the interference, though not yet quantified, if fully investigated would show that Trump didn’t actually win the election in 2016. He lost the election and he was put into office because the Russians interfered on his behalf.

For anyone in public life to utter such an absurdity, let alone a former president, is contemptible. But let’s recall that Jimmy Carter is not exactly a reliable source when it comes to elections. A reader reminded me of this news report from September 2012:

Former US President Jimmy Carter has declared that Venezuela’s electoral system is the best in the world.

Speaking at an annual event last week in Atlanta for his Carter Centre foundation, the politician-turned philanthropist stated, “As a matter of fact, of the 92 elections that we’ve monitored, I would say the election process in Venezuela is the best in the world.”

…Carter also disclosed his opinion that in the US “we have one of the worst election processes in the world, and it’s almost entirely because of the excessive influx of money,” he said referring to lack of controls over private campaign donations.

The comments come with just three weeks before Venezuelans go to the polls on 7 October, in a historic presidential election in which socialist incumbent President Hugo Chavez is standing against right-wing challenger Henrique Capriles Radonski of the Roundtable of Democratic Unity (MUD) coalition.

Chavez welcomed Carter’s comments, stating yesterday that “he [Carter] has spoken the truth because he has verified it. We say that the Venezuelan electoral system is one of the best in the world”.

Chavez also reported that he had had a forty minute conversation with the ex-Democrat president yesterday, and said that Carter, “as Fidel [Castro] says, is a man of honour”.

You could say that Carter is a long-time Communist dupe, but that might be too kind. Here is a more sober view of the quality of Venezuela’s 2012 election:

For nearly 14 years, Hugo Chavez labored with tireless energy, undeniable charisma, and ruthless design to destroy the opposition, silence critics, and intimidate skeptics, all while leaving the Potemkin façade of a “democracy”.

These conditions have made Venezuelan elections under Chavez utterly unfair. Judges who ruled against Chavez were imprisoned. Those that remain openly declared their fealty to him.

The previous opposition presidential candidate is in exile. Businessmen who supported opposition candidates were investigated and expropriated. Labor leaders who opposed the government were imprisoned. Opposition radio and TV stations were shut down, denied permits, and fined. Those that survived engaged in self-censorship.

***
The electoral campaign process, meanwhile, was patently unfair. Chavez had unlimited use of state funds and state infrastructure to carry out his campaign.

… The ruling party campaign was lavishly and freely financed with state funds, while the opposition was denied any public financing whatsoever (and Venezuelan businessmen knew they faced expropriation, or worse, if they openly supported the opposition campaign).

Then there was perhaps the most critical element of a modern election campaign: access to the mass media. Via the arbitrary issuance and withdrawal of licenses, Chavez enjoyed the support of all but one TV channel in the country. On top of all this, during the campaign Chavez regularly commandeered all of the airwaves, citing presidential privilege.

The process is aptly named cadenas (chains) and compels all TV and radio stations, no matter the ownership or their politics, to broadcast the president’s speeches in full–no matter how long the tirade. Chavez’s “chains” had the effect of crowding out any significant news regarding the opposition.

For instance, on September 17, 2012, during one of the largest rallies in the Capriles campaign, hundreds of thousands turned out to hear him speak in a Caracas park. The event was broadcast live all around the country on radio and TV. However, shortly after Capriles began to speak, Chavez abruptly cut him off by declaring another cadena, in which he extolled the virtues of the current Venezuelan state and the benefits of socialism.
Finally:

A pre-election poll in Venezuela indicated that 40 percent of those questioned did not believe their ballots would be secret and 30 percent stated that this intimidated them.

…Venezuela has a sordid precedent of violating the democratic principle of ballot secrecy from the 2004 referendum petition, which sought to remove Chavez from office in a recall election. Chavez famously warned: “Whoever signs [the petition] against Chavez… their name will be there, registered for history, because they’ll have to put down their first name, their last name, their signature, their identity card number, and their fingerprint.”

This registry of names was later published by a chavista congressman, Luis Tascón, on his personal website. The “Lista Tascón” was used to create an apartheid-like system, dividing Venezuelans into those who “had signed against the president” and those who were loyal to Chavez.

Public employees lost their jobs, those seeking employment were instantly disqualified, and identification papers became hard to get for those who had dared sign the recall petition. Citizens seeking loans from state banks were told they had opted out of any assistance due to their disloyalty to Chavez.

This is the system that Jimmy Carter loved, and that many Democrats, including Bernie Sanders, praised.