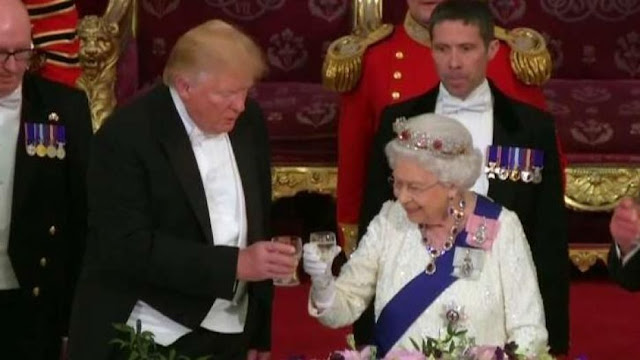 President Trump capped off the first day of his London visit Monday by dining with Queen Elizabeth and other members of the royal family at a lavish state banquet at Buckingham Palace, ending a busy day that saw the president taking in the sights of the British capital.

Both Trump and the queen offered formal toasts ahead of the dinner.

“Visits by American presidents always remind us of the close and lasting relationship between the United Kingdom and the United States,” Queen Elizabeth said in her toast, before referencing the Allied mission on D-Day during World War II.

“We owe an immeasurable debt to the joint British, American and Allied forces that landed in Normandy on June 6, 1944,” the queen said. “The anniversary of D-Day reminds us all of all our country has shared together.”

Trump is set to travel to Normandy later this week to commemorate 75 years after the Allied invasion of France.

In his toast, Trump reaffirmed the close ties between London and Washington – noting the countries' joint effort in defeating Nazi Germany during World War II.

“The bond between our nations was sealed in that great crusade,” Trump said. “We reaffirm our common values that will continue well into the future.” 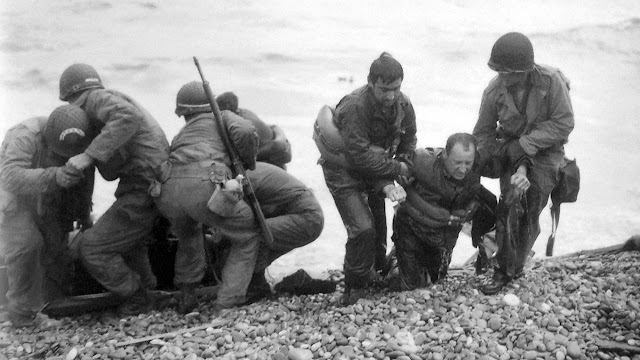 The state dinner on Monday was attended by a number of members of the royal family, the British government and the Trump administration. Notably absent, however, was the queen's husband, Prince Philip, who at 97 has retired from his royal duties.

At their initial visit to the palace early Monday morning, the president and first lady Melania Trump had a private lunch with the queen, later inspecting a collection of artifacts including an 18th-century map of New York, historic photos of golf at St. Andrews and books about birds and George Washington. He then participated in a wreath-laying at the Grave of the Unknown Warrior at Westminster Abbey.

The visit began with formalities befitting a state visit. The Trumps were greeted by Prince Charles and his wife, Camilla, the Duchess of Cornwall, at the palace. Trump could be seen chatting with members of the Guard of Honor as the rest of the American delegation, from a terrace, observed the elaborate arrival ceremony, complete with the playing of “The Star-Spangled Banner.” Royal gun salutes were fired from nearby Green Park and from the Tower of London.
… 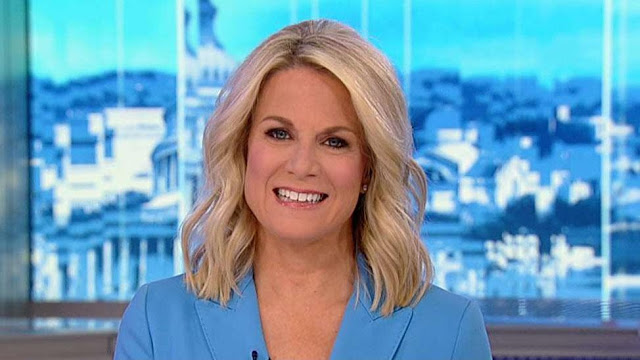 Trump is to remain in the U.K. from Monday to Wednesday, which comes at a tumultuous time in British politics, with Prime Minister Theresa May due to step down on Friday. 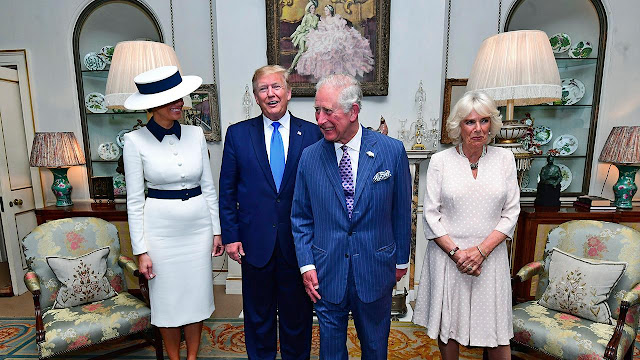 CLICK HERE TO VIEW THE VIDEO:
President Trump, first lady arrive for tea with Prince of Wales, Duchess of Cornwall

Trump is scheduled to make his first presidential visit to Ireland on Wednesday, spending two nights at his golf club in Doonbeg, which sits above the Atlantic.
…

The centerpiece of the president's European trip: two days the D-Day landing, likely the last significant commemoration most veterans of the battle will see.

The events are to begin in Portsmouth, England, where the invasion was launched, and then move across the Channel to France, where Allied forces began to recapture Western Europe from the Nazis.

Fox News’ Judson Berger and The Associated Press contributed to this report.