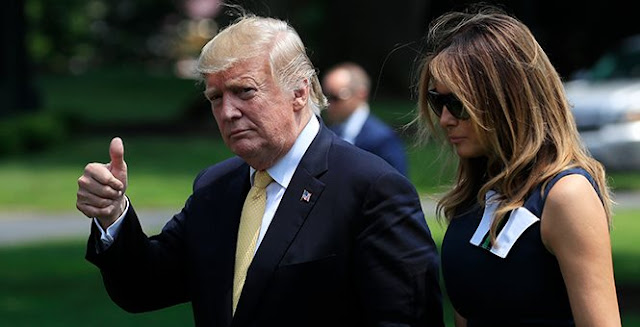 There have been ongoing fears that the Trump administration’s escalating trade war with China could send us off the rails. The stock market has been volatile. The White House recently announced a $15 billion program to help farmers impacted by the tariff conversations and threats.

The administration is playing the short-term pain for long-term game strategy, which isn’t all that popular with past Republican on this policy; many would see this as a pork program. Yet, after three presidencies of failing to tackle China on trade, what have we got to lose? China has noticed that this is a White House that has teeth and one that’s coming after them on multiple fronts. They respect that as well, viewing him as a master tactician.

This issue will linger.

For now, the economy is growing and talk of a recession should be put to rest (via CNBC):

The U.S. economy grew by 3.1% to start the year, slightly better than expected and providing some relief at a time when recession fears are accelerating, the Commerce Department reported Thursday.

First-quarter gross domestic product beat the 3% Dow Jones estimate but was lower than the initial 3.2% projection from the Bureau of Economic Analysis. The decrease came due to downward revisions to nonresidential fixed and private inventory investment, two key drivers to GDP.

Exports rose 4.8% amid the increasingly bitter trade war between the U.S. and China, while imports, which are a subtraction from GDP, declined 2.5%. The level of net exports contributed nearly 1 percentage point to the GDP gain.

In the bigger picture, growth easily surpassed what most economists had been expecting at the start of the year. At one point, the Atlanta Federal Reserve was estimating GDP to rise just 0.2%. Strong contributions from real gross domestic income helped drive the better numbers, as did a rise in exports, state and local government spending and nonresidential fixed investment.

“The president showered the U.S. Air Force Academy’s graduating class with praise and encouragement as they are ‘ready to fly, fight, and win,’” Madison Summers reports. “During the ceremony, Trump announced that he would shake ‘every single hand’ of the nearly [1,000] graduates as they walk across the stage.”

“More than 1,000 illegal immigrants were apprehended by U.S. Customs and Border Protection agents near the U.S.-Mexico border early Wednesday—the largest ever group of migrants ever apprehended at a single time,” John Roberts and Travis Fedschun report. “The fact is that [the Rio Grande Valley] is receiving caravan-equivalent numbers every seven days,” Sector Chief Patrol Agent Rodolfo Karisch said.
____________________

“President Trump sent a message of strength and leadership Thursday night when he announced he will impose escalating tariffs on Mexico in a bold move to halt the flow of illegal immigrants and protect our national security,” National Border Patrol Council President Brandon Judd writes. “The congressional inaction we are now witnessing is made worse by Mexico’s refusal to enforce its own immigration laws, which are actually much stronger than our own.”
_____________________

Democrats Should Forget Impeachment and Turn the Page

“It would be divisive for the nation and a boon to our global competitors if Democrats choose to hobble our national agenda with superfluous, partisan impeachment,” Carrie Sheffield writes. “Clearly, Mueller is moving on and it's time for us to move on as a country, too . . . By a nearly 20-point margin, the American people do not want impeachment, according to polling by the Washington Post and ABC News.”
______________________

My Fellow Democrats Are Skeptical About the USMCA. They Shouldn't Be

Trump Trip to Japan Will Benefit US and Our Allies

“President Trump’s just-concluded visit to Japan was more than ceremonial,” Brett Velicovich writes. “By strengthening our relationship with steadfast allies such as Japan, the president has placed America in an even better position to pacify the North Korean regime and bring an end to one of the biggest global security challenges of the century.”

“President Donald Trump spoke Tuesday to 1,000 sailors and Marines and a few servicemembers from other branches aboard the [USS Wasp], which was moored at Yokosuka Naval Base” in Japan, Seth Robson reports. “The president also surprised an enlisted sailor and Marine by calling them onto a stage and inviting them to say a few words of their own.”

A Tariff Issue on Which Free and Fair Traders Can Agree

“American exporters face systematically higher tariffs in the markets of more than 100 U.S. trading partners,” White House Director of Trade and Manufacturing Policy Peter Navarro writes. “Whether you’re a pure free trader or a fair, reciprocal and balanced trader like the president, if you live in a relatively low-tariff country like the U.S., you should oppose an international trading system that helps institutionalize nonreciprocal tariffs.”
Posted by Frances Rice at 1:42 PM