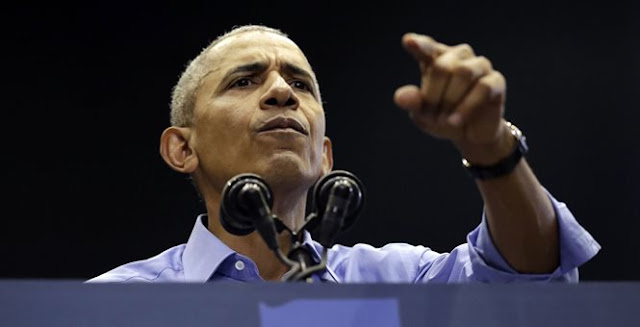 Economic and regulatory policies play out in the economy in the market in two ways.

First, they are anticipated. That's why the market tanked 16 percent in the 4 months after Obama was elected and rose 12 percent after Trump -- and kept rising.  Americans knew Obama’s policies would be bad, and Trump’s would be good.

Once implemented, policies begin to work.

Depending on their aggressiveness, and both Obama's and Trump's were, the effects would be seen after about a year, and certainly after two.

Economically-illiterate Democrats love to believe that any economic success that President Trump’s administration has enjoyed is simply due to the brilliant stewardship of the economy under Obama.  Trump is just riding his coattails!

This is not only risible. It defies the fundamentals of economics and logic.

Were that true, then Trump's policies would be the same as Obama's. He would have continued them.

They aren't. They are the opposite.

Opposing policies would not result in the same economic growth trajectory.  That’s straight out of Paul Krugman Bizarro World.

How bad were Obama’s policies?

Obama's average during his eight years was 1.9 percent growth. That is the worst post-recession recovery in history. Yes, he started out with a very serious recession on his hands, but policies take 1-2 years at most to take effect.

Obama had eight years, and the results were lousy.
Heck, maybe we’re being too harsh on him.  Let's help him out and look at the GDP growth average in just his last 3 years, when the numbers were more in his favor.

In fact, let's black out the entire first year of his Presidency when GDP growth was negative every quarter.

And then, let’s further back out every quarter where GDP growth was less than 2 percent.

How bad is that?  The average GDP growth since 1930 has been 3.3 percent.   That includes the Great Depression and every single other recession since then.

Democrats call that a success.

How what about a comparison?  Maybe Obama was up against a really tough recession that would take a full eight years to come out of.

Let's look at President Reagan, post-Carter. The recession then was not as bad in some ways, but was worse in others. Both Obama and Reagan faced a situation in which the entire previous year saw no growth and increasing unemployment.

Reagan arguably had it worse because inflation and interest rates were at 20 percent!

In his eight years in office, the GDP averaged 3.1 percent growth. And that includes 7 of his first 9 quarters in which growth was negative.

If we back those out, GDP growth averaged a whopping 4.5 percent per quarter.

And just so we're being fair, let's back out all the quarters where GDP was less than 2 percent.  In Reagan’s case, that was only one quarter.  That’s right, folks.  For five of his eight years in the White House, GDP growth exceeded 3 percent.

Still, let's throw out Trump's entire first year, like we did with Obama. We only have a year's worth of data but on that basis, and Trump's average GDP growth is 2.9 percent.

He is already killing Obama’s tally.

So why do Democrats insist that, despite Trump’s opposing policies, any economic success is the result of Obama?

Only an idiot or a Democrat believes that Reagan’s policies – the opposite of Obama’s and Carter’s --  would somehow result in a continuation of Carter’s lousy performance.
Oh, I think I answered my own question.

https://townhall.com/columnists/lawrencemeyers/2019/06/08/yes-obamas-economic-policies-really-were-that-bad-n2547474
Posted by Frances Rice at 8:28 AM