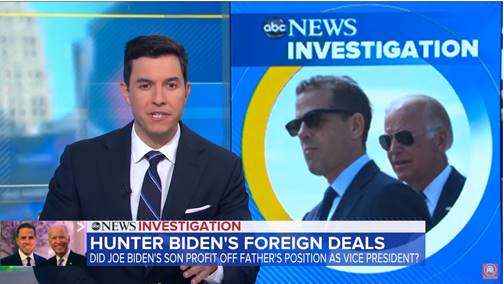 ABC is out with an absolutely brutal report this morning on Joe Biden and his son’s “huge” conflicts of interest stemming from Hunter Biden’s work in Ukraine and China while Joe was VP.

While Joe Biden was conducting diplomacy in Ukraine and China, Hunter Biden was hot on his father’s heels cashing in on lucrative Ukrainian natural gas deals and an investment opportunity with a government-owned Chinese bank.

Democratic presidential candidate Joe Biden declined to answer questions on the campaign trail this week about his son's overseas business dealings in countries where the then-vice president was conducting diplomatic work, an issue his political opponents have already begun to wield against him as he wades into the 2020 presidential campaign.

More than once, after his father engaged in diplomacy on behalf of the United States in foreign countries, Hunter Biden conducted business in the same country. At two separate campaign stops on Monday, Biden avoided questions about his son while his staff blocked reporters from approaching the candidate.

Biden's campaign did provide ABC News with a statement saying the former vice president has always adhered to "well-established executive branch ethics standards," adding that if Biden wins the White House he will issue an executive order to "address conflicts of interest of any kind."

"This process will be set out in detail in the executive order," the statement reads, "that President Biden would issue on his first day in office."

The ethics pledge follows renewed questions about a pair of overseas business opportunities involving Hunter Biden – one in Ukraine, another in China – that already have begun to generate political attacks from Joe Biden's conservative critics. Ethics experts interviewed by ABC News said these are legitimate questions about possible past and future conflicts of interest.

In April of 2014, the then-vice president led a U.S. delegation to Kiev tasked with rooting out corruption and advocating for Ukraine to diminish its reliance on Russian oil. The Obama administration had pledged aid money to support a fledgling Ukrainian administration recovering from a revolution that ousted the country's previous leader.

"You have to fight the cancer of corruption that is endemic in your system right now," Biden told the Ukrainian parliament during the first of several post-revolution visits to the country. "And with the right investments and the right choices, Ukraine can reduce its energy dependence and increase its energy security."

Within weeks of his visit, Ukraine's largest energy producer, Burisma Energy, appointed Hunter Biden to a paid directorship on the firm's board.

Just months before, in December of 2013, there was a similar episode when the then-vice president led an Obama administration effort to tamp down tensions in the Far East. Hunter Biden disembarked from Air Force Two in Beijing alongside his father, ahead of a series of meetings between the vice president and several high-ranking members of China's ruling party. Upon his departure, Joe Biden called Chinese President Xi Jinping a "good friend."

Within weeks of that visit, Hunter Biden was doing business there, as a participant in a firm called Bohai Harvest RST. The corporation formed a novel Chinese-American investment partnership that involved such Chinese state-owned firms as the Bank of China. Reports at the time said they sought to raise $1.5 billion.

In response to questions from ABC News, Hunter Biden maintained that he and his father never talked about his overseas ventures.

"At no time have I discussed with my father the company's business, or my board service," Hunter Biden said in statement forwarded to ABC News by his attorney. "Any suggestion to the contrary is just plain wrong."

An attorney for Hunter Biden told ABC News the vice president's son merely accompanied his daughter, Finnegan Biden, on the Air Force Two trip to Beijing and conducted no business during the visit.

Robert Weissman, the president of progressive watchdog group Public Citizen and a frequent critic of business dealings by President Donald Trump's children -- including the Trump Organization's ongoing development projects overseas -- told ABC News that it can be challenging for the adult children of well-known political figures to carve out careers that don't pose ethics concerns, but he considers Hunter Biden's decisions concerning.

"At absolute minimum there's a huge appearance of conflict, and there's every reason to think that the investors that he‘s working with want him partnering with them because he's the son of the then-vice president and now presidential candidate," Weissman said. "[Joe Biden] should have encouraged his son to not take these positions."

The Ukrainian energy firm Burisma tapped Hunter Biden -- a Yale-trained attorney who worked at the Manhattan-based law firm Boies Schiller Flexner LLP -- to lead its legal unit and "provide support for the company among international organizations," according to the company's announcement at the time.

Hunter Biden and his associate at a business entity called Rosemont Seneca Partners -- where Hunter Biden was a managing partner -- both obtained board seats, and according to banking records reviewed by ABC News, the firm began collecting $166,666 payments each month.

In a statement to ABC News, Biden said "at no time" was he "in charge of the company's legal affairs" and said he "earned [his] qualifications for such a role based on [his] extensive prior board service." Hunter Biden had served on other corporate boards, including as vice chairman of the board overseeing Amtrak. He had no known experience in Ukraine or the highly competitive energy field, but said in his statement that he joined the board "to help reform Burisma's practices of transparency, corporate governance and responsibility."
…

More details of his work for Burisma surfaced in the 2018 book "Secret Empires" by conservative author Peter Schweizer, and as Biden moved closer to announcing his bid for the White House, news reports began focusing greater attention on the burgeoning controversy. Reports in The Hill and The New York Times noted that the vice president's reform campaign in Ukraine included an effort to call for the dismissal of Viktor Shokin, then the country's controversial chief prosecutor. The reports noted that Shokin had ostensibly been leading an investigation into Burisma and its founder, Mykola Zlochevsky, for possible financial crimes.

Both Zlochevsky and the company have denied wrongdoing and neither have faced charges, but in an interview with ABC News, Shokin maintained his suspicions about the vice president's motives, accusing Biden of promoting his dismissal for personal reasons. He insisted he had "no doubt" Biden wanted him gone in an effort to protect his son's new employer.

"Biden was acting not like a U.S. vice president, but as an individual," Shokin told ABC News, "like the individual interested in having me removed -- having me gone so that I did not interfere in the Burisma investigation."
…

Even one of the activists Biden's team asked ABC News to contact had deep reservations about Hunter Biden's decision to accept a board seat at Burisma.
…

Ukraine is not the only foreign territory in which there are lingering questions about business conducted by Hunter Biden.

His exact role in the Chinese investment fund Bohai Harvest RST remains unclear. The firm's website described the venture as being "sponsored" by the government-controlled Bank of China, and securities filings in the U.S. say the fund was "to focus on mergers and acquisitions, and investment in and reforms of state-owned enterprise." …