A big Wednesday for 'populists' on both sides of the Atlantic 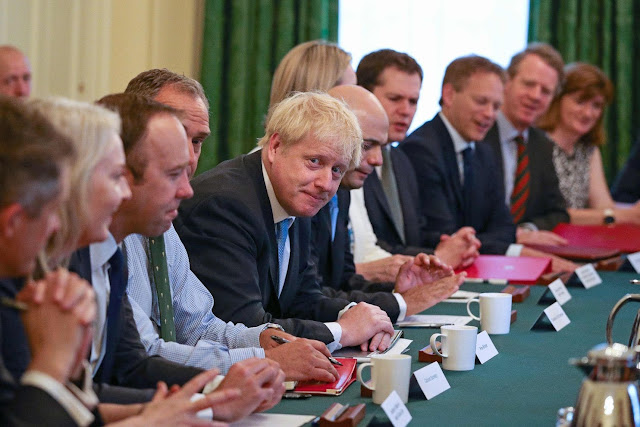 Power shifted Wednesday, on both sides of the Atlantic.

In Washington, the dim performance of former special counsel Robert Mueller, in the hearings House Democrats insisted on, took the last air out of the Collusiongate balloon. The notion that President Trump would be hounded out of office has been revealed as the fantasy it always was.

In London, Boris Johnson met with Queen Elizabeth II and left Buckingham Palace as her 14th prime minister. He proceeded to No. 10 Downing Street and reiterated his promise to deliver Brexit by the statutory deadline of Oct. 31.

Some observers will depict these two events as steps forward for populist politics, personified in the two exotically coifed Anglosphere leaders. Trump has been saying nice things about Johnson for more than a year now, and Boris has been praising Donald (and conveniently forgetting disparaging comments he made years ago).

But they’re not really clones. Trump was a real estate developer and a reality TV show host. Johnson worked as a journalist, editor of the weekly Spectator at age 35 and a highly paid columnist for the Telegraph up through last Monday. Trump famously doesn’t read books. Johnson has written nine of them, including a novel and a biography of Winston Churchill.

Many Johnson critics regard him as a buffoon, who wisecracks his way through serious difficulties and masquerades as a P.G. Wodehouse-style befuddled aristocrat. My sense is that he cultivates this persona, complete with references to ancient Greek philosophy, to make what might otherwise be pedestrian politicking distinctive and memorable.

It also bears remembering that Johnson was elected mayor of London in 2008 and re-elected in 2012, as a Conservative in a city that has usually voted Labour, and that the city prospered, and crime dropped, in his years in office. For all his fusty oratory, he supports metropolitan values like gay rights and celebrates the metropolis’ rapidly increasing ethnic diversity.

All of which he considers consistent with his support for Brexit, in the campaign running up to the June 2016 referendum and today. More British citizens voted in that clearly worded referendum than in any other election in the nation’s history, and they approved of leaving the European Union by a solid 52% to 48% margin.

As I noted at the time, Brexit in Britain, like President Trump in the United States, sparked a political realignment, with the capital pitted against the countryside, the elites ensconced in the very largest metropolitan areas versus small-town traditionalists and their former partisan opponents in beleaguered mining and manufacturing centers. London (and Scotland) voted 60% against Brexit, the rest of England 57% in favor.

By endorsing Brexit, the Eton and Oxford graduate Johnson opted for the countryside, just as Trump did even when riding down an escalator off Fifth Avenue. Globalist elites responded with scorn — until the votes were counted. Then, far from taking defeat in sportsmanlike stride, as Richard Nixon did in 1960, to take just one example, they went to work trying to undermine the legitimacy of the result and to reverse it by fair means or foul.

The voters on the winning side were racists, they claimed, voting to suppress people of color, manipulated by crafty Russians, old people resisting the future. In America, they bogged down the Trump administration by blocking appointments and promoting lengthy investigations of far-fetched charges. In Britain, the unelected civil servants on whom Prime Minister Theresa May relied worked with unelected European Union leaders to block Brexit from ever happening.

Some establishment types may really believe that Trump is Hitler and that Brexit will plunge Britain into another Great Depression. Most of them drip with contempt for ordinary citizens and, astonishingly, seem to think it entirely healthy and consistent with democracy to overturn the decision of the voters. They’re sure they’re better than ordinary people.

Those attitudes are unjustified. Johnson’s three top Cabinet appointees are of Muslim, Hindu, and Jewish ancestry: Nationalism doesn’t mean white supremacy. He’s looking for advice not from unelected civil servants but, reportedly, from Dominic Cummings, mastermind of the 2016 Leave campaign, who has repeatedly outstrategized them.

Politically, Johnson is in no position to break his promise to deliver Brexit, with or without an EU agreement, by Oct. 31. He brushes aside establishment predictions of economic disaster (all wrong so far) and talks of what his “amazing country” will do freed of undemocratic EU ukases, like its ban on genetically modified crops.

Power is shifting, how far we shall see.