How to Put Citizenship Back in the Census

By David B. Rivkin Jr. and Gilson B. Gray | The Wall Street Journal 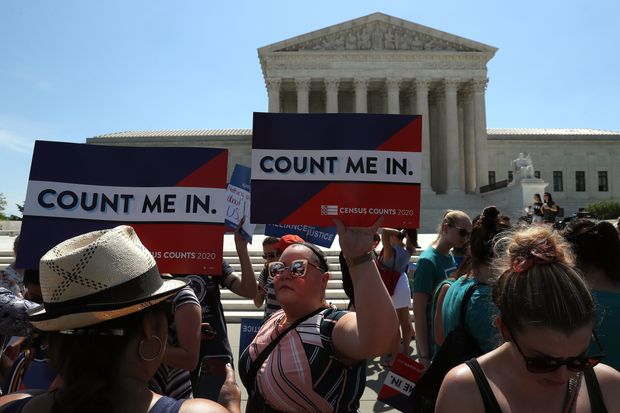 The 14th Amendment gives the Trump administration the justification it needs.

The Trump administration said Wednesday it will attempt to add a citizenship question on the 2020 census while complying with the Supreme Court’s ruling in Department of Commerce v. New York.

Five justices held that the Census Act allows the question, but a separate five-justice majority found the rulemaking that added the question was procedurally deficient. There is a way forward. The Constitution itself requires the collection of citizenship information.

Section 2 of the 14th Amendment provides that if a state denies the franchise to anyone eligible to vote, its allotment of House seats shall be “reduced in the proportion which the number of such . . . citizens shall bear to the whole number of . . . citizens . . . in such state.” This language is absolute and mandatory. Compliance is impossible without counting how many citizens live in each state.

The 14th Amendment was adopted in 1868, and this provision meant to secure the voting rights of newly freed slaves. But it wasn’t limited to that purpose. An earlier version of Section 2, introduced in 1865, specifically referred to limits on suffrage based on “race or color,” but the Senate rejected that limitation. The amendment forbids state interference with the rights of all eligible voters (then limited to males over 21).

Section 2 also applies to every state, a point Rep. John Bingham, the amendment’s principal drafter, emphasized during the floor debate: “The second section . . . simply provides for the equalization of representation among all the States in the Union, North, South, East, and West. It makes no discrimination.”

Congress has dealt with suffrage-abridgement problems through other constitutional and statutory means, especially the Voting Rights Act.

But that doesn’t change the constitutional obligation to obtain citizenship data.

Significantly, the last time the Supreme Court addressed Section 2, it emphasized the need to give effect to both Section 1, which includes the Equal Protection Clause, and 2 of the 14th Amendment. That case, Richardson v. Ramirez (1974), involved an equal protection challenge to California’s policy of disfranchising felons.

The president should issue an executive order stating that, to comply with the requirements of Section 2 of the 14th Amendment, the citizenship question will be added to the 2020 census.

In addition, he can order the Commerce Department to undertake, on an emergency basis, a new Census Act rulemaking. That would trigger another round of litigation.

Opponents would choose a federal district court likely to block it again, and the Justice Department would have to seek the Supreme Court’s intervention during its summer recess. While rare, such an emergency review has happened before. With the justification for the citizenship question being clear and compelling, the administration should prevail.

Messrs. Rivkin and Gray are lawyers, based in Washington and New York respectively.