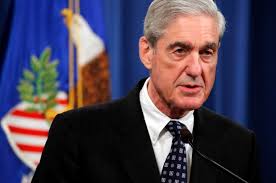 Nowhere is the collapse of the Democratic Party as a coherent political organization more evident than in the astounding metamorphosis of Robert Mueller.

He returned to public notice as special counsel and was instantly heralded by the Democratic media as a virtual Douglas MacArthur of selfless national duty, precisely the sort of rigorous, incorruptible, no-nonsense public servant who would tear the Trump fraud of corruption and artificiality, dirty tricks, shady accounting, and outrageous misbehavior apart and expose the whole rotten mess that had, by nightmarish mischance, moved into the White House (where the Clinton pay-to-play casino should already have been installed).

Mueller looked the part: tall, slender, slab-faced, jut-jawed, and unsmiling, all business, and no soft bonhomous weakness for anything but a thorough plumbing of the depths of Trump’s unutterable hucksterism, skullduggery, and larceny. The commentariat, though well gone in the saddle after their long incumbency as the country’s political sages, dressed for the part again and took to the airwaves with the smug confidence of veterans and the zest of those addicted to tearing down administrations they found distasteful.

Disentombed from the obscurity that had long enshrouded him, Carl Bernstein resurfaced, speaking matter-of-factly of imminent impeachment and removal of the usurping miscreant. From Nate Silver to Charles Blow and even the once-professional David Gergen, like a phalanx of bobbleheads, they agreed that impeachment was coming and . . . coming and . . . just around the corner.

Bernstein became so exasperated waiting, he sanctimoniously called Trump a “grifter,” but tempered his judgment with an endlessly repeated theory that Trump’s brain had turned to mush and he was not physically and mentally fit to govern. “We have a constitutional crisis.” Not that anyone else noticed. On and on it has gone, without a thought to professionalism, balance, or anything but another partisan smear job on a non-conformist Republican.

The Bushes after all, were good old boys; you had to have a tame Republican on the top of the Democratic wedding cake from time to time, and at the start, practically all the Republicans in Congress were as appalled at the Trump imposture and intrusion as the Democrats. After all, he ran against them, too.

Mueller packed his investigative team with notorious Democratic partisans. Andrew Weissman, who had cooked his share of Republicans already, and attended Hillary Clinton’s victory party the night she lost to Trump, took over the actual work.

He and many of those he recruited had just finished white-washing Clinton—on to the tarring-and-feathering of her opponent. Mueller, never a martyr to the work ethic, despite the Democratic media’s wall-to-wall effort to spin him as a war hero Republican, flawless FBI director, and a rail-splitting confessant to the chopping of the cherry tree, left the direction of the investigation to Weissman and his gang, all of them desperate to destroy the president.

Perish the thought of any of this pusillanimous bourgeois rubbish about impartiality! Trump was an interloper and he had to be sent packing with such finality that no one would dare interrupt the self-enriching slumbers of the political class for at least another century.

Trump managed the considerable feat of tough-talking as he resisted the depredations of a partisan witch-hunt while completely cooperating and leaving the investigators no ground to allege obstruction. This was the tactically correct response to what instantly was a difficult position. Trump had erroneously promoted an apparently qualified U.S. senator and former prosecutor, Jeff Sessions, as attorney general.

Sessions immediately recused himself on all Russian matters and sat like a great eunuch-toad leaving the president whom he served practically defenseless while this rampaging lynch mob ransacked his personal, corporate, campaign, and presidential records.

The Strzok-Page text messages indicate that the Mueller team ascertained quite quickly that there was no collusion between the Trump campaign and Russia, and in fact, no nominee of any serious party to the presidency of the United States in its history would ever have partaken of such an evil and preposterous enterprise.

From early on, Mueller’s game was obstruction. He piled demands on the president, required sworn testimony over several days from the White House counsel (who should have immunity in respect of his chief client). The president’s tactic of talking tough while furnishing everything asked by the special counsel got him through the midterm elections.

Few commentators noticed that the big winner in those elections was not the Democrats but the president. When he started out in January 2017, there were demonstrations all around the world and though the Republicans were in nominal control of both houses of Congress, in fact they were both controlled by coalitions of Democrats and NeverTrump Republicans. They sand-bagged the president on health care reform, the Republicans strutting in their hypocrisy, having voted many times to repeal Obamacare while Obama was there to veto their votes.

The only place Trump could get a consensus was in appointing conservative judges who would generally adhere to the Constitution and the relevant legislation, (a terrible inconvenience for the Democratic addicts to the authoritarian state). Then he cobbled together the necessary votes for his tax cut and reform package, which has proved an immense success.

The Republicans lost the House in the midterm elections, but Trump never had the majority anyway. His speaker, Paul Ryan, was a conflicted NeverTrumper and retired. But in the Senate, he added two senators as three NeverTrump Republicans—Bob Corker of Tennessee, Jeff Flake of Arizona, and John McCain—departed; in the case of McCain, by dying and causing his funeral to be a tasteless bipartisan Trump-bashing session. This shifted the balance in the Senate.

Trump then fired Sessions, appointed an unsurpassably competent and upright replacement, William Barr, who had held the position under George H. W. Bush. Barr ordered Mueller to wind down his investigation, which Mueller and his sponsors had apparently hoped to keep going through the next election. Trump’s enemies had thought it was their right to have an impeachment-launching special counsel lurking around the White House ready to pounce on anything the Trump-hating media could confect into a cause for removal.

Mueller, the lion of official redemption, failed again and again. He had to choose between keeping faith with his rabidly Trump-hating sponsors, or his claims to professional integrity. Having found no evidence of collusion by anyone, he tried to leave the door open to impeachment for obstruction. He went down with the ship, and stated his inability to “exonerate” on obstruction.

A special counsel finds adequate evidence of criminal wrongdoing, or not. No one wants or asks him to exonerate anyone. In his summary of the report, Barr said there was no conclusion on obstruction but that he and the deputy attorney general Rod Rosenstein, Mueller’s old side-kick who had protected Mueller all through the phantom Sessions term, and the in-house counsel of the Justice Department, all agreed that the elements of obstruction: a corrupt act for a corrupt purpose in contemplation of a legal action, were all absent in this case.

The pitiful attempt by Mueller to leave Trump a live grenade with the pin pulled was made even more absurd by his attempt to run away and hide. He spoke to the press inarticulately from a printed text for less than 10 minutes, took no questions, and said he would have nothing more to say.

Finally, the two egregious Democratic committee chairman who still claim to have evidence of impeachable offenses by the president but can’t cite any, Representatives Jerry Nadler (D-N.Y.) and Adam Schiff (D-Calif.), both seriously ill-favored men, called Mueller as a witness, and designed a timetable for his appearance clearly intended to prevent the Republican members from really getting at Mueller.

If his stumbling press statement was indicative of his forensic talents, Mueller will have a real sleigh-ride with a gang of Democrats angry because he couldn’t find anything on the president and Republicans who rightly consider his entire performance an unprofessional and morally corrupt operation.

Attorney General Barr has offered him support if he wishes not to appear. The Trump lynch mob has reached the last round-up.

It only remains for Barr and his special prosecutor, John Durham, to indict those who politicized the intelligence agencies and the FBI, fraudulently sought FISA warrants to spy on the Trump campaign, and lied to congressional committees and the FBI.

Those who would use the wheels of justice to persecute the innocent, will be ground to powder by them. Mueller is unlikely to have committed any offenses, but his conduct has been contemptible at every stage.