Gov. Northam Wrote An Op-Ed After VA GOP Torched His Anti-Gun Push, He Should Have Just Shut His Face 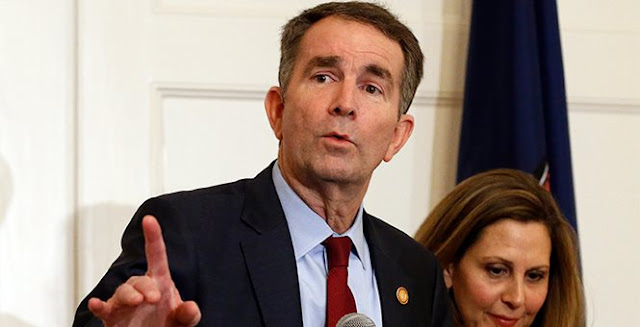 Who the hell does this guy think he is?

Does he think that the Men in Black came in overnight and used their “neutralizer” to wipe people’s memories?

Bro, we remember that you admitted to doing blackface, we know your nickname was “Coonman” at the Virginia Military Institute, and we know your yearbook photo at Eastern Virginia Medical School has one person in blackface and another in full Ku Klux Klan regalia—all of these photos were personally submitted by you.

No one forgot about this, you idiot. No one.

And if you weren’t a Democrat, you would’ve been kicked to the curb months ago.

Your Attorney General also did blackface and your lieutenant governor is facing two charges of rape.

The entire executive administration of this state is morally corrupt. Who cares what you think?

Either way, you were the person in blackface or the Klan outfit. You were a grown adult and you should’ve resigned and spared the state the embarrassment.

But you’re a power-hungry monster, you’re hoping that the Democrats can retake the legislature, which is a possibility, and you know, as a Democrat, you can get away with anything.

So, I guess, good for you for understanding the dynamics of your party and the allies you have in the media to give you miles of political cover.

I mean all Democrats are trash, but you sir, are a particularly heinous creature.

Did you think this political stunt this week was going to rehabilitate your character?

Did you think that using the deaths of those killed in the tragic Virginia Beach shooting in May was going to be your saving grace?

You need to have the moral authority to do that, governor. You don’t.

You moonwalked that off the stage as soon as the photos were unearthed and you yourself confessed to donning blackface, which is widely seen as racist, for a dance competition in Austin, Texas back in the 1980s.

Maybe you would’ve left until the next two clowns that could take over for you couldn’t for their own drama.

This would have given Virginia’s governor’s mansion to the Republicans.

So, you stay and now that the VA GOP nuked your special session on gun control, which included confiscatory policy initiatives, you take to the op-ed pages to try and shame lawmakers, tell them what their job is, and try to carry this holier-than-thou attitude because you wanted to respond to a mass shooting and hope this will wash away your blackface fiasco.

On May 31, around 4 in the afternoon, I was told there had been a mass shooting in Virginia Beach. The number of dead kept climbing as we drove to the emergency operations center. By the end of the night, 12 precious lives had been lost. All of those people had gotten up that morning and gone to work, expecting to leave that night and go home to their families. That didn’t happen. Their lives were taken senselessly.

A few days after the Virginia Beach tragedy, I spoke at the funeral of Markiya Dickson, a 9-year-old girl who was shot and killed while playing with her friends in a Richmond park. Her father stood at the pulpit with his daughter lying in a casket. He spoke about what a wonderful young girl she was, how her favorite color was pink and how everybody at school loved her. And then he said something I will never forget. He said, “We shouldn’t be here.”

And as a governor, I don’t want another governor to get that call about a mass shooting or have to speak at a funeral for a precious 9-year-old girl killed by guns.

On Tuesday, I asked the General Assembly to do something about it. I asked lawmakers to address the emergency of gun violence in Virginia. I asked them to show their constituents and our country that despite our differences, we can come together to save lives.

Legislators came to Richmond Tuesday, but after just 90 minutes, Republican legislators voted to adjourn until November — without hearing any bills, without having any debates and without taking any action to address the crisis of gun violence.

That’s not what they were elected for.

They were not elected to punt or dismiss important issues. They were elected to weigh ideas and discuss differences. Regardless of whether folks agree on solutions, they were elected to take these votes. I expected better of them. I knew better than to think there would be an easy agreement, but I did expect our elected representatives to treat serious issues with respect, not contempt.

No, governor, you shouldn’t be anywhere near Richmond or the governor’s mansion.

And again, blackface-wearing disgrace that you are, who the hell are you to tell lawmakers what their job is when you failed to do what was required in your position: resign.
Shut your face and go to bed, would you please. 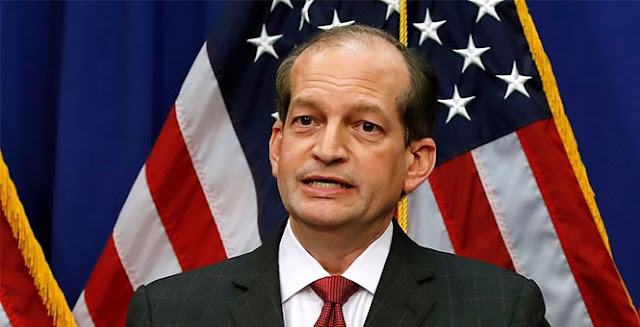 Embattled Labor Secretary Alex Acosta is expected to step down from his position by the end of next week after coming under heavy scrutiny for his handling of a 2008 case against pedophile Jeffery Epstein. At the time, Acosta served as the U.S. Attorney in Florida.

At the White House Friday morning, President Trump said it was Acosta's decision to step aside.

“He's done a fantastic job. He's a friend of everybody in the Administration. And I got a call this morning early form Alex, and I think he did a very good job yesterday under a lot of pressure. He did a fantastic job, and he explained it. He made a deal that people were happy with, and then 12 years later, they're not happy with it. You'll have to figure all of that out but the fact is he has been a fantastic Secretary of Labor," Trump said.

“And Alex called me this morning, and he wanted to see me. And I actually said, ‘well, we have the press right out here, so perhaps you just want to say it to the press.’ But I just want to let you know this was him not me because I’m with him. He was a—he’s a tremendous talent. He's a Hispanic man. He went to Harvard, a great student. And in so many ways I just hate what he’s saying now because we're going to miss him.

“I will say this and I say it again and I say it loud and clear: Alex Acosta was a great Secretary of Labor. What he’s done with plans, and you see the plans coming one after another. You’re just about done with the 401k and that happened," he continued.

"Things that nobody would even think of. So it’s very sad, but at the same time, he wants the focus to be on accomplishments, not on what you’re talking about,” Trump stated.

Standing next to the President, Acosta said, “I do not think it’s right and fair for this administration’s Labor Department to have Epstein as the focus rather than the incredible economy we have today. And so I called the President this morning. I told him that I thought the right thing was to step aside.”

Last week, Jeffrey Epstein was arrested by federal law enforcement authorities and charged with a slew of crimes, including sex trafficking of underage girls.

Epstein was arrested for allegedly sex trafficking dozens of minors in New York and Florida between 2002 and 2005, and will appear in court in New York on Monday, according to three law enforcement sources.

Saturday's arrest by the FBI-NYPD Crimes Against Children Task Force comes about 12 years after the 66-year-old financier essentially got a slap on the wrist for allegedly molesting dozens of underage girls in Florida, the Daily Beast reported over the weekend.

For more than a decade, Epstein’s alleged abuse of minors has been the subject of lawsuits brought by victims, investigations by local and federal authorities, and exposés in the press.

But despite the attention cast on his alleged sex crimes, the hedge-funder has managed to avoid any meaningful jail time, let alone federal charges.

On Wednesday, Acosta held a press conference to explain why he cut a deal with Epstein ten years ago, arguing a trial and harsher charges against him could have resulted in him walking free.

Acosta said: "I absolutely welcome this New York prosecution, it is absolutely the right thing to do. "We believe that we proceeded appropriately, based on the evidence."

"Without the work of our prosecutors, Epstein would have gotten away," Acosta argued. "The Palm Beach attorney's office was ready to let Epstein walk free."

According to Acosta, obtaining a guilty plea deal from Epstein resulted in jail time and a sex offender registration, which was better than losing at trial.

Epstein served 13 months of an 18-month sentence and was allowed to leave jail for work purposes. Despite being standard practice, Epstein's victims weren't notified about the plea deal ahead of time.

Citing a leading prosecutor on the case, Acosta made the argument that the facts at the time could not be proven beyond a reasonable doubt in court due to some victims, young children, refusing to testify and even some witnesses exonerating Epstein.

"There was value in getting a secure guilty plea and to have him register," Acosta said, adding he wanted to help his victims by putting him away. "There is a value to a short guilty plea, because letting him walk...would have been absolutely awful."

Gloves Come Off: Far Left Democrat Insinuates Black And Hispanic Lawmakers Who Side With Pelosi Are Race Traitors 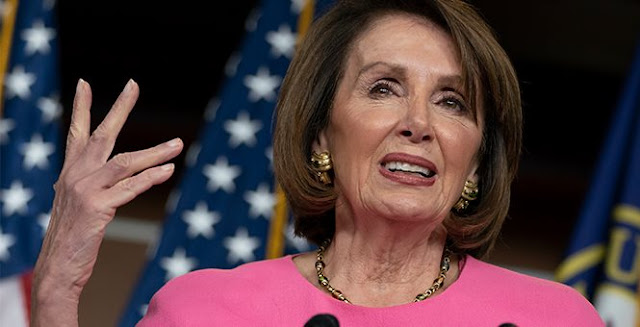 The border crisis appears to have inched the Democratic Party towards another episode of internal strife.

Well, I’m not so sure about that, but it’s been getting pretty nasty.

Trump would never sign it, though he did sign the Senate bill into law, which provided the same funding but without the trash provisions against enforcing the law.

It was also overwhelmingly bipartisan. Moderate House Democrats and Pelosi signed off on the Senate bill, which infuriated the far left.

They’re the face of the growing far-left contingent in the House.

Pelosi has taken swipes at their agenda, which has not been well received.

AOC hasn’t spoken to Pelosi in weeks and this crew dishes it right back.

It reached new heights when AOC pretty much accused Pelosi of racism, saying her criticism in targeting women of color in her caucus was disrespectful.

The claws are out. Grab the popcorn. There is nothing more riveting that Democrats ripping each other apart.