Knitting and fraying in a divided culture 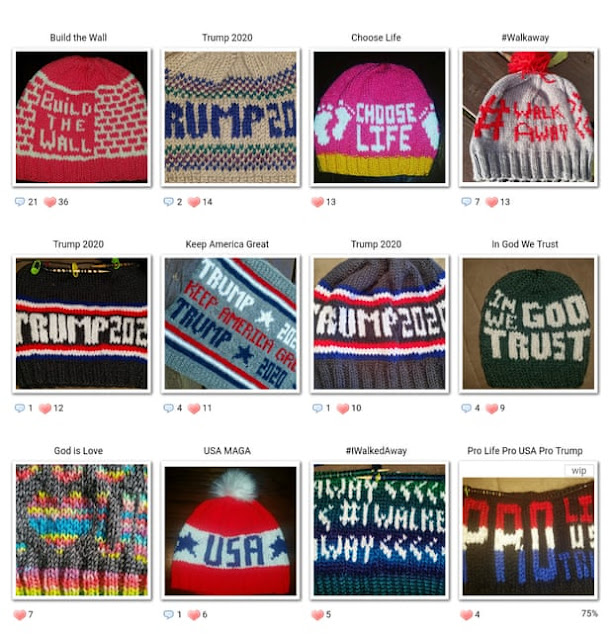 Kay Thompson isn’t pleased about politics entering into every aspect of life.

And she certainly does not agree with shutting down the opinions one disagrees with. So she was put off when Ravelry, the popular knitting website, banned any projects and patterns that showed President Trump in their design, or users who praised him in their personal profiles.

“To me, to exclude a whole group of people because you don't agree with their political views seems like you’re kind of practicing exactly what you are claiming you are against,” Thompson said from her knitting shop on East State St. in the charming business district of this town of 12,000.

Thompson’s shop is a kaleidoscope of color, with stacks of vibrant skeins of yarn enticing even the non-knitter to want to join in the craft. There are also shelves of books filled with patterns and ideas and racks of needles to choose from. At the very center is a long wooden table for knitters to sit across from each other and form friendships.

Thompson took up knitting at age 10, under the tutelage of her grandmother. She was no expert back then. “I’d start with 20 stitches and end up with 40. She'd say, ‘How do you do that?’”

What she liked most about knitting was the way communities formed because of the craft. When she and her husband moved here 21 years ago, she decided to open a yarn shop.

“When we opened the shop, we were about the only shop in 90 miles. Now there's several in the area. I guess what I've enjoyed the most is finding or watching friendships happen between the knitters.” She tells of women who first met at the shop, and through knitting “became joined at the hip.” The circle of knitters has “helped several people through cancer, through deaths of loved ones. It becomes a support system.”

“Knitting is a place, an experience you enjoy outside of the political arena. Telling people who hold different political views than you do that they are not welcome at the table places those people outside of a community,” said Sue Maraffa, a regular at the Knit Wit Knits shop table.

Good things do not happen in society, Maraffa said, when you start excluding people for holding different views, “which is exactly what Ravelry has done to conservative knitters. I mean, if you want to post a pattern that is political, I mean, that has a political message on it, fine and well. People want it or they don't want it; they shouldn’t be cut off,” she said.

This trend of intolerant political wokeness is disturbing to both Thompson and Maraffa, who said they don’t see an end to it.

Maraffa is clear that she is not a Trump supporter. The only Republican she has ever supported in recent memory was John Kasich in 2016, when he defeated Trump in the Ohio primary.

But almost nobody is safe from the woke censorship campaign. Nike recently decided the Betsy Ross flag was too offensive.

If you think that you won’t be “canceled,” you haven’t been paying attention to the recent behavior of the major media and the biggest corporations.

This is not about a knitting website or a pair of shoes. It is about how these platforms, which should bring us together like the table in Thompson’s shop, can end up dividing us.

https://www.washingtonexaminer.com/opinion/op-eds/knitting-and-fraying-in-a-divided-culture
Posted by Frances Rice at 11:43 AM