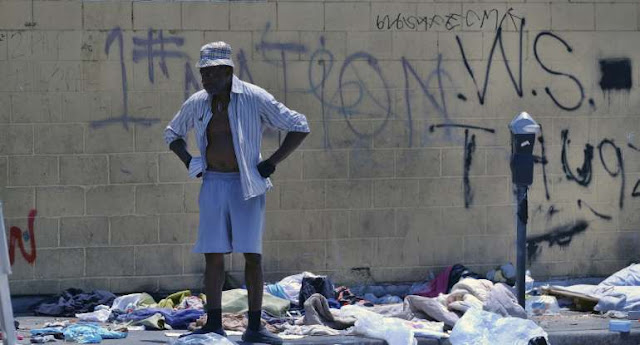 A homeless man stands amongst a trash lined street in downtown Los Angeles on Thursday, May 30, 2019. (AP Photo/Richard Vogel)

In your typical Third-World megalopolis, basic city functions fall into disrepair, while once-eradicated diseases run rampant -- and the local bigwig boasts about saving the world.

Los Angeles is quickly becoming a typical Third-World megalopolis, and the rest of the state isn't far behind.

Yesterday the New York Post reported "rats running everywhere among piles of decaying garbage," in a "sprawling 50-block area that is believed to be the base for around 4,200 homeless people."

Local columnist Steve Lopez called his city a "giant trash receptacle" and asked, "Did someone turn back the calendar a few hundred years?” No, Steve, the city government turned hard left is all. Although debate fans might note that that's a distinction without a difference.

So where did all that trash come from?

Los Angelenos are dumping it out in the streets -- and the city isn't collecting it.

Two weeks ago Fox News reported that the problem goes back at least to last October, when the city noticed nine cases of typhus. The city "cleaned up some of the worst piles of garbage," but then they slacked right back off. The huge pile returned quickly, but officials at first said that it "could take up to 90 days before it's cleaned up."

The same local news report described it this way:

Even the city's most notorious trash pile, located between downtown LA's busy Fashion and Produce districts, continues to be a magnet for rats after it was cleaned up months ago. The rodents can carry typhus-infected fleas, which can spread the disease to humans through bacteria rubbed into the eyes or cuts and scrapes on the skin, resulting in severe flu-like symptoms.

The story also noted that an "out-of-control rat population can even lead to the spread of dangerous strains of salmonella and bubonic plague."

City services are so strained that it now appears to be playing whack-a-mole with garbage dumpers. As I began writing this piece, a new Fox News report popped up in my MSN feed, complete with video you might not want to watch during lunch.

Statewide, California's problems aren't limited to trash dumpers, the homeless, rat infestations, and infectious disease... as if that weren't already too much Third World fun in the once-Golden State.

Stories about San Francisco's Human Poop Hurdle Olympics are now de rigueur, and you'd better watch where you stick the landing or a used syringe might stick you.
…

Blackouts, typhus, poop, an army of homeless, wildfires, contaminated syringes, garbage, rats, fleas, and Progressive government -- these are the Plagues of California. I'd ask the last person to leave California to please turn off the lights, but they'll have gone dark long ago.

https://pjmedia.com/vodkapundit/ten-plagues-of-california-are-turning-the-golden-state-into-a-third-world-hell-hole/
Posted by Frances Rice at 10:51 AM