Chickens Come Home to Roost on Dems' Accusations of Racism 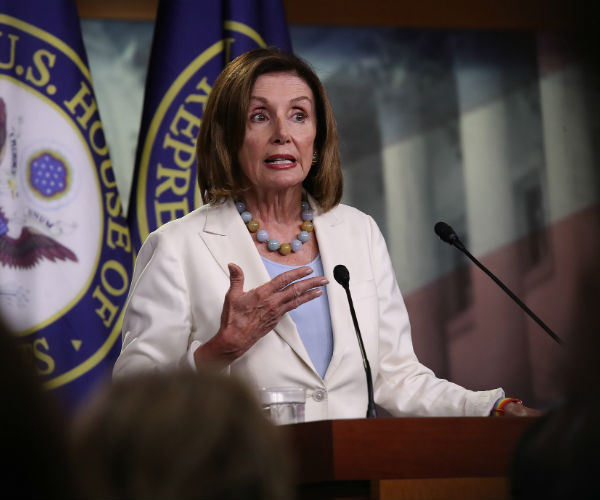 Speaker of the House Nancy Pelosi (D-CA) answers questions during a press conference at the U.S. Capitol on July 17, 2019, in Washington, D.C.
(Win McNamee/Getty Images)

House Speaker Nancy Pelosi, D-Ca., and House Democrats really have some nerve calling President Trump’s tweets “racist” when she, Democrats, and their media friends have made race baiting an art form.

Democrats have been using race and calling or implying that Republicans and conservatives are racists so long that they have pretty much made the word “racist” an almost meaningless cliché giving real racists cover.

Race baiting and racist comments are no stranger to Pelosi and her Democrat water carriers. As I have written in this space, President Barack Obama and his first Attorney General, Eric Holder, elevated identity politics and race baiting to new levels with no complaints from fellow Democrats or the media.

Former Vice President Joe Biden in 2012 told a diverse group including many blacks that Mitt Romney and Republicans would “put y’all back in chains.”

Pelosi is a master at playing the race card!

On the citizenship question on the census she said that it was an effort to “Make America White Again."

Democrat race-baiting against Republicans had been consistent for at least two decades — until presidential hopeful Sen. Kamala Harris, D-Ca., made a not-so-subtle accusation of racism against fellow Democrat Biden on his association with southern segregationists and opposition to busing.

That was not the only racist “chicken coming home to roost” in the Democrats’ “chicken coop” of racial hypocrisy.

Another one laying racist eggs in the Democrat nest was Alexandra Ocasio-Cortez, D-N.Y. She accused Pelosi of “explicit singling out of newly elected women of color” for criticism of their tactics.

Guess who came to Pelosi’s defense? President Trump, who said that she “was not a racist.”

So how did Pelosi return the favor?

The entire uproar and cries of racism over the Trump tweet represent an America where progressives, Democrats, and the media — all birds of a feather flocking together — consider any criticism of policies or people they support to be racist:

Regardless of his tweets, the president is doing something that most conservatives and Republicans are either afraid or unwilling to do — fight back and give progressives a taste of their own medicine!

In many cases, when accused of being racist, most Republicans fold like wet spaghetti and run like a dog with its tail between its legs looking for the nearest reporter to show they are really not bigots.

Regardless of his terminology, the president is telling progressives and his media enemies that he will not turn the other cheek.

It’s too bad those so anxious to call Trump a racist over tweets don’t get just as upset and remain silent when an antifa terrorist group allegedly tries to attack an Immigration and Customs Enforcement (ICE) detention facility in Tacoma, Washington; or, when ICE protesters pull down an American flag, raise a Mexican flag and vandalize a Blue Lives Matter banner at an ICE detention facility in Aurora, Colorado.

Some will argue that the reason they are silent is that they sympathize with the perpetrators — not the men and women of ICE and law enforcement.

Clarence V. McKee is president of McKee Communications, Inc., a government, political, and media relations consulting firm in Florida. He held several positions in the Reagan administration as well as in the Reagan presidential campaigns. He is a former co-owner of WTVT-TV in Tampa and former president of the Florida Association of Broadcasters. Read more of his reports.