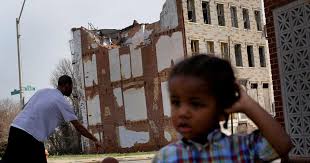 Hoping to reach African-American voters nationally in his bid for the Democratic presidential nomination, Sen. Bernie Sanders on Tuesday toured the West Baltimore neighborhood where Freddie Gray was arrested — and likened the poverty he observed to that of the Third World.

The independent senator, who describes himself as a democratic socialist, walked the streets of Sandtown-Winchester for about 20 minutes, joined by community leaders and a swarm of cameras that mostly blocked his view of boarded row homes and crumbling marble steps. A handful of residents joined the spectacle, and occasionally broke out in chants of Gray's name. 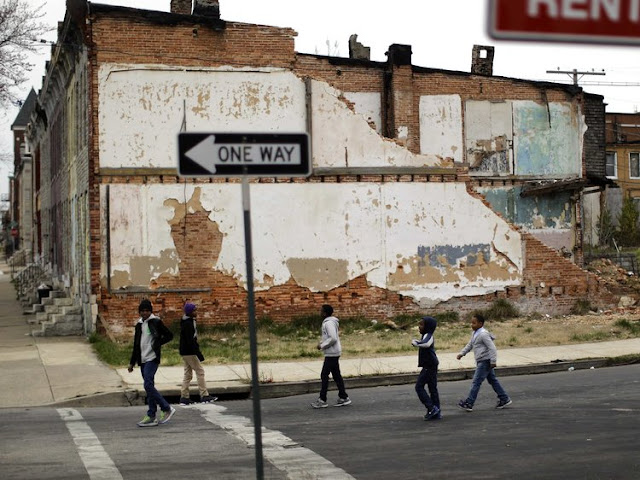 The scene provided dramatic visuals of the economic inequality Sanders has made the center of his campaign, offering a new backdrop from which to argue for a higher minimum wage, tuition-free public college and tougher federal regulations of the nation's banking sector.

"Anyone who took the walk that we took around this neighborhood would not think you're in a wealthy nation," Sanders told reporters later at the Freddie Gray Empowerment Center in Bolton Hill. "You would think that you were in a Third World country."

But Sanders' anti-poverty message was largely overshadowed by his reluctance to discuss the subject on which politicians, the news media and the public have focused in recent days: terrorism and the self-declared Islamic State.

Before the news conference began, a campaign spokeswoman tried to wave reporters off asking Sanders about ISIS, arguing it was off-topic.

When a reporter ignored the request, Sanders appeared agitated.

"What about ISIS, guys?" Sanders said. "Of course I'll talk about ISIS."

Sanders then shifted back almost immediately to domestic policy.

Then he ended the news conference.

Gray, 25, died in April after suffering a severe spinal cord injury in police custody. The protests that followed drew international attention. On the day he was buried, the city erupted in arson, looting and riots.

As Sanders toured West Baltimore, the trial of the first of six police officers charged in Gray's death entered its seventh day in a downtown courtroom.

Before Sanders arrived in Bolton Hill, a campaign aide asked a group of about a dozen supporters not to cheer him.

The group, which included a woman who held a large banner that read "Bernie Sanders for President," obliged; as a result, his arrival was more somber than a typical campaign appearance.

Sanders began the tour at the CVS at North and Pennsylvania avenues that burned during the riots. He walked to the corner of Presbury and North Mount streets, near where Gray was arrested, and looked up at a large mural of Gray.

Sanders then met with prominent faith leaders in Bolton Hill.

Residents yelled as Sanders passed by, and some joined the media throng. One shouted "He's the only candidate without a super PAC!" — repeating a point Sanders has often made.

"We don't want Trump," shouted another.

Some held signs pointing to long-standing complaints with the city's public housing: "We deserve safe and livable housing."

"I'm impressed," said Michael Williams, a West Baltimore man who described himself as a Hillary Clinton fan. "There has never been a person running for president to come to our neighborhood."

Former Gov. Martin O'Malley, who is also seeking the Democratic nomination, visited West Baltimore after the riots in late April, but he had not announced his candidacy at that time.

The unrest in Baltimore has pushed its way into the presidential campaign, where Clinton has faced questions about the tough-on-crime policies popular during President Bill Clinton's administration in the 1990s, and O'Malley has been asked about mass arrests during his tenure as mayor of Baltimore.

Sanders, whose home state of Vermont is 95 percent white, has been reaching out to African-American leaders and activists since members of the Black Lives Matter movement interrupted a speech he was giving in Phoenix in July.

Sanders met with faith leaders including the Rev. Jamal H. Bryant of the Empowerment Temple in Northwest Baltimore. The group discussed criminal justice reform, education and the lack of services found in many urban neighborhoods.

"It is very expensive to be poor," Sanders told the pastors. "I didn't see a decent grocery store around here. So what are moms feeding their kids?"
Sanders also fielded several questions about interactions with policy and recidivism.

One pastor, in discussing the militarization of police, said that his daughter was afraid of law enforcement: "She's freaking out."

Bryant stressed that the meeting with leaders did not constitute an endorsement of his candidacy. He said he hoped to meet with other candidates.

"It was so important for us that the senator did not just hear statistics and testimony without seeing the face of a community that is in urgent need of assistance," Bryant said. "This is not just a Baltimore problem, it is a black America problem."

Longtime civil rights leader Marvin L. "Doc" Cheatham said that the event's organizers and other leaders made a mistake in not focusing more attention on neighborhoods west of Fulton Avenue, where Gray attended school and where the riots also shuttered businesses.

"We're just demanding that they consider all the communities," Cheatham said. "You need to come west to understand what happened." 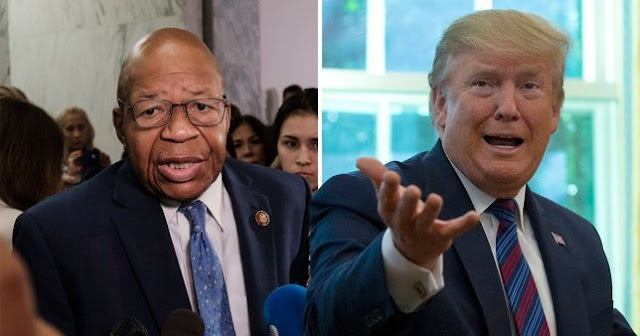 After President Donald Trump attacked U.S. Rep. Elijah Cummings of Maryland on Saturday as a “brutal bully” and called his 7th District “disgusting, rat and rodent infested," officials, residents and political commentators jumped to the defense of the congressman and his Baltimore home.

Some went so far as to call Trump’s tweets racist as the president again took to Twitter to vilify his political enemies, using inflammatory language that some believe stokes the nation’s racial divisions as he prepares to run for reelection in 2020.

“Elijah Cummings grew up facing racist bullies like Trump and learned to confront them with qualities unknown to Trump: courage and integrity. The great people of Baltimore have something Trump craves but will never have as he degrades the Office of the President: dignity,” U.S. Sen. Chris Van Hollen of Maryland tweeted.

Trump’s detractors flooded Twitter to support the city and Cummings. The topic “#WeAreBaltimore” was trending at No. 1 on Twitter with more than 14,000 tweets by Saturday evening. House Speaker Nancy Pelosi of California tweeted that Cummings is “a champion in the Congress and the country for civil rights and economic justice." Pelosi, a Baltimore native, also stressed that “we all reject racist attacks against him and support his steadfast leadership.”

It started as many Trump Saturday morning Twitter attacks do as the president watched a “Fox & Friends” segment in which a Republican strategist called Cummings’ district the “most dangerous” in America and showed video of boarded-up rowhouses and trash-strewn alleys in West Baltimore.

The report followed a July 18 congressional hearing before the House Oversight and Government Reform Committee that Cummings chairs looking at conditions at facilities holding children suspected of crossing the border illegally. Cummings lashed out during the hearing at Kevin McAleenan, head of the Department of Homeland Security, for what he described as conditions in which children were left to defecate on themselves and did not have access to a shower.

CLICK HERE TO READ THE REST OF THIS FAUX OUTRAGE ARTICLE.