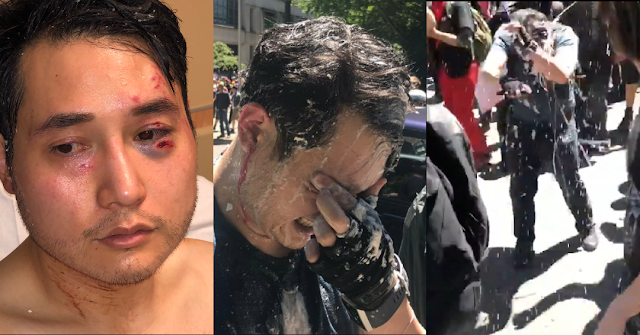 Andy Ngo published the below commentary and video titled “Antifa Is Creating ‘No-Go Zones’ in US Cities” on May 12, 2019 on his YouTube channel:

On 11 May, 2019, Andy Ngo was interviewed on Sky News Australia about the on-going harassment and assault campaign against him by Portland Antifa for his journalism critical of the extremist group.

This is video from a new angle of the brutal assault on journalist Andy Ngo in Portland, Oregon on June 29, 2019 as police did nothing. It shows the exact moment when an Antifa thug robbed Andy of his GoPro camera and equipment, as well as another Antifa criminal punching Andy in the face with appear to be weighted Oakley assault gloves and frontal views of the Antifa thug who kicked Andy in the groin.

See this thread for full accounting of 12 Antifa assailants.

The recent attack against Andy proves he is correct. Antifa is a group that holds the City of Portland hostage. Portland is an Antifa no-go zone.

Slate’s Islamic apologist Aymann Ismail on Antifa attack on Andy Ngo: “This is bad, but he’s guilty of worse”