Harvey Weinstein's Hollywood career is over. The fallout from his scandal? That's just begun.
Every day we learn new, more shocking, revelations about the Harvey Weinstein scandal.
Here’s just two from the last 24 hours:
The film titan and famed Democratic bundler is no longer head of his own movie studio. And his list of alleged crimes is growing. So, too, is the stain the scandal is leaving on not just his fallen empire. Much of Hollywood is either complicit in his behavior or far too eager to sweep it under the cultural rug.
Are they afraid to attack a progressive kingpin? Or are other forces at play?
They Knew. They All Knew. 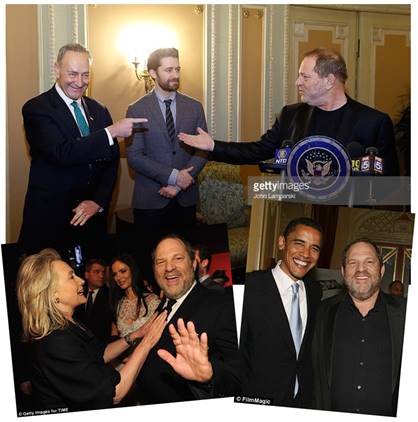 Hollywood will not easily recover from Harvey Weinstein -- not for a long time.  The hypocrisy level has hit Defcon 1, or 9.9 on the Richter scale.
Hollywood’s politics have always been a self-serving charade, a liberal masquerade for a rapacious and lubricious lifestyle.  But now, thanks to the Weinstein scandal, we see it more clearly than ever. And it couldn't be more repellent. (I had always thought Bill Clinton would have made the greatest studio executive of all time. Now I'm convinced of it.)
If conservative investors had any courage, this would be the time to make a hostile takeover of the movie business.  Unfortunately, they don’t.  I know this from bitter personal experience. Wealthy conservatives are delighted to support the Philharmonic, but when it comes to popular culture they turn away, as if afraid to get their hands dirty.
That this is a huge mistake should be obvious.  They have abandoned the culture -- and our children -- to the creepiest people imaginable.  What is going on in Hollywood is far from being just about Harvey. It’s approaching a pandemic. So many previously silent assaulted or raped women are coming out of the woodwork, it seems like a long-belated remake of “Cheaper by the Dozen.” No one knows who will be next or if it will stop at Harvey.
The rot is everywhere, even, perhaps especially, in the precincts of “high art.” Gwyneth Paltrow says now is the time to put an end to these attacks on women. But where was she years ago when Harvey got “handsy” with her? Looking the other way while earning millions and garnering Oscars.
Meryl Streep claimed she was clueless about Weinstein’s repulsive antics. Time to award her her greatest Oscar yet -- for playing someone deaf, dumb, and blind while living as a troglodyte in the Gobi desert.  Either the woman’s a liar or an utter nincompoop.  I’ll go with the former.
As for the great feminist George Clooney -- the first male star out of the box to condemn Weinstein’s behavior -- let’s give him the Nobel Prize in virtue signaling. By coming forward, he was able to ace out his competition -- Howard Zinn-loving Matt Damon, who disgraced himself forever by covering up for Harvey a decade ago. (For those  who may have missed it in the onslaught of sleazy details, Damon assured then New York Times reporter Sharon Waxman that Miramax’s high-paid Italian representative was a genuine “creative film executive” and not Harvey’s European procurer, as was, evidently correctly, rumored.
Damon is the same “progressive” movie star who makes films opposing school choice for the masses while living in a thirty million dollar house and sending his kids to private school. I take it back -- maybe we should give him the Nobel in virtue signaling.)
What does this all mean?
Hollywood is worse than you thought it was, even than I thought it was.  And I worked there for years, observing things close up.
These people -- led by Weinstein as the local Henry VIII, now decamped for Europe for an Anthony Weiner-style rehab -- have solidified themselves as some of the biggest hypocritical fakes in recorded history, deceiving themselves even more, if that’s possible, than they deceive the rest of us.
Can you imagine how it’s going to be watching this year’s Oscars as they coop up awards while making political pronouncements on whatever cause strikes their superficially conventional (but personally sick) fancies, especially if those causes express veiled contempt for the morals of those clods in flyover country who are supposed to be their audience?
Speaking as a member of the Academy since the 1980s, I won’t be watching. It’s over for me, especially since Joan Rivers is no longer with us to lend a certain amused cynicism to the vulgar orgy of self-congratulation. And I suspect I won’t be alone.  Hollywood has become the new NFL.  People will soon be turning it off.
Back in the old days of the studio system, the moguls forbid movie stars contractually from voicing their political opinions in public.  At the same time, ironically, the movies were better, more likely to be classics and to have a positive impact on the world at large.  Have you seen the likes of Casablanca and Mr. Smith Goes to Washington lately? Maybe it’s time to go back to the past to get real progress.
Hello, conservative investors!  Can you hear me?
PJ Media co-founder Roger L. Simon is an Academy Award-nominated screenwriter who has not decided whether he will bother to vote in the Oscar this year.  He is leaning no.


https://pjmedia.com/rogerlsimon/2017/10/10/harvey-weinstein-destroyed-hollywood-now/
Posted by Frances Rice at 11:28 AM