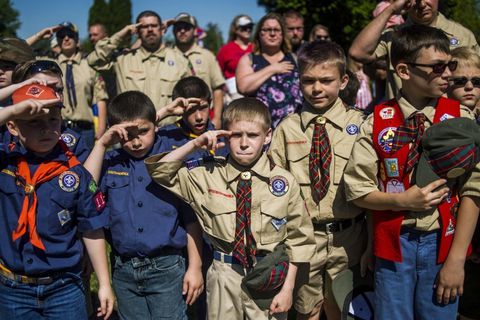 Liberals have waged a decades-long war on boys and men in this country, with the latest assault being accusing men of “toxic masculinity” as described in the article, “Houston Rescuers Prove the Lie of ‘Toxic Masculinity.’ “
The announcement that the Boy Scouts of America has caved to the demands of radical feminists and will now admit girls is the latest liberal termite that’s now eating away at our nation’s cultural foundation.
It won’t be long before the Boy Scouts of America will become female-centric, like our colleges and universities. Young boys will be infused with self-hatred and indoctrinated to believe the nonsense being spewed out by liberals as pointed out in the above article: “If we are ever to create a nonviolent, truly gender-equal world, we must rip away the false, culturally constructed façade of masculinity”.
This is not going to end well.
_________________


Boy Scouts to accept girls? Thanks but no thanks, respond many involved in Girl Scouts
By Eseosa Olumhense and Kate Thayer 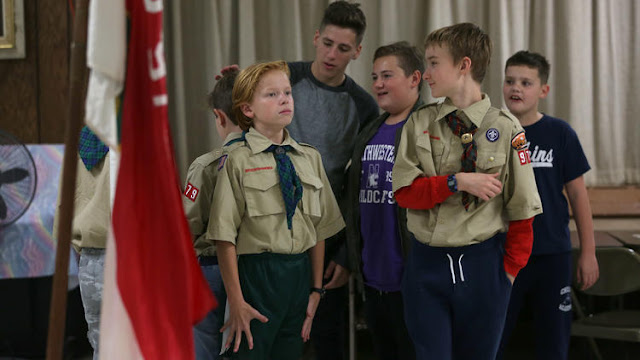 The members of Maureen Riordan’s Girl Scout troop have experienced everything from rafting Colorado waters and zip-lining to computer coding, career planning and pottery.


So the Lincoln Park mother says she was confused and disappointed when the Boy Scouts of America announced days ago that it will begin to admit girls next year in an effort to provide its benefits to both genders.
“What I’m hearing is girls don’t get the same opportunities,” said Riordan, who leads both her 12- and 9-year-old daughters’ troops and was herself a Girl Scout. “I couldn’t disagree more.”
With news of the Boy Scouts’ policy shift, national and regional Girl Scouts officials, as well as some of the local families they serve, have criticized the move, saying the Girl Scouts already offer a full range of activities to girls and do so in an empowering, confidence-boosting setting.
“We have research that shows girls really do thrive in an all-girl environment,” said L’Oreal Payton, spokeswoman for the Girl Scouts of Greater Chicago and Northwest Indiana. “It’s a safe space for a girl to be a girl.”
Other critics of the change say they simply want the Boy Scouts to remain only for boys.
The latest shift has created strife between the two scouting organizations, with Girl Scouts officials claiming the Boy Scouts are making the change as a revenue grab, possibly because of dwindling enrollment and financial woes from payouts over sex abuse claims.
Boy Scouts officials say the shift is not financially motivated but rather a response to requests from parents. The move is the latest in a number of changes for the group in the past several years, including allowing in gay members and volunteers.
“This is not about a decline in membership,” said Kate Jacobs, spokeswoman for the Pathway to Adventure Council, which oversees Boy Scouts activities in the Chicago area and northwest Indiana. The council is the largest in the state and growing, she said, with nearly 24,000 youth members.
Girls have already been part of the Boy Scouts through coed activities offered since 1971, the organization said. Given this history, opening membership to girls formally was a “natural next step,” Jacobs said.
Some local families connected to scouting are wary.
“I understand what the Boy Scouts are trying to do,” said Wendy Lundgren, a Girl Scout troop leader from Chicago’s Old Irving Park neighborhood. “But if there is something lacking in the Girl Scout program, they need to work on enhancing that. It’s very condescending for the Boy Scouts to say ‘Hey, we’re better, join us.’ ”
Lundgren has a daughter in Girl Scouts and two sons who are Boy Scouts. At a scout meeting in a Jefferson Park church Thursday evening, she and others raised concerns that the move would change both programs, to the detriment of participants.
Among those displeased with the announcement was 99-year-old Boy Scout volunteer Russ Gremel.
“Believe me when I tell you, it would be horrible,” Gremel said. “Men and women are equal, but not the same.”
Gremel is something of a legendary figure in local scouting circles, having served more than 60 years as scoutmaster for Troop 979 , for which he still volunteers.
Gremel said it’s “hard enough” to plan events just for boys, and adding girls to activities and outings would complicate things for scoutmasters and other volunteers.
“If they allow girls in this group, I will drop out of Scouts completely,” Gremel said.
In fact, Boy Scouts officials said troops will remain single-gender. According to the announced plans, starting next year Cub Scout packs for ages 7 to 10 can be all-boys or all-girls, with the option of a coed pack with girls and boys dens.
A new program for girls aged 11 to 17, which will use the same curriculum as Boy Scouts and allow girls to earn the top rank of Eagle Scout, is expected to be in place around 2019.
But some confusion has arisen because the announcement is so fresh, some Cub Scout and Boy Scout leaders at Thursday’s meeting said. One assistant scoutmaster said he only learned of the plan through the news. Without knowing exactly how it would be implemented, or how their roles might change, many felt the development could overwhelm program volunteers.
The Girl Scouts of Greater Chicago and Northwest Indiana boasts nearly 53,000 youth members this year, though the chapter has seen a decline from more than 69,000 girls enrolled in 2013, a trend Payton said has been seen across most youth service organizations in recent years. Nationally, both the Boy Scouts and Girl Scouts have reported declines over the past year.
Riordan, the troop leader from Lincoln Park, said she hasn’t heard of any Girl Scouts wanting to switch over to the Boy Scouts program, but wondered if some families might do so for convenience if they have both a son and a daughter interested in scouting.
Rosa Garcia, another Chicago Girl Scout parent, said she’s not convinced the new Boy Scouts girl track would have provided her daughter with the same experience.
“If she did (scouts) with boys, would she have had the same voice in that setting? It’s nice it’s focused on girls — allowing girls to be girls without having to compete with boys,” she said.
Garcia’s daughter, Allyson Rodriguez, 15, said she’s participated in robotics events, done community service work and learned about engineering careers during her 10 years as a Girl Scout.
“It’s a nice gesture,” Rodriguez said of the Boy Scouts welcoming girls, “but I feel like there’s already opportunities for girls.”
At the Jefferson Park scout meeting, some of the younger people present seemed to embrace the change.
“When do the girls get here?” one Boy Scout was heard saying at the start of the meeting.
Annali Martinez, 8, of Albany Park, said the announcement meant her “dream has come true.” Annali has been informally joining her brother Jayden, 9, at his Cub Scout meetings for about a year after leaving a Girl Scout troop, their mother said. The Boy Scouts’ activities were more appealing, more adventurous, Annali said. Among her favorite things: arts, crafts and playing dodgeball.
“And being included,” her brother added. 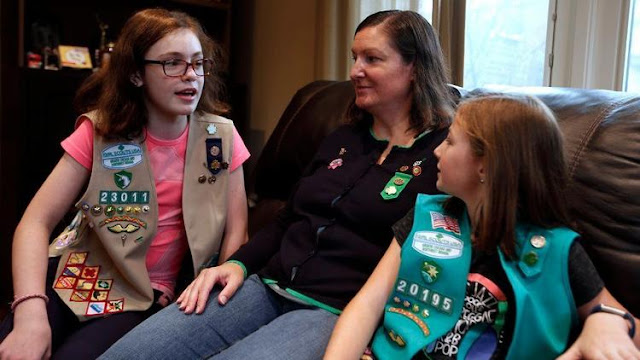