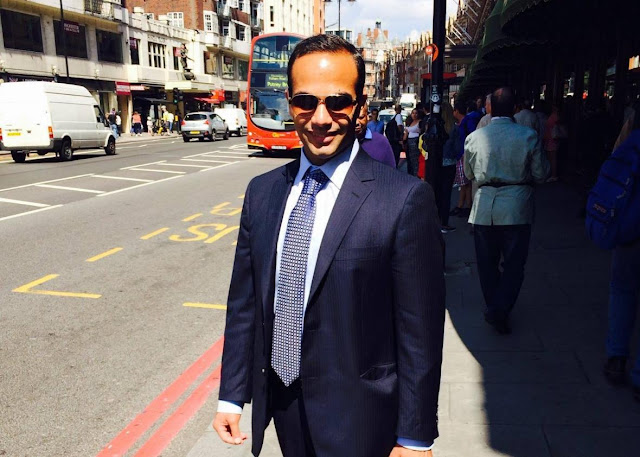 
With news of yesterday’s indictments of Paul Manafort and his colleague came word that former (minor) Trump campaign adviser George Papadopoulos pleaded guilty earlier this month to making false statements to investigators. In addition, we learned that Papadopoulos has been cooperating with the Mueller investigation.
Papadopoulos was in the news back in August, when the Washington Post reported that during the presidential campaign he sent emails to the Trump campaign urging that the candidate meet with top Russian leaders including Putin, but that the campaign repeatedly rejected this suggestion. The report said the emails were “read to The Post by a person with access to them.”
I discussed this story here. I maintained, as I have elsewhere, that even if the Trump campaign had been eager to obtain dirt on Hillary Clinton from Russians with Kremlin ties, that would not be criminal in itself. I’ve never been convinced that it would even be problematic.
Papadopoulos’ plea (a stipulation of agreed upon facts) can be found here. As I read the document, it is consistent with the Post’s report that, while working for Trump’s campaign, Papadopoulos tried to arrange a meeting between the campaign and Russian government officials. It is not inconsistent with the Post’s report, apparently backed up by emails, that the campaign rejected the idea of having such a meeting.
Here are key passages from the plea:
a. Defendant PAPADOPOULOS claimed that his interactions with an overseas professor, who [he] understood to have substantial connections to Russian government officials, occurred before [he] became a foreign policy advisor to the Campaign. Defendant PAPADOPOULOS acknowledged that the professor had told him about the Russians possessing “dirt” on then-candidate Hillary Clinton in the form of “thousands of emails,” but stated multiple times that he learned that information prior to joining the campaign.
In truth and in fact, however, defendant PAPADOPOULOS learned he would be an advisor to the Campaign in early March, and met the professor on or about March 14, 2016; the professor only took interest in [him]
because of his status with the Campaign; and the professor told [him] about the “thousands of emails” on or about April 26, 2016, when [he] had been a foreign policy adviser to the Campaign for over a month.
b. Defendant PAPADOPOULOS further told the investigating agents that the professor was “a nothing” and “just a guy talk[ing] up connections or something.” In truth and in fact, however, [he] understood that the professor had substantial connections to Russian government officials (and had met with some of those officials in Moscow immediately prior to telling [him] about the “thousands of emails”) and, over a period of months, [he] repeatedly sought to use the professor’s Russian connections in an effort to arrange a meeting between the Campaign and Russian government officials.
c. Defendant PAPADOPOULOS claimed he met a certain female Russian national before he joined the Campaign and that their communications consisted of emails such as, “Hi, how are you?” In truth and in fact, however, [he] met the female Russian national on or about March 24, 2016, after he had become an adviser to the Campaign; he believed that she had connections to Russian government officials; and he sought to use her Russian connections over a period of months in an effort to arrange a meeting between the Campaign and Russian government officials.
Note that Papadopoulos pleaded guilty to making false statements, not to trying to arrange a meeting with Russian government officials. The latter is not, to my knowledge, a crime. A meeting between the campaign and Russian government officials might have resulted in a crime, depending on what transpired. However, there has been no indication so far that such a meeting occurred.
The intriguing part of yesterday’s Papadopoulos story is news that he is cooperating with Mueller’s investigation. What has the cooperation consisted of? Providing the investigators with emails, such as the ones that, somewhat mysteriously, were read to the Washington Post? Providing evidence that, contrary to what the Post reported, there were meetings between the campaign and Russians?
More intriguingly, did Papadopoulos wear a wire for Mueller in an effort to ensnare Trump campaign officials? Allahpundit speculates about this possibility.
At a minimum, the Papadopoulos plea sends the strong message that other witnesses in this matter need to tell the truth to Mueller’s team. It’s not a lesson that should have required reinforcement, especially given the prosecution of Scooter Libby. But there it is.
http://www.powerlineblog.com/archives/2017/10/the-papadopoulos-plea.php
Posted by Frances Rice at 9:33 AM