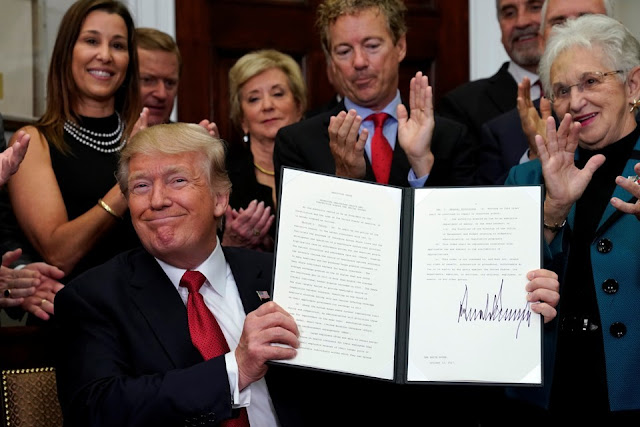 They were never lawful because Congress never appropriated the money.


It’s a sad sign of our times that the constitutionality of any given government action is now seen as a wholly secondary consideration, subordinate to politics and arguments about politics. And so it is with Donald Trump’s necessary decision to halt federal payments of cost-sharing subsidies to insurance companies.
For example, here’s how the Washington Post led off its coverage of Trump’s decision: “President Trump is throwing a bomb into the insurance marketplaces created under the Affordable Care Act, choosing to end critical payments to health insurers that help millions of lower-income Americans afford coverage.”
The New York Times headlined its article with the declaration “Trump to scrap critical health care subsidies, hitting Obamacare again.” But that’s not exactly right. In reality, the Constitution scraps Obama’s subsidies. They were never lawful because Congress never appropriated the money. Here’s the legal background.

Section 1402 of Obamacare requires insurance companies to reduce deductibles, copayments, and other similar payments for lower-income consumers and then says that the federal government will reimburse the insurers for their losses. Specifically, insurers will notify the federal government of the amount of their price reductions, and the government will “make periodic and timely payments to the insurer equal to the value of the reductions.”
Clear enough? There was just one problem. Unlike other provisions of Obamacare covering other forms of subsidies (for example, Section 1401, which funded subsidies that helped cover insurance premiums), the law didn’t specifically appropriate any money to fund these payments.
This isn’t a small thing. In fact, it implicates the core constitutional structure of our government. Article I, Section 9, of the Constitution unambiguously declares that “no Money shall be drawn from the Treasury, but in Consequence of Appropriations made by law.” The most relevant federal appropriations statute states quite clearly that “a law may be construed to make an appropriation out of the Treasury . . . only if the law specifically states that an appropriation is made.”
In fact, there is unmistakeable evidence that President Obama knew that his administration needed a specific appropriation to fund Section 1402 subsidies — he asked Congress for the money. Congress said no. It didn’t appropriate a single dime. So Obama did what he did best: He “penned and phoned” the subsidies into existence. He directly violated the Constitution by spending the money anyway.
The House of Representatives sued, and on May 12, 2016, federal district court judge Rosemary Collyer ruled in the House’s favor and held that the Obama administration’s payments were unlawful. Her opinion reads like a 38-page civics lesson, but for all its length the court’s core holding is simple: “The Affordable Care Act unambiguously appropriates money for Section 1401 premium tax credits but not for Section 1402 reimbursements to insurers. Such an appropriation cannot be inferred.”
The Obama administration argued that blocking the payments would lead to “absurd economic, fiscal, and healthcare-policy results.” The judge’s response was constitutionally and legally sound:
The only result of the ACA, however, is that the Section 1402 reimbursements must be funded annually. Far from absurd, that is a perfectly valid means of appropriation. The results predicted by the [administration] flow not from the ACA, but from Congress’ subsequent refusal to appropriate money.
In other words, if you have a problem with the lack of appropriation, take it up with the House and Senate.
Technocrats of all ideological stripes consistently find the Constitution frustrating. If it weren’t for that pesky document, our benevolent dictators could all pen and phone their way to utopia. But there are good reasons for leaving appropriations to Congress. As Josh Blackman reminded us in an outstanding and comprehensive piece in National Review Online last year, James Madison wrote in Federalist 58 that “this power over the purse may, in fact, be regarded as the most complete and effectual weapon with which any constitution can arm the immediate representatives of the people.”
Every two years we elect the entire House and one-third of the Senate. There is thus a constant potential check on government expenditures. The fact that Congress rarely checks that spending makes its power no less legally real nor any less constitutionally necessary. And, by the way, judges do not exist to correct subjectively determined deficiencies in the elected branches’ policy-making.
While there are many reasons to complain about the Trump administration’s approach to the Constitution, his decision to end illegal subsidies is exactly right. If defenders of Obamacare want to blame anyone, they can blame their own side. When Democrats controlled the government and could fashion the law how they liked, they provided for annual appropriations. That was their decision. If they want to “fix” that law now, they can either make a deal or win elections. Continuing to violate the Constitution, however, is not a viable choice.
http://www.nationalreview.com/article/452660/obamacare-subsidy-payments%3A-trump-illegal-subsidies
______________________ 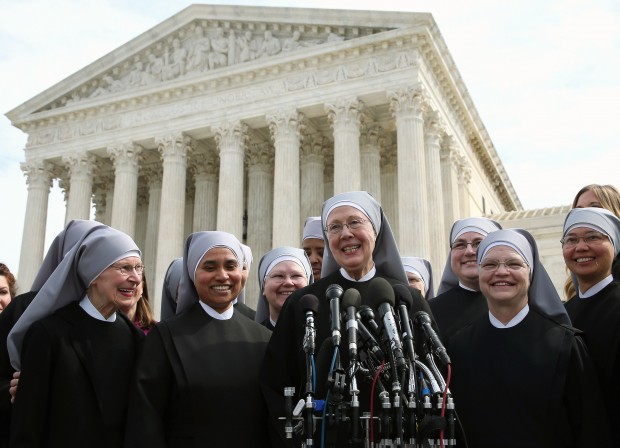 Little Sisters of the Poor sued the Obama administration and went to the Supreme Court.

The Trump administration has rolled back another Obama-era regulation. No longer will employers be forced to provide contraception coverage under their health plans, freeing them from violating their religious consciences. The Department of Health and Human Services issued the new rules Friday.


The rules would let a broad range of employers -- including nonprofits, private firms and publicly traded companies -- stop offering free contraceptives through their health insurance plans if they have a "sincerely held religious or moral objection," senior agency officials said on a call about the implementation and enforcement of the new rules.
This could apply to the roughly 200 entities that have participated in about 50 lawsuits over birth control coverage, according to the agency, which said that "99.9% of women" who currently receive birth control through the contraceptive mandate would not be affected. At the time of the call, it was unclear how the administration arrived at this data point.
Under President Obama, birth control was considered preventive care and had to be included on employees' health plans. The administration offered partial exemptions for religious nonprofit groups, but Trump's HHS has vastly broadened the opt out option.
Religious freedom advocates and pro-life groups are cheering Trump's announcement.
"Americans United for Life applauds the actions of the Department of Health and Human Services to ensure that the right of conscientious employers and employees not to participate in or provide abortion-causing drugs is protected in law," AUL President and CEO Catherine Glenn Foster said in a statement. "Millions of Americans want no part of an insurance system that subsidizes the destruction of innocent human life, and HHS’s new interim regulation respects that principled stand.”
The Catholic Association applauded Trump for protecting Americans from an overbearing government.
"Today’s action is more than regulatory relief for people of faith, it is a ray of sunshine signaling to faithful Americans that they need not fear government bullying like that endured by the Little Sisters of the Poor," the group said.
Little Sisters of the Poor, you'll remember, took the Obama administration to court over the law that would have violated their beliefs. Their case went all the way to the Supreme Court.
Meanwhile, as expected, feminist groups are decrying the decision and are accusing Trump of "turning back the clock."