It's Official: Democrats Are The Extremists Today 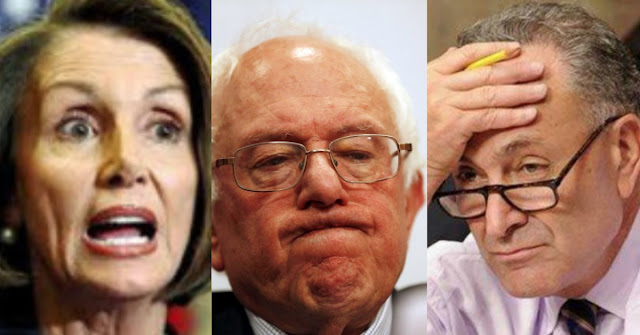 ﻿
Partisanship: Everyone knows that the country is more politically polarized than ever, but most don't know why.
Data from the highly respected Pew Research Center provides a definitive answer. It's because Democrats have moved sharply to the extreme left.
The Pew report — titled "The Partisan Divide on Political Values Grows Even Wider" — is the latest in a decades-long series of surveys it has conducted to gauge people's views on various key issues, including the size of government, immigration, corporate profits, race relations.
The authors of the report note the "divisions between Republicans and Democrats on fundamental political values ... reached record levels during Barack Obama's presidency. In Donald Trump's first year as president, these gaps have grown even larger."
Given the way politics gets reported these days, it's easy to conclude that the widening gap is the result of Republicans become more extreme in their views.
That is, after all, a mantra among Democrats and the press.
The GOP is the party of racist, sexist, xenophobic, right-wing extremists, we hear over and over again, while Democrats are but humble centrists.
The Pew data, however, make it clear that the shift toward the extreme has happened among Democrats, not Republicans. 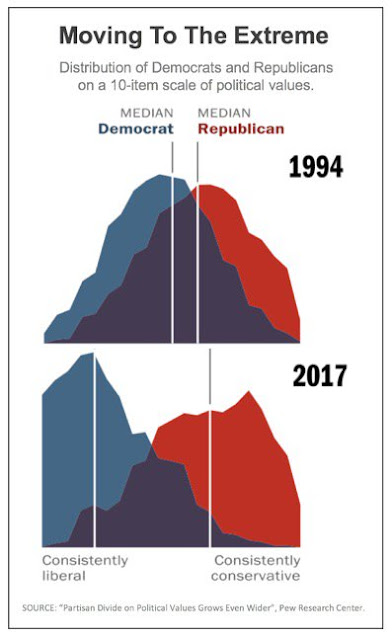 This can be seen in dramatic fashion when you look at where the center of each party was in 1994, and where it is today.

Pew used a 10-item scale of political values to determine ideological purity among those who claim affiliation with the two parties.

The results show that while the Republican center moved only slightly to the right over the past 23 years, the center of Democratic part shifted far to the left. (See the nearby chart.)


Take a look at specific value questions Pew asks and you can see why.
Pew asks, for example, whether poor people have it easy because they can get government benefits without doing anything in return. In 1994, 63% of Republicans agreed with this sentiment, as did 44% of Democrats.
This year, 65% of Republicans agreed — a 2-point increase — while just 18% of Democrats did — a 26-point drop.
Nearly two-thirds (65%) of Democrats used to believe that most people who want to get ahead can do so if they work hard.
Today, just 45% of Democrats believe this.
Among Republicans, the change was negligible — it went from 73% in 1994 to 77% today.
How about the question of whether racial discrimination is the "main reason many black people can't get ahead these days"?
In 1994, just 39% of Democrats and 26% of Republicans felt this way.
That was 14 years before the U.S. elected a black president.
Now, after eight years of Obama in the White House, 64% of Democrats say racism is the main reason blacks can't get ahead, while 14% of Republicans do.
National defense?
Back in 1994, 44% of Republicans said the best way to secure peace was through military strength. Today, that figure is 53% — an increase of 9 points.
But on the Democratic side, the share who agreed with "peace through strength" dropped from 28% to 13% — a 15-point drop.
Pew also asked whether "corporations make too much profit."
In 1994, the gap between Democrats and Republicans on this issue was 18 percentage points.
Today, it's 30 points.
In this case, the entire increase in the gap came from Democrats. While 61% of them said in 1994 that corporations make too much money, 73% now feel that way.
There's been no change on the Republicans side —  it's remained at 43%.
One issue where Republicans shifted further out to the edge than Democrats was on whether environmental laws and regulations cost too many jobs and hurt the economy.
But on one big social issue, Republicans have become far more moderate over the years.
The Pew survey asks whether homosexuality should be discouraged by society.
In 1994, 58% of Republicans and 42% of Democrats said it should.
By 2017, the share of Republicans who felt that way dropped 21 points, in tandem with the decline among Democrats.
Of course, if you want to see how extreme Democrats have become, all you need to do is look at who is now considered the soul of the party — far-left liberal Sen. Elizabeth Warren — or the fact that a substantial number of Democratic lawmakers have signed onto Bernie Sanders' radical "Medicare for all" plan.
Meanwhile, conservatives couldn't even muster a majority of Republicans in the Senate to repeal ObamaCare.
Democrats and their water carriers in the press are like people on a boat that is drifting off to sea, but are convinced that it's the land that's moving, not them.
http://www.investors.com/politics/editorials/pew-research-center-study-shows-that-democrats-have-shifted-to-the-extreme-left/
Posted by Frances Rice at 11:17 PM