Former FiveThirtyEight Writer: After I Got The Data, Support For The Gun Control Policies I Liked 'Crumbled' 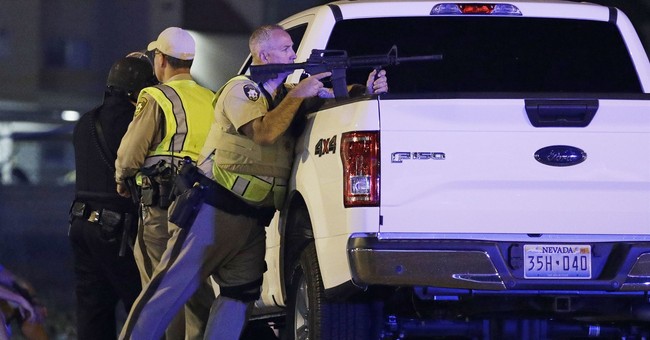 
---
An Average American’s Comment About Liberals’ Pushing Their Gun Grab Agenda In The Wake Of The Las Vegas Mass Murder:


The shooter violated a ton of laws starting with the law against murder. Didn't work too well, eh? The hue and cry for laws against guns is just another way of saying that human beings shouldn't be allowed to run around loose. Some shouldn't, but that does not mean that we should all be locked up (and who would be qualified to turn the key? eh?) Besides, removal of weapons does not remove intent to kill; the killer will simply use another weapon. Such as vehicles, Molotov cocktails, IED's, machetes, baseball bats (sometimes used by "Antifa creeps), you name it. Killing is a matter of will, not weapons; it will not be dealt with by regulating instruments.
----
In Other News:

Still No Evidence of Trump-Russian Collusion


After investigating for nearly 9 months…
Conducting more than 100 interviews over more than 250 hours…
Producing more than 4,000 pages of transcripts…
Reviewing more than 100,000 pages of documents…
Interviewing every intelligence community official who drafted the report on Russian election meddling…
Speaking with all relevant Obama administration officials…
Hearing from every Trump campaign official the committee has asked to appear…
The Senate Intelligence Committee still has not found any evidence of collusion between the Trump campaign and Russia.
Watch Here: Sen. Richard Burr: Intel Committee Still Does Not Have Any Findings On Collusion With Russia


SEN. RICHARD BURR: “There are concerns that we continue to pursue. Collusion. The committee continues to look into all evidence to see if there was any hint of collusion. Now, I’m not going to even discuss initial findings because we haven't any.”
Complied by the Republican National Committee
_______________


Quick recap: A top Obama CMS official testified Monday that an “aggressive” Democrat Sen. Bob Menendez was “very hostile” in his attempts to resolve a dispute over his wealthy donor’s overbilling of Medicare – conversations that included Harry Reid and Kathleen Sebelius.
Sebelius testified that a 2012 meeting with Menendez was “unusual” for two reasons:
1) It was the only time Reid ever asked her meet with a member of Congress, and
2) It was the only time she was asked to meet about a CMS billing dispute.
(Note: Menendez’s donor was already convicted of improperly billing and stealing $100M from the federal government.)
Watch Here
JAMES ROSEN: The former head of the Health and Human Services Department said she found it “unusual” when then-Senate Majority Leader Harry Reid asked her to meet with Senator Bob Menendez about a Medicare billing dispute in 2012. This testimony from Kathleen Sebelius marked the latest twist in Menendez’s bribery and corruption trial. Here is correspondent, David Lee Miller.
DAVID LEE MILLER: A handful of supporters and protesters greeted Democratic U.S. Senator Bob Menendez as he arrived for day 15 of his bribery trial. Appearing under subpoena, prosecution witness, former Health and Human Services Secretary Kathleen Sebelius, testified about a meeting involving Senator Menendez. According to the prosecution, eye doctor, Dr. Saloman Melgen, gave Menendez thousands of dollars in gifts and political contributions in exchange for Menendez using his influence to help the doctor obtain visas for girlfriends and help in business deals. In August of 2012, Secretary Sebelius attended a meeting with Menendez at the office of then-Majority Leader Harry Reid. Sebelius told the court quote, “Everybody did some talking, but Senator Menendez, it was his meeting, so he presented the issues he was concerned about.” Prosecutors say there was only one issue concerning Menendez, convincing the secretary to change Medicare policy to benefit Dr. Melgen, who was appealing a Medicare decision that he overbilled the agency $8.9 million. Sebelius told the court quote, “The discussion involved policy this case has triggered.” The defense tried to show that there were other subjects discussed, but Sebelius held firm.
MILLER (CLIP): Do you agree with her characterization of that meeting, the secretary’s characterization?
SEN. BOB MENENDEZ (CLIP): As I have told you, never going to speak about this trial. Our speaking will be in the courtroom.
MILLER (CLIP): Does that mean you are going to testify?
MILLER: In earlier testimony, a former Medicare official testified that the senator had an “aggressive tone” during a 2009 phone call. That call ended abruptly, when the senator realized he wasn't going to get what he wanted.
Complied by the Republican National Committee
Posted by Frances Rice at 4:40 PM