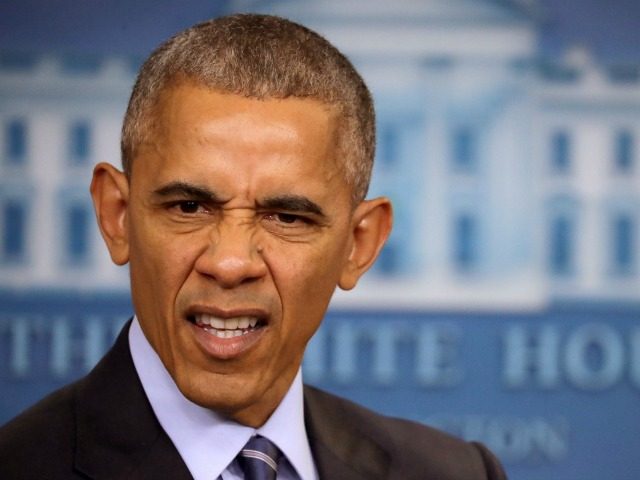 Former president Barack Obama’s official campaign organization has directed nearly a million dollars to the same law firm that funneled money to Fusion GPS, the firm behind the infamous Steele dossier. Since April of 2016, Obama For America (OFA) has paid over $972,000 to Perkins Coie, records filed with the Federal Election Commission (FEC) show.


The Washington Post reported last week that Perkins Coie, an international law firm, was directed by both the Democratic National Committee (DNC) and Hillary Clinton’s campaign to retain Fusion GPS in April of 2016 to dig up dirt on then-candidate Donald Trump.
Fusion GPS then hired Christopher Steele, a former British spy, to compile a dossier of allegations that Trump and his campaign actively colluded with the Russian government during the 2016 election.
Though many of the claims in the dossier have been directly refuted, none of the dossier’s allegations of collusion have been independently verified. Lawyers for Steele admitted in court filings last April that his work was not verified and was never meant to be made public.
OFA, Obama’s official campaign arm in 2016, paid nearly $800,000 to Perkins Coie in 2016 alone, according to FEC records. The first 2016 payments to Perkins Coie, classified only as “Legal Services,” were made April 25-26, 2016, and totaled $98,047.
A second batch of payments, also classified as “Legal Services,” were disbursed to the law firm on September 29, 2016, and totaled exactly $700,000. Payments from OFA to Perkins Coie in 2017 totaled $174,725 through August 22, 2017.
FEC records as well as federal court records show that Marc Elias, the Perkins Coie lawyer whom the Washington Post reported was responsible for the payments to Fusion GPS on behalf of Clinton’s campaign and the DNC, also previously served as a counsel for OFA.
In Shamblin v. Obama for America, a 2013 case in federal court in Florida, federal court records list Elias as simultaneously serving as lead attorney for both OFA and the DNC.
OFA, which managed Obama’s successful re-election campaign in 2012, retooled after that campaign to focus on enacting the president’s agenda during his final term in office.
The group reorganized again after the 2016 election and planned to use its staff and resources to oppose President Donald Trump. During the entire 2016 campaign cycle, the group spent only $4.5 million, according to FEC records.
Federal records show that Hillary Clinton’s official campaign organization, Hillary For America, paid just under $5.1 million to Perkins Coie in 2016. The DNC paid nearly $5.4 million to the law firm in 2016.
The timing and nature of the payments to Perkins Coie by Obama’s official campaign arm raise significant questions about whether OFA was funding Fusion GPS, how much Obama and his team knew about the contents and provenance of the dossier long before its contents were made public, and whether the president or his government lieutenants knowingly used a partisan political document to justify official government actions targeting the president’s political opponents named in the dossier.
According to the Washington Post, Fusion GPS was first retained by Perkins Coie on behalf of the Democratic National Committee (DNC) and Hillary Clinton’s presidential campaign in April of 2016.
At the same time that Hillary’s campaign, Obama’s campaign organization, and the DNC were simultaneously paying Perkins Coie, the spouse of one of Fusion GPS’s key employees was working directly for Obama in the West Wing.
Shailagh Murray, a former Washington Post reporter-turned-political operative, was serving as a top communications adviser to Obama while the Obama administration was reportedly using information from the dossier to justify secret surveillance of Trump campaign staff.
Murray is married to Neil King, a former Wall Street Journal reporter who was hired by Fusion GPS in December of 2016.
While at the Wall Street Journal, King worked alongside Fusion GPS’s core team, even sharing bylines with Glenn Simpson, the Fusion GPS executive who personally hired Steele to probe Trump’s alleged Russia connections.
The importance of the dossier funded by Democrats, commissioned by Fusion GPS, and compiled by Steele, is difficult to overstate given that its contents were reportedly briefed to both President Obama and then-President-Elect Trump.
The dossier was eventually published in full by BuzzFeed on January 10.
On January 12, according to CNN then-FBI Director James Comey had briefed Trump on the allegations in Steele’s dossier.
Steele admitted in court filings that he had shopped much of the information in his dossier to numerous media outlets beginning in September of 2016.
Fusion GPS, which has been accused of illegally operating as an undisclosed agent of foreign governments, is currently facing multiple congressional inquiries into its activities and its clients.
Bill Browder, whose attorney was allegedly murdered by Russian authorities after publicizing explosive allegations of Russian fraud and money laundering, alleged in congressional testimony last July that Fusion GPS was paid by Russians to undermine U.S. sanctions against the country.
Late last week, Fusion GPS reportedly struck a deal with U.S. House investigators regarding a federal subpoena of the firm’s bank records.
And in September, Sen. Chuck Grassley (R-Iowa), who serves as chairman of the Senate Judiciary Committee, reportedly requested that the U.S. Treasury Department’s financial crimes unit provide his committee with all suspicious activity reports related to Fusion GPS’s bank transactions.
Following reports of Perkins Coie’s role in funneling money to Fusion GPS, the Campaign Legal Center, a non-partisan campaign finance watchdog, filed a complaint with the FEC alleging that the secret funding schemes violated federal campaign disclosure laws.
Fusion GPS is also facing a separate defamation suit in federal court related to claims in the dossier.
That case, which was brought by three Russian businessmen who claim to have been libeled in the Steele dossier, was filed in federal court in Washington, D.C., in early October. Fusion GPS is yet to respond to those allegations in court.
Sean Davis is the co-founder of The Federalist.
http://thefederalist.com/2017/10/29/obamas-campaign-gave-972000-law-firm-funneled-money-fusion-gps/
Posted by Frances Rice at 11:13 AM