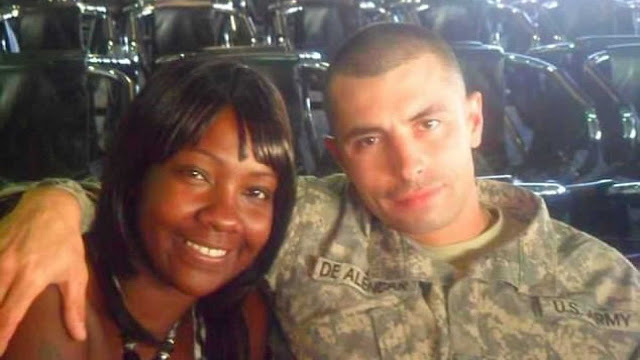 In response to a claim by a Florida congresswoman this week claiming that President Donald Trump is disrespectful to the loved ones of fallen American soldiers, an African-American Gold Star widow released a video of a phone conversation she had with the President in April about the death of her husband who was killed in Afghanistan.
The video, obtained by The Washington Post, shows President Trump being respectful and kind to the widow of Army Staff Sgt. Mark R. De Alencar.
“I am so sorry to hear about the whole situation.” President Trump said. “What a horrible thing, except that he’s an unbelievable hero.”
“Thank you. I really, really appreciate it,” Natasha De Alencar said. “I really do, sir.”
Trump warmly welcomed her to the White House if she ever visited Washington D.C., saying that he considers her family.
“If you’re around Washington, you come over and see me in the Oval Office,” Trump continued. “You just come over and see me because you are just the kind of family … this is what we want.”
“Say hello to your children, and tell them your father, he was a great hero that I respected,” Trump said. “Just tell them I said your father was a great hero.”
The video comes a day after White House Chief of Staff John Kelly gave an emotional speech during the White House press briefing on how disgusting it was that the media would intentionally distort the words of the President to attack him over the death of a fallen American hero.
http://www.dailywire.com/news/22540/trump-was-right-gold-star-widow-releases-trumps-ryan-saavedra
Posted by Frances Rice at 6:29 PM