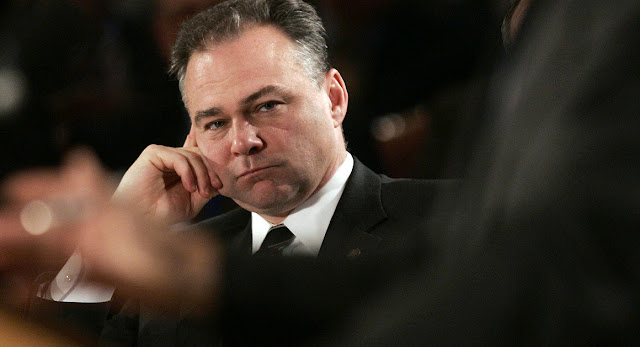 Just One Example Of Tainted Tim's Ethical Lapses Exposed In The Below Article: Teva Pharmaceuticals gave him $12,000 for travel to the August 2006 Democratic Governors Association meeting in Aspen. The Israeli drug company lobbied the state government and later bought a facility in Forest, Virginia.
______________________


By Isaac Arnsdorf
The former Virginia governor's $160,000 in disclosures could be a political liability for Clinton's leading VP pick.
Virginia Sen. Tim Kaine took advantage of the state’s lax gift laws to receive an $18,000 Caribbean vacation, $5,500 in clothes and a trip to watch George Mason University play in the NCAA basketball Final Four during his years as lieutenant governor and governor, according to disclosures he filed.
Now a leading contender to be Hillary Clinton’s running mate, Kaine reported more than $160,000 in gifts from 2001 to 2009, mostly for travel to and from political events and conferences, according to disclosures compiled by the Virginia Public Access Project. The givers included political supporters, a drug company that soon after bought a facility in Virginia, and Dominion, the state’s biggest provider of electricity.
While legal under Virginia’s unusually permissive ethics rules, the gifts could become attack-ad fodder after similar presents led to corruption charges for Gov. Bob McDonnell, whose conviction the Supreme Court overturned Monday. Republicans could also use the records to portray Kaine as part of the self-dealing establishment in a cycle animated by hostility toward the political class.
...
Virginia’s standards are widely perceived as too permissive, especially in the wake of the McDonnell case. And even the appearance of lower standards could become an issue in the national spotlight.
“The danger here is that there’s already a narrative on Hillary Clinton: It’s crooked cronyism, and any pick or any other action that drives that narrative is going to be bad for her,” said Matt Moon, a former Republican National Committee deputy research director, communications director for the 2014 reelection campaign of Governor Rick Scott (R-Fla.), and now executive vice president of opposition research consulting firm Delve. “If you’re on the Clinton campaign side, you want to look at potential vulnerabilities in how a VP pick would drive an opposition narrative.”
Kaine has acknowledged the defects with his state’s policies, especially compared with the federal restrictions he now faces as senator. “With no limit on the amount of such gifts and with the exceptions for friends and family so broad, Virginia’s system is all but guaranteed to create problems,” he wrote in a 2013 Washington Post op-ed. “The benefits of the federal rule are obvious. I regret that I didn’t propose adopting it when I was governor.”
Shortly after winning the governorship in 2005, Kaine and his family vacationed on the exclusive West Indies island of Mustique in a house belonging to Charlottesville-area investor James B. Murray Jr. Murray made a fortune investing in cellphones together with Kaine’s Senate predecessor, Mark Warner. Murray invited Kaine to spend a week at his house to relax after the campaign.
“I didn’t consider it a gift: There was no cash, I just let him use a house,” Murray said in an interview with Politico. “There was no quid pro quo. I don’t have any business with him.”
For the purpose of the disclosure, Kaine’s staff determined that $18,000 was the fair market value of a week’s stay. Kaine paid all his own expenses besides lodging.
“It’s just the kind of thing you do for a friend, but who’s to draw the line?” Murray said. “It’s probably better to declare everything.”
Kaine also accepted $5,500 worth of clothes in 2003 and 2005 from Stuart C. Siegel, a close friend and campaign booster who was then chairman of a Virginia-based discount menswear company. The disclosure also lists a baccarat crystal vase, valued at $0. Siegel didn’t answer a request for comment through a foundation of which he’s a board member.
Most of the gifts came in the form of travel to conferences or campaign events. President Barack Obama’s 2008 campaign gave Kaine $45,000 for airfare and lodging. Kaine’s own leadership committee, Moving Virginia Forward, footed $20,000 of travel expenses. The Democratic Party of Virginia paid almost $11,000.
Richmond-based power company Dominion gave Kaine $2,000 for travel to meetings of the Democratic Governors Association and Southern Governors Association and to watch George Mason University play in the NCAA Final Four in 2006. Kaine rode on Dominion’s jet because he missed the commercial flight he booked to attend a state legislator’s funeral. A regulated utility, Dominion lobbies the state on energy policy.
Teva Pharmaceuticals gave him $12,000 for travel to the August 2006 Democratic Governors Association meeting in Aspen. The Israeli drug company lobbied the state government and later bought a facility in Forest, Virginia. BET co-founder Sheila C. Johnson treated him to $4,250 for two dinners, travel to a charity benefit and a trip to Denver. ADR Software CEO E. Scott Kasprowicz, a conservationist and an environmental advocate, paid $3,000 for travel to political and charity galas.
By contrast, Kaine’s successor, Bob McDonnell, along with his wife, Maureen, accepted — and failed to disclose — loans and gifts totaling more than $175,000, including vacations, clothes and a Rolex watch, all from Jonnie Williams, a businessman who wanted government help promoting a tobacco-based dietary supplement.
In McDonnell’s defense, his lawyers tried to argue that Kaine accepted more gifts. But as the details of McDonnell’s indulgences emerged at trial, a jury convicted McDonnell on 11 felony counts in 2014. Before sentencing, Kaine was among many political leaders of both parties who sent letters asking the judge for leniency, citing McDonnell’s efforts to restore felons’ voting rights.
“It seems fair to examine any request for mercy by exploring whether the petitioner has been merciful in similar circumstances,” Kaine wrote. “I am convinced that Governor McDonnell showed mercy to convicted felons not for political reasons or because he had anything personally to gain by doing so.”
McDonnell was sentenced to two years in prison but appealed all the way to the Supreme Court. This week the justices vacated the conviction, reasoning that hosting an event or setting up a meeting didn’t amount to an official act, like a vote, grant or rule, in order to qualify as corruption.
The original gift disclosures by Kaine that generated the Virginia Public Access Project’s data were collected by the Secretary of the Commonwealth but routinely purged after five years.
Donovan Harrell contributed to this report.
________________


Even before he was picked, Hillary Clinton’s running mate Tim Kaine was met with progressive anger for his views on banks, trade, abortion and other positions out of step with the base she needs to attract. Here’s the greatest hits from night one:


What They Are Saying: Kaine’s Selection Already Angering Progressives


“Liberal Groups Were Teed Up To Criticize The Pick” Of Kaine