IN THE HOUR OF CHAOS premieres Tuesday on Ch. 8 in Cambridge, Massachusetts

In new era of turmoil, ‘In Hour of Chaos’ doc gives a timely look back at MLK Sr. 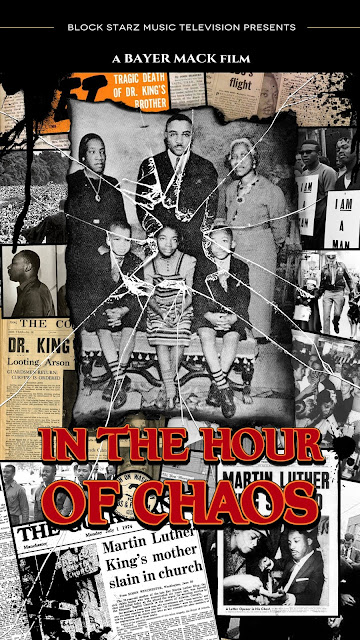 Given all the violence and unrest sweeping through Baton Rouge, Dallas, Miami and Minnesota and the debates over black, blue or all lives mattering in the fallout, it seems relevant to dial back to earlier times in the black struggle in America – back to the Rev. Dr. Martin Luther King Jr., but before he marched out from Selma, and back to the man who started it all, if by proximity alone: the Rev. Martin Luther King Sr., father of the historical Civil Rights leader, aka “Daddy King.”
He’s the central subject of Bayer Mack’s documentary “In the Hour of Chaos,” to debut on Cambridge Community Television’s Channel 8 at 8 p.m. Tuesday and plays again four times over the next four days.
Mack, who hails from Louisville, Ky., and is the founder of Block Starz Music Television, an independent film and television company, is no stranger to Cambridge audiences. In 2014 he partnered with Cambridge resident Hasson J. Rashid, who hosts two shows on CCTV, to get Mack’s documentary “Oscar Micheaux: The Czar of Black Hollywood” in its lineup.
“In the Hour of Chaos” unfurls a languorous, solemn rewind of history, though it takes its name from the 1988 song by the rap group Public Enemy, “Black Steel in the Hour of Chaos.” The primary source for the film is Murray M. Silver’s book, “Daddy King and Me,” as well as other autobiographies and biographies about Daddy King, his son and other King family members and associates.
One of the film’s starkest revelations is the degree of violence and poverty MLK Sr. grew up in amid the backwoods of Georgia, and the conflicts and tragedies that shaped his son as he emerged from the shadow of his father.
“There are critical lessons in this film that we as Americans still haven’t learned,” Mack said of the project, “which is why we are still fighting old battles.”
For details and other broadcast times, go to CCTV’s website.