BREAKING: Attack Was City Resident of Tunisian Origin
DEVELOPING: A large truck loaded with guns and hand grenades drove into a crowd of people who had gathered for a Bastille Day fireworks show Thursday in the southern French city of Nice, killing at least 75 people and injuring 100 more in an apparent terror attack. 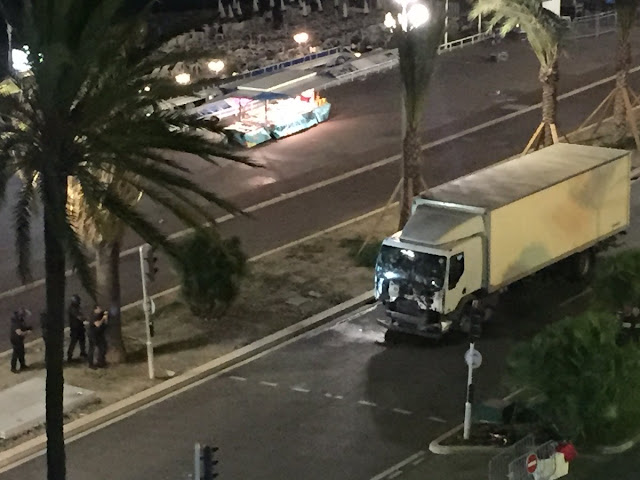 Regional president Christian Estrosi confirmed the death toll in a post on Twitter, calling Thursday "the worst tragedy in the history of Nice." Estrosi also asked residents to stay indoors immediately following the attack.
French Interior Ministry spokesman Pierre-Henry Brandet said the truck driver had been "neutralized" and an investigation would confirm whether he had acted alone. Local media reported that the probe was being led by anti-terrorism police.
A local government official told Fox News that the truck was driving full speed when it hit the crowd. A journalist for the local Nice-Matin newspaper said the fireworks display was over and the crowd was getting up to leave when they heard a loud noise and screams.
"A fraction of a second later, an enormous white truck came along at a crazy speed, turning the wheel to mow down the maximum number of people," he said. "I saw bodies flying like bowling pins along its route. Heard noises, cries that I will never forget."
Allemand said people took shelter in a nearby restaurant, where he continued to hear people shouting for missing family members. He ventured out and saw bodies, blood and body parts all along the road.
"This evening, it was horror," Allemand concluded.
A witness, Wassim Bouhlel, told the Associated Press that he saw the truck drive into the crowd, then witnessed the driver emerge with a gun and start shooting.
"There was carnage on the road," Bouhlel said. "Bodies everywhere."
Estrosi confirmed to BFM TV that the driver fired on the crowd before being killed by police.
Nice's public prosecutor told reporters early Friday that bodies of the victims were scattered for over a mile along the Promenade des Anglais, a major thoroughfare along the Mediterranean Sea.
Sebastien Humbert, a regional police prefect, told BFM TV the truck traveled "over a long distance, which explains this extremely heavy toll."
There was no immediate claim of responsibility, but but France has recently seen a spate of dramatic assaults from by jihadist groups, including the Islamic State group (ISIS) which straddles Iraq and Syria.
A U.S. official told Fox News that U.S. Homeland Security Jeh Johnson had been briefed on the attack. The official added that the attack was in line with ISIS, which has become "increasingly brazen" in its attacks as it comes under increasing military pressure in Iraq and Syria.
The attack happened at around 10:30 p.m. local time. A witness, identified only as Chloe, told FranceTV Info, "We heard gunfire, a lot. A crowd came to us and told us to run ... We went into a tapas bar and hid in the bathroom for half an hour.
"We went out and again we heard people running and saying 'truck, truck,' so we hid in the bathroom for an hour. The manager took us out by the back door and then I went home."
Nice-Matin later posted an image of the truck on Twitter, captioning it, "The truck that drove into the crowd."
July 14 is a national holiday in France that commemorates the storming of the Bastille prison in Paris and the start of the French Revolution.


Fox News' Catherine Herridge and The Associated Press contributed to this report.