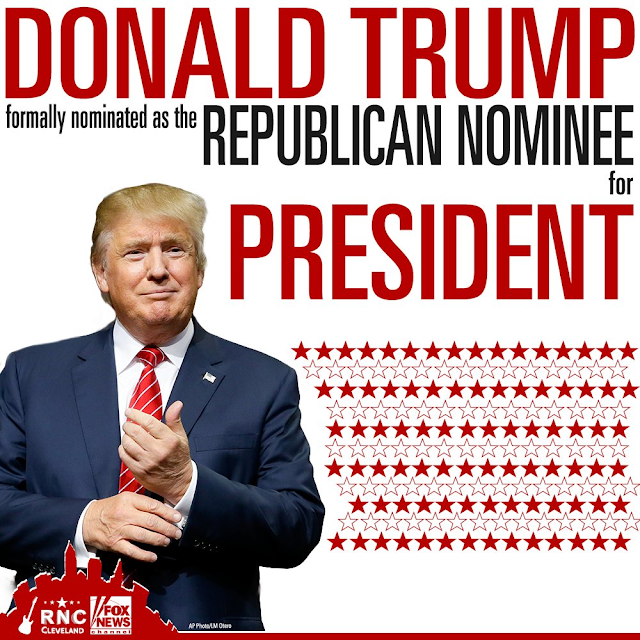 Trump secured the 1,237 delegates necessary to officially be named the Republican candidate for president. New York - Trump's home state - pushed Trump over the edge with its delegate tally. Trump was at 1,267 after New York cast its votes.
The final tally for Trump: 1,725
Sen. Ted Cruz finished second with 484 delegates. Gov. John Kasich (125) and Sen. Marco Rubio (123) rounded out the top four.
As Trump achieved the requisite number, "New York, New York" played in the convention center.
Donald Trump Jr., in casting New York's votes for his father, said "We are finally going to put New York in play this time around."
In addition to Donald Trump Jr., Ivanka, Eric and Tiffany Trump were visible in the New York delegation.
Donald J. Trump responds: "Such a great honor to be the Republican Nominee for President of the United States. I will work hard and never let you down! AMERICA FIRST!"
SOME CONVENTION SPEECH HIGHLIGHTS
http://www.foxnews.com/politics/elections/2016/events/republican-national-convention/


The evening's events finish with Sajid Tarar, founder of American Muslims for Trump, leading a benediction.
Donald Trump Jr.'s speech was also well received by the convention. Harold Haralson, a delegate from Oklahoma told FoxNews.com "I thought it was a very effective message. You could see the mannerisms of his father.
NJ Gov. Chris Christie's speech was well received tonight, with some delegates telling FoxNews.com that his speech will have broader appeal.
"The way he delivered the speech, I think, spoke to the undecided. He present the case against Hillary Clinton in a way the average person would understand," Phil Phillips, an Alabama delegate said.
Ben Carson hits the stage, getting one of the strongest introductions of the night. He tells the audience that "he is not politically correct."
Carson makes reference to Saul Alinsky, the left-wing radical who he says Clinton took inspiration, and says the progressive agenda is contrary to the values of the founding fathers.
He says the election is about "we the people" and that it is time for the people to "rise up and take America back."
Sen. Shelley Moore Capito tells the convention: "President Obama has hurt the heart and soul of my state --- our proud coal miners and the communities where they live --- work -- and pursue happiness."
Capito references Clinton's promise “to put a lot of coal miners and coal companies out of business.”
"She wants to put thousands more Americans out of work. She has promised to devastate communities and families across coal country," she says.
Trump Jr. finishes a strong speech by saying his father would be "a president who doesn’t have to run a focus group or use data analytics to be able to form an opinion… who says what needs to be said, and not just what you want to hear."
He finished by calling the billionaire "a president who will unleash the greatness in our nation and in all of us. Who will give the hardworking men and women who built this great nation a voice once again."
He goes on to attack Clinton, saying she would be the first president to be unable to pass a simple background check.
Posted by Frances Rice at 11:50 PM