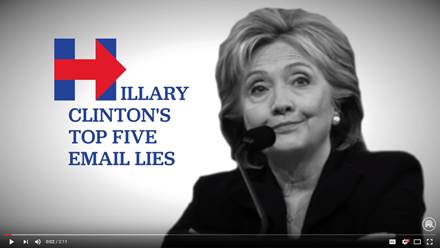 FBI FINDINGS EXPOSE CLINTON EMAIL LIES: FBI Director James Comey’s press conference made clear Hillary Clinton has been lying to the American people for more than a year about the secret email server she used to skirt government transparency laws and ultimately jeopardize U.S. national security.
National news outlets from across the country catalogued the outright falsehoods peddled by Clinton and her campaign aides, including her claim that she never sent or received classified information, that her server was permitted by the State Department, that she turned over all work-related emails, and that she set up her illicit email server for personal convenience. See the headlines below:
·         Associated Press: Clinton Email Claims Collapse Under FBI Probe


National security experts say Clinton’s illicit email server went beyond being “extremely careless.”
McClatchy reports: Hillary Clinton and her team clearly skirted the most basic rules for the handling of classified information, and their actions as outlined Tuesday by the director of the FBI went well beyond carelessness to an open flouting of known practices, security experts inside and outside the administration said Tuesday.
Experts were especially disdainful of the FBI’s finding that highly classified information turned up in emails that Clinton sent and received on her unsecured server.
That alone was in violation of the Foreign Affairs Manual, a comprehensive set of State Department policies, that, among other restrictions, require that a different computer system be used when dealing with classified documents and that a physical distance, or “air gap,” separate it from other computers.
“If she didn’t want to carry two systems, she could have had a staffer or one of the agents assigned to her protective detail hand her the (other) system,” said Scott Stewart, vice president of tactical analysis for Stratfor, an Austin, Texas-based global security consultancy. Stewart is a former Diplomatic Security Service special agent for the State Department.
“That’s not carelessness. That was intentional,” Stewart said.


The FBI’s findings are not only raising fresh doubts about her judgement and candor, they are also undercutting Clinton’s central arguments against Donald Trump.
The Wall Street Journal reports: Hillary Clinton has dismissed for more than a year the furor over her use of a private email server as overblown and asserted that she’d taken scrupulous care in protecting the nation’s secrets by following State Department protocols.
FBI Director James Comey undercut those assertions Tuesday even as he said he wouldn’t recommend bringing criminal charges.
His report winds down a yearlong probe of her use of a nongovernmental email server for State Department work. But it also presents challenges for the presumptive Democratic presidential nominee on two fronts.
It raises doubts about her candor, a point of vulnerability with voters, while undermining her argument that she has the sober judgment that she says Republican rival Donald Trump lacks.


Amid the fallout from the FBI’s findings, Democrats running in down ballot races now need to consider distancing themselves from Hillary Clinton.
Roll Call reports: Even if the law enforcement agency didn’t recommend charges, its criticism is sure to inflame the public’s doubts about the Democratic leader’s honesty and judgment.
That should worry Democrats, who so far have been mostly silent on the investigation’s findings.
Voters were already skeptical of Clinton’s character, enough that they rate her as one of the worst-ever choices for president .
And yet the party’s down-ballot hopefuls have thus far cozied up to the presumptive president
Unlike Republicans, many of them proudly proclaim their support and rarely offer more than light criticism of Clinton.
This week’s development, arriving on top of her existing unpopularity, raises questions about that strategy —even if Democrats show few signs of changing course.


IN THE STATES …
In Colorado, the state’s largest newspaper blasted Hillary Clinton following the FBI’s findings about her email server.

The Denver Post editorializes: Comey’s observations must sting, and the bureau’s findings are disturbing on several levels.

And he noted that Clinton, a longtime actor in the halls of power, should have known using an unclassified system wasn’t best for the country.

We’ve been disappointed with Clinton’s decision to set up her e-mail system in the way she did.

We continue to think the matter should give reasonable people pause.


In Iowa, Republicans blasted Hillary Clinton after the FBI released the findings of their criminal investigation into her email server.
The Des Moines Register reports: On a conference call with reporters, Republican Party Chairman of Iowa said, “this is a rigged system that obviously is showing some blatant favoritism.
The comments came a few hours after FBI Director James Comey announced that the agency would not recommend criminal charges against Clinton for distributing classified information on an unsecured private email server — even though he said doing so was “extremely careless.”
When asked if they thought Comey should resign, though, both Goertz and Kaufmann declined to go that far.
In Massachusetts, Hillary Clinton’s trust problem will hang over her all the way to election day.

The Boston Globe editorializes. ‘EXTREMELY CARELESS.” That’s not a description most voters want for a president, and those two words, spoken by FBI Director James B. Comey on Tuesday, will no doubt haunt Hillary Clinton into November.

The presumptive Democratic presidential nominee can accurately argue that the needless risk she took by handling classified information on a private e-mail server does not seem to have damaged national security — and that her Republican opponent does not exactly personify responsibility himself — but it’s still up to her to convince voters that she’s learned from her mistakes.

The investigation, which began last year after the revelation that Clinton had used a private e-mail server for official business while serving as secretary of state, did not result in criminal charges because, according to Comey, there was no evidence that Clinton intended to break the law.

But he did chastise the presumptive Democratic presidential nominee for allowing classified information onto her unsecured server, where it was more vulnerable to hackers and foreign spies.

The mishandled information reportedly includes information about the American drone program in Pakistan, which is widely known but nominally secret.


In New Hampshire, the Granite State’s largest newspaper excoriated Hillary Clinton’s ‘above the law’ attitude.
The Union Leader editorializes. If anyone else had carelessly left classified emails vulnerable to hostile hackers, they would go to jail.
But the rules don’t apply to Hillary Clinton.
Clinton sent or received 113 emails containing classified material at the time they were sent, shattering a lie she has maintained since the investigation into her unauthorized email server began.
FBI Director James Comey on Tuesday laid out a devastating case of Clinton’s reckless conduct, and then announced that he would not recommend criminal charges be brought.
Hours later, Clinton took the stage with Comey’s boss, President Barack Obama. Attorney General Loretta Lynch met with Bill Clinton days before Hillary Clinton finally sat down with the FBI.


In North Carolina, it will be a tough sell for Hillary Clinton to convince voters she can be trusted.
The Charlotte Observer editorializes: Comey described the former Secretary of State and her colleagues as “extremely careless in their handling of very sensitive, highly classified information.”
He pointedly declared that Clinton, in dealing with one stream of Top Secret information, “should have known that an unclassified system was no place for that conversation.
Now, she needs to convince us that she really means it – and that she can be trusted to uphold a higher standard in the future.
After all of this, that will be a tough sell.
COMPLIED BY THE RNC
Posted by Frances Rice at 12:05 PM