Obama on Crime: Tear Down This Wall! 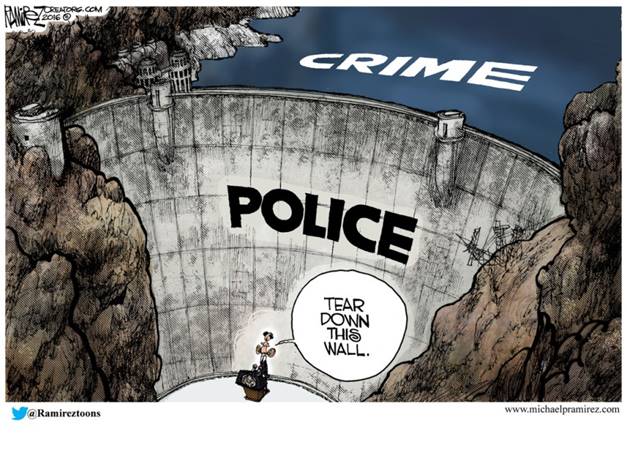 
On Barack Obama and violent crime, Michael Ramirez nails it. After all, if someone is breaking into your house in the middle of the night, do you call a community organizer?

Actually, if someone is breaking into your house, you might not want to wait until help arrives in any form. The National Rifle Association, America’s largest and most successful civil rights organization, reminds us of this:
The NRA political video:  https://youtu.be/Gb79Sq5BVj0
But that doesn’t detract from the point: law enforcement is the principal bulwark between us and barbarism, and half of America’s politicians are on the other side.


It was very appropriate that on Friday, the day after the massacre of five Dallas police officers, The New York Times devoted nearly the whole top half of its front page to four enormous photos of the death of Philando Castile, a black motorist killed by a Minnesota police officer.


Of course, the paper was printed prior to the Dallas murders; and even The New York Times might not have so prominently featured the Minnesota killing on its front page had the Dallas murders occurred a few hours earlier.


Nevertheless, it was completely appropriate. The New York Times has been in the forefront of the left's hysterical, hate-filled attacks on police officers and whites.


Also appropriately, on the day of the Dallas murders, the Times published two white-hating, police-hating pieces.


One was by Michael Eric Dyson, a radical black professor of sociology at Georgetown University.  The Dyson column is nothing more than a racist hit piece on "white America."


"At birth, (whites) are given a pair of binoculars ... Those binoculars are privilege; they are status, regardless of your class. In fact the greatest privilege that exists is for white folk to get stopped by a cop and not end up dead when the encounter is over."


Dyson wrote these words based on the police killings of two blacks last week, about which he knows nothing except the narrative of the (left-wing) media and what he has seen on some grainy phone videos.


And not once does Professor Dyson mention that the Minnesota police officer was Latino. Why would he? That would suggest that Latinos, too, are given racist binoculars at birth. But Dyson would never say so, because it is white America he loathes.


Nor does he note, or perhaps even know -- because of his left-wing binoculars -- facts such as these:


Does Dyson, a professor of sociology, not know these statistics? Does he not know that, statistically, whites have more reason to fear being murdered by a black than vice versa? If he doesn't, he shouldn't be teaching sociology. If he does, students should be aware that he is a left-wing, black nationalist propagandist, not a teacher.


The same day the Times published Dyson's piece, it published a second anti-white, anti-cop, hate-America piece by the mother of Michael Brown, the young black man killed in Ferguson, Missouri. That black grand jurors and even Obama's Department of Justice found the policeman who killed Brown was acting in self-defense after being attacked and thus justified him in doing so means nothing to The New York Times. So it published the grieving mother's anti-cop hate.


The blacks and whites of the left have led much of America, especially black America, to believe that cops are generally racist, that there is "systemic" racism and that whites are privileged and racist. It's all a lie that has had -- and will continue to have -- murderous consequences.


Just yesterday The New York Times published the results of a study conducted by a black Harvard professor of economics that shows that "when it comes to the most lethal form of force -- police shootings -- the study finds no racial bias."


"It is the most surprising result of my career," said Roland G. Fryer Jr., the author of the study.


Hume: Obama Sees Things Through The Eyes Of An Aggrieved Black Activist Rather Than Of A President


The video is at this link and the text is below:  https://youtu.be/r3BiaGKClpQ


Brit Hume comments on President Obama's sympathy for the Black Lives Matter movement:
BRIT HUME: In Dallas, Tuesday, President Obama will be trying to calm racial tensions that his own behavior has done much to aggravate. From his denunciation of the Cambridge, Massachusetts, police as acting, quote, stupidly in the arrest of law professor Henry Louis Gates, to his assertion that the motives of the Dallas cop killer are unclear, they aren't.

The president has consistently chosen to see things through the eyes of an aggrieved black activist rather than of a president of all the people. He's not failed to speak out whenever a black is killed by a white police officer, but has said next to nothing about the continued slaughters of blacks by other blacks in the streets of Chicago, Baltimore, and other cities.

He has made his sympathy for the Black Lives Matter movement obvious and never mind that the whole premise of the movement seems to be fallacious. No case has given the movement more impetus than the false claim that Michael Brown was shot down in cold blood while trying to surrender to a cop in Ferguson, Missouri two years ago.

And now a study led by a black Harvard law professor has examined 15 years of crime data from 5 major cities and 2 counties. The study found that while police were more often likely to get physical with black suspects than with white ones, when it came to police shootings, there was no racial bias. Did you hear that, Mr. President? No racial bias.
http://www.realclearpolitics.com/video/2016/07/11/hume_obama_sees_things_through_the_eyes_of_an_aggrieved_black_activist_than_of_a_president.html
______________________

Healing After Dallas, Without Obama
When the president repeatedly assumes the worst about police, he sends a dangerous message.


President Obama is scheduled to speak in Dallas Tuesday at a memorial service for the five police officers gunned down last week—but haven’t we already heard enough from him?


Mr. Obama’s initial response to the shootings was more of the same: equivocation mixed with an attempt to change the subject. He said there is no possible justification for violence against law enforcement, but then added a line about racial disparities in the criminal-justice system and finished with a nod to more gun control. “When people are armed with powerful weapons,” said the president, “it unfortunately makes attacks like these more deadly.”


Time and again during his presidency, in matters large and small, Mr. Obama has assumed the worst about police. Officers in Massachusetts, he told us months into his first term, “acted stupidly” when they responded to a 911 call about a possible burglary and arrested the black suspect for disorderly conduct.


The 2014 police shooting of Michael Brown, who attacked a cop after robbing a store in Ferguson, Mo., led to a Justice Department report criticizing the racial makeup of Ferguson’s police department and municipal workers, and concluding, without any evidence, that it is “critically important” for law enforcement “to strive for broad diversity among officers and civilian staff.”


After the Baltimore riots last year that followed the death in police custody of Freddie Gray, Mr. Obama once again condemned the lawbreakers, but not without adding: “We have seen too many instances of what appears to be police officers interacting with individuals, primarily African-American, often poor, in ways that raise troubling questions.” That’s trying to have it both ways.


Like others on the political left, Mr. Obama has made a habit of minimizing or ignoring the high black crime rates that obviously underlie tensions between poor minority communities and cops. More than 95% of black shooting deaths don’t involve the police, which would seem to undercut the notion that trigger-happy cops are hunting black men. Sadly, rates of murder, rape, robbery, assault and other violent crimes are 7 to 10 times higher among blacks than among whites, but liberals who don’t want to alienate black voters go to great lengths to explain away this behavior and focus instead on police conduct.


Yes, Mr. Obama has denounced what happened in Dallas, but he has also been winking at a Black Lives Matter movement that has spent the past two years holding rallies that call for (and sometimes feature) violence against cops. Like the president, these protesters maintain that the police are motivated by racial prejudice, not by the behavior of suspects. They insist that a biased criminal-justice system explains the black crime rate, not antisocial behavior. By indulging this narrative, Mr. Obama and his fans in the liberal media were playing with fire, and the Dallas carnage was the result.


Just last week, after the police shootings in Louisiana and Minnesota that sparked the Dallas protests, the Washington Post ran a long feature sympathetic to the left’s racist-cops narrative. The story offered a detailed breakdown of police shootings by race, but nowhere did it offer a racial breakdown of criminal behavior. By focusing on one and ignoring the other, the paper showed that it is most interested in pushing a political agenda.


The Dallas shootings have liberals requesting more national conversations about race. But these calls are mostly disingenuous. What liberals have in mind is more of a lecture, where they do the talking and everyone else nods in agreement. The left wants America to acknowledge that white racism explains black pathology; that the racial makeup of police departments and elected officials is crucial to good relations between law enforcement and black communities; and that reducing gun ownership will reduce gun violence.


In fact, America’s ghettos had lower levels of black crime and violence in the pre-1960s era, before major civil-rights legislation had even passed and in an era when racial discrimination was legal and more widespread. The racial makeup of the Ferguson police department may not have reflected that of the city, but the same cannot be said of other locales—Chicago, New York, Baltimore—where relations between police and black civilians are also strained despite the presence of black police chiefs, beat cops, prosecutors, judges, mayors and municipal workers. Dallas’s population is about 25% black, as is the police force, yet murders in the city were up by more than 70% in the first part of this year, according to the Dallas Morning News.


And if gun ownership rates drive gun violence, how do you explain the fact that rural areas of the country, where people own firearms at twice the rate of their urban counterparts, are significantly less violent?


Some good may yet come out of this Dallas tragedy if political leaders and the press stop treating Black Lives Matter like it’s the NAACP circa 1955. But don’t count on Mr. Obama to lead that effort.
http://www.wsj.com/articles/healing-after-dallas-without-obama-1468278417
Posted by Frances Rice at 9:05 AM