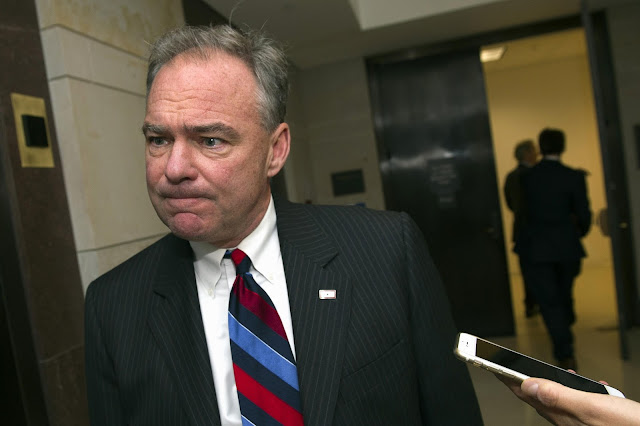 Tim Kaine’s lengthy self-described “conservative” record is wildly out of step with the Bernie Sanders wing of the party and will do little to unite the fractured party. The below information shows how far right Kaine was willing to go as a candidate for Governor.

https://www.buzzfeed.com/andrewkaczynski/listen-to-tim-kaines-im-conservative-radio-ads-from-2005?utm_term=.nr8wNX7JO
In his radio ads during the contentious 2005 Virginia gubernatorial campaign, Kaine touted his support for restrictions on late-term abortion, while his issues page mentioned Virginia’s history of “fiscal conservatism.”
At a rally introducing her new running mate, Virginia Sen. Tim Kaine, Clinton declared the senator was a “progressive who likes to get things done.”
Kaine has a liberal record as a senator — but when he was running for governor of Virginia in 2005, he brandished his conservative beliefs on “issues of personal responsibility.” The ads can be seen and downloaded on his gubernatorial election page.
In one radio, Kaine declares his social conservatism on issues like same-sex marriage and parental consent for abortion, and banning late-term abortion. (Kaine’s position overall has been that he personally opposes abortion as a Catholic, but will support abortion rights.)
“I’m conservative on issues of personal responsibility,” Kaine said. “As a former Christian missionary, faith is central to my life. I oppose gay marriage, I support restrictions on abortion — no public funding and parental consent — and I’ve worked to pass a state law banning partial-birth abortion.”
In another ad, titled “conservative,” Kaine says he will enforce the death penalty (which became an outsize issue in the 2005 campaign) and how he is “conservative on personal responsibility, character, family and the sanctity of life. These are my values, and that’s what I believe.”
Kaine’s issues page reveals support for so-called covenant marriage legislation, “enforcing the current Virginia restrictions on abortion and passing an enforceable ban on partial-birth abortion that protects the life and health of the mother,” and support for Virginia’s fiscal conservatism.
“Virginia has a long and storied history of fiscal conservatism and responsibility that has often been a model for the rest of the nation,” his issues page reads.

“I’m Tim Kaine, I’m running for governor and I’m not afraid to tell you where I stand. My opponent Jerry Kilgore has just come out with even more negative ads. Once again he’s hiding behind a slick radio announcer to distort my record. I’m conservative on issues of personal responsibility. As a former Christian missionary, faith is central to my life. I oppose gay marriage, I support restrictions on abortion — no public funding and parental consent — and I’ve worked to pass a state law banning partial birth abortion. Jerry Kilgore knows this the real difference is Attorney General Jerry Kilgore promoted a law banning partial birth abortion that he knew was unconstitutional. He played politics with abortion and as a result Virginia still has no ban. As governor, I’ll always put principle over politics and you’ll always know where I stand. That’s who I am and what I believe. I’m Tim Kaine, candidate for governor and this ad was paid for by Kaine for governor.”

“I’ll enforce the death penalty as governor and I’m against same-sex marriage. I’m conservative on personal responsibility, character, family and the sanctity of life. These are my values, and that’s what I believe.”
Complied by the RNC
Posted by Frances Rice at 6:39 PM