Democrats really are the party of collusion, corruption and cover-ups - No wonder they like Hillary so much 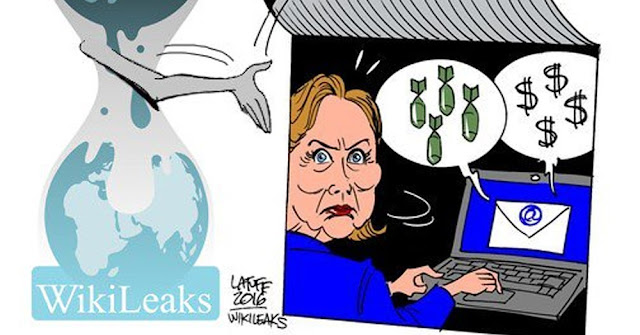 BUSTED: 19,252 Emails from DNC Leaked by Wikileaks, and Oh MAN Are They Great!

On Friday, website Wikileaks posted over 19,000 emails that were taken from the Democratic National Committee that show story manipulation and collusion with the MSM, internal attempts to sabotage Bernie Sanders during the primary, and a whole lot more.


This huge political story and scandal broke on Friday morning, though you may not have heard about it. It seems the collusion extended even to burying the story of the leak itself, as most news outlets gave it minimal coverage and little air time, and Twitter was accused of actively covering it up.


Here are the story highlights (we'll have much more on this throughout the weekend.)


Here's a breakdown from The Hill, one of the first sites to cover the leak:


WikiLeaks is presenting the emails as a searchable database, complete with an optional spam filter.


The emails span from last January to the end of May.


And here's a good starting summary from The Next Web:


Contained inside was evidence of collusion against Bernie Sanders by party officials,fake Craigslist ads targeting Donald Trump and “off the record” information shared with reporters in hopes that it wouldn’t remain off the record. The emails are just part of the “Hillary Leaks” Wikileaks plans to share in the coming days and weeks. Additionally, you’ll find details of DNC CEO Amy Dacey outlining a plan to bring upBernie Sanders’ religion to sway a largely christian populace as well as details about what dollar amount you’ll need to donate to get that oh-so-valuable face time with Hillary Clinton.


Make sure to click on those links. You'll thank me.


We all knew the party was working to help Hillary and burn Bernie, but now we have positive confirmation of some of the ways they did it. And one of those ways was to attack him on religious grounds. For serious.


Several of the emails released indicate that the officials, including Chairwoman Debbie Wasserman Schultz, grew increasingly agitated with Clinton's rival, Bernie Sanders, and his campaign as the primary season advanced, in one instance even floating bringing up Sanders' religion to try and minimize his support.


“It might may [sic] no difference, but for KY and WA can we get someone to ask his belief,” Brad Marshall, CFO of DNC, wrote in an email on May 5, 2016. “Does he believe in God. He had skated on saying he has a Jewish heritage. I read he is an atheist. This could make several points difference with my peeps. My southern baptist peeps woudl draw a big difference between a Jew and an atheist.”


Amy Dacey, CEO of the DNC, subsequently responded “AMEN,” according to the emails.


That's the CFO and the CEO of the DNC trying to figure out a way to knock Bernie's approval numbers down by attacking him on religion. I mean ... you guys!!!!


Just go to Twitter and type in #Wikileak and Bernie Sanders and you'll see a whole lot more on the DNC's attempt to sabotage Bernie in favor of Hillary.


Best summed up by the Washington Examiner:


Friday afternoon, users noted, "#DNCLeaks" was trending, with more than 250,000 tweets about it on the platform. By Friday evening, it vanished completely from the site's "trending" bar for at least 20 minutes. It returned as "#DNCLeak" after users erupted, though it was too late to quell their rage.


"Don't normally tweet political things, but why would @twitter pull the #DNCleaks from trending at #1. Sounds like censorship to me," said one. "Twitter is still trying to censor this trend! Now #DNCleak is trending instead of original #DNCLeaks! Keep talking guys, expose corruption," said another.


When the second hashtag, #DNCleak, began to trend, it had about 1/5 the number of tweets of the original plural hashtag.


Here's @ChuckTodd and the DNC scheming against @morningmika together. https://wikileaks.org/dnc-emails/emailid/5508 …


Debbie Wasserman Schultz, the chair of the Democratic National Committee, was furious when she was criticized by MSNBC host Mika Brzezinski.


Wasserman Schultz called for Brzezinski to “apologize” and told her co-worker Chuck Todd “this must stop.” The DNC chair even complained to MSNBC’s president.


“This is the LAST straw,” Wasserman Schultz replied, enraged. “This is outrageous. She needs to apologize.”


Again, the root cause being the DNC's obvious-at-the-time and now-proven coordinated effort to scrap Bernie and hand Hillary the nomination.


This from CNN may be the most fun thing of all, however:


Several Democratic sources told CNN that the leaked emails are a big source of contention and may incite tensions between the Clinton and Sanders camps heading into the Democratic convention's Rules Committee meeting this weekend. Representatives of the former primary rivals are meeting Friday night to discuss the issue.


"It could threaten their agreement," one Democrat said, referring to the deal reached between Clinton and Sanders about the convention, delegates and the DNC. The party had agreed to include more progressive principles in its official platform, and as part of the agreement, Sanders dropped his fight to contest Wasserman Schultz as the head of the DNC.


Oh and the "Best Headline" award goes to The Daily Beast for "DNC Leaked Emails: Do We Let Pedophile’s Lawyer Host Fundraiser?"


There's so much more, and we'll bring it all to you over the weekend and through the convention. The short version is that the DNC really hates Morning Mika, really hates Bernie Sanders, and really didn't want you to know about it.


And neither did Twitter or the television divisions, apparently.


Democrats really are the party of collusion, corruption and cover-ups. No wonder they like Hillary so much.
http://www.redstate.com/absentee/2016/07/23/collusion-corruption-cover-20000-emails-dnc-released-wikileaks/?utm_source=rsmorningbriefing&utm_medium=email&utm_campaign=nl