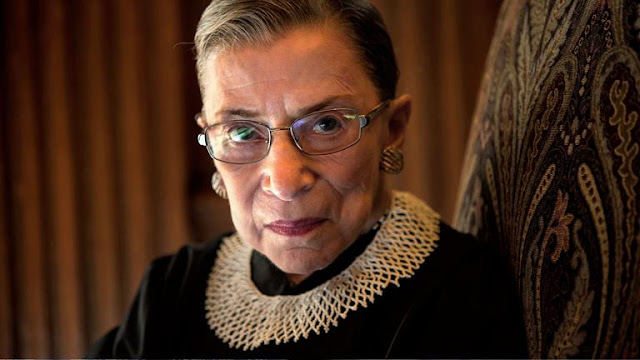 No wonder they call her Notorious RBG. Supreme Court Justice Ruth Bader Ginsburg has just declared war against Donald Trump, announcing that if he is elected president, she’d consider moving to New Zealand.


It would be a good place for her. I haven’t done a double-blind study, but it’s hard to recall — or find on the Web — an instance of another Supreme Court justice diving into politics quite the way Ginsburg has just done.
Ginsburg’s comment came in an interview with The New York Times’ Supreme Court scribe, Adam Liptak. He was so astounded that he warned his readers before he reported her comments that normally justices “diligently avoid political topics.”
Ginsburg, Liptak notes, “takes a different approach.” Then he quotes her as saying in her Supreme Court chambers: “I can’t imagine what this place would be — I can’t imagine what the country would be — with Donald Trump as our president.”
The justice said something similar to the Associated Press the day before. But it was to Liptak that she said she was reminded of what her late husband would have said: “Now it’s time for us to move to New Zealand.”
As she said it, according to Liptak, she was smiling “ruefully.”
It wasn’t the only line she crossed in the interview. Ginsburg also daydreamed-out-loud about overturning the gun-rights case known as Heller. The Times even seemed to want to protect Ginsburg from the fallout from this error of judgment, deleting it from the article until sharp-eyed readers called out the paper and the lines were restored.
The Trump comments are even more controversial. Imagine if one of the conservative justices had said such a thing about the prospect of, say, a President Hillary Clinton. There’d be a cacophony of calls for impeachment. Or at least demands that the justice recuse herself in cases involving Clinton.
Remember what happened when Justice Antonin Scalia, on a hunting trip in Louisiana, fetched up in a duck blind with Vice President Dick Cheney? Even though Scalia never made any political comments, the controversy rattled on for weeks.
The New York Times got so upset about it that it demanded that the other eight justices on the Supreme Court step in and remove Scalia from a case involving the vice president. The court ignored the Gray Lady’s advice.
So far, Ginsburg’s electioneering hasn’t been met with even a peep of protest from the editorial board of the Times — or any other Democratic Party-aligned paper. Then again, she’s a liberal.
When Clarence Thomas was nominated to the Supreme Court, the left even tried to make an issue of his wife’s job in the Bush administration’s Labor Department. Not only must a conservative judge stay out of politics, the left reckons, but so must his spouse.
It’s not my purpose here to belittle the heroic side of Ginsburg, who rose by dint not only of her great intelligence but a fantastically strong character.
Yet she has a whacky side. Four years ago she fetched up in Egypt during the so-called “Arab Spring” and gave an interview to Al-Hayat television, which asked her for advice in forming the country’s new constitution.
“I would not look to the US Constitution if I were drafting a constitution in the year 2012,” she said. She went on to suggest that Egyptians might look at the constitution of South Africa.
“That was a deliberate attempt to have a fundamental instrument of government that embraced basic human rights, had an independent judiciary,” Ginsburg said (as if this were not the case with the Constitution she is bound by oath to support).
To Egypt the justice also commended Canada’s new Charter of Rights and Freedoms and Europe’s Convention on Human Rights. “Yes,” she said, “why not take advantage of what there is elsewhere in the world?”
All those constitutions dole out rights like peanuts. South Africa’s grants people the right to a name, an occupation, a labor union, a clean environment, housing, health care, education, language and culture.
Ginsburg failed to mark for Egypt a difference with America’s Constitution: Ours grants almost no rights at all. What it does is prohibit the government from interfering with pre-existing rights that come from man’s — and woman’s — creator.
So maybe there’s a certain logic to Ginsburg jumping into the political fray. Maybe the other justices will follow. Chief Justice John Roberts could give a nominating speech for Donald Trump.
And if Trump manages to win the presidency, maybe Justice Ruth Bader Ginsburg will move to Auckland. She’d be right at home there. It turns out that New Zealand doesn’t even have a constitution.


Some things are better left unsaid. Exhibit A:
In recent interviews, Supreme Court Justice Ruth Bader Ginsburg expressed horror at the prospect of a Donald Trump presidency: “I can’t imagine what this place would be -- I can’t imagine what the country would be -- with Donald Trump as our president,” she told a reporter. “For the country, it could be four years. For the court, it could be -- I don’t even want to contemplate it.”
Ginsburg has earned a reputation for delivering sharply pointed opinions. It’s no secret that her politics are liberal, just as it’s no secret that Clarence Thomas’s are conservative. Despite the court’s partisan divide, however, tradition holds that justices stay above the political fray. And there’s much to be said for keeping up appearances.
The Founding Fathers gave justices lifetime appointments to ensure that they could remain impartial, and the court likes to be seen as studiously neutral in political matters. When the president delivers a State of the Union address, justices sit on their hands in the front row, refusing to applaud anything he says.
It’s a charade, of course, but an important one. The public expects justices to decide cases on the legal merits. And the court’s legitimacy rests on public acceptance of its rulings. The more people see the court as arm of a political party, the more likely they are to resist or ignore its decisions.
To sustain the rule of law, members of the court must respect the public’s expectation of judicial neutrality. If justices wish to increase public transparency of the court’s workings, there are better ways to do it.
Many Republicans are rightly outraged at Ginsburg’s comments, but Democrats should be, too -- and they surely would be if the situation were reversed.
Ginsburg’s loose lips should not set a precedent for the court. Publicly or privately, Chief Justice John Roberts ought to make that clear to all current and future members.
Posted by Frances Rice at 10:13 AM