Just days before the Republican National Convention is expected to formally nominate him to run for president, Donald Trump has taken his largest lead yet over Hillary Clinton.


This is the third week in a row that Trump has held the lead, although last week he was ahead by a statistically insignificant 42% to 40%. This week’s findings represent Trump’s highest level of support in surveys since last October and show Clinton continuing to lose ground. 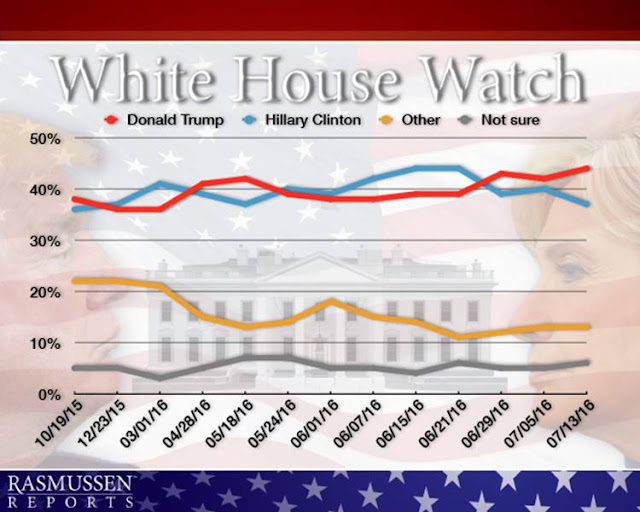 Clinton has cited her experience as a U.S. senator and secretary of State as making her more qualified for the presidency than Trump who has spent his life in private business. But voters now rate Clinton and Trump equally when it comes to their preparedness for the White House. That’s a noticeable shift in Trump’s favor from April when voters were nearly twice as likely to view Clinton as better qualified than her GOP opponent.


Trump now has the support of 80% of Republicans and 13% of Democrats. Clinton earns just 72% of the Democratic vote and picks up five percent (5%) of Republicans. Among voters not affiliated with either major party, Trump leads by 13 points, but 27% of these voters either like another candidate or are undecided.


Perhaps more troubling for Clinton is that she now trails by 17 points among white voters after the murder last week of five white policemen in Dallas which Trump has attributed to anti-police rhetoric by President Obama, Clinton and others. This is a noticeably wider gap than we have seen previously, while her support among black and other minority voters remains unchanged.


The survey of 1,000 Likely Voters was conducted on July 12-13, 2016 by Rasmussen Reports. The margin of sampling error is +/- 3 percentage points with a 95% level of confidence. Field work for all Rasmussen Reports surveys is conducted by Pulse Opinion Research, LLC. See methodology.


Democrats, however, are much more confident than Republicans that their presidential nominee will help their congressional candidates win in November.


Clinton is now the candidate with the bigger gender gap problem. She leads by eight points among women voters, but Trump posts a 21-point lead among men.


The Republican continues to lead among those 40 and over, but the candidates are now tied among younger voters. Still, those under 40 are also far more likely than their elders to like another candidate or be undecided.


Trump leads among voters in all income groups now except those who earn under $30,000 a year.


As recently as last week, Trump and Clinton were running neck-and-neck if Libertarian candidate Gary Johnson was added to the ballot.


Clinton was endorsed this week by her primary rival, Senator Bernie Sanders. Forty-four percent (44%) of Likely Democratic Voters told Rasmussen Reports late last month that they would vote for Sanders if he was on the ballot this November, but just 24% said they were more likely to vote for Clinton because of Sanders’ endorsement.


Fifty-five percent (55%) of whites and 52% of other minority voters now think there is a war on police in America, but only 31% of blacks agree. However, 60% of all voters think comments critical of the police made by some politicians make it more dangerous for police officers to do their job.


Democrats are a lot more enthusiastic about Clinton’s plan for so-called “free” college than other Americans are, but all agree that taxpayers will be the ones who pick up the tab.


An ABC News survey this week confirmed what Rasmussen Reports first reported a week ago: Most voters disagree with the FBI’s decision not to seek a felony indictment of Clinton for mishandling classified information while serving as secretary of State.


Is Trump the Tea Party’s revenge?
Posted by Frances Rice at 10:58 AM