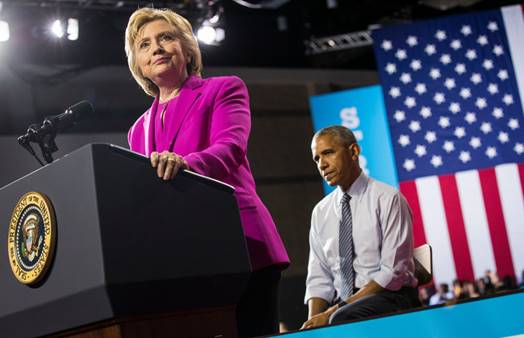 
WASHINGTON — It says a lot about our relationship with Hillary Clinton that she seems well on her way to becoming Madam President because she’s not getting indicted.


If she were still at the State Department, she could be getting fired for being, as the F.B.I. director told Congress, “extremely careless” with top-secret information. Instead, she’s on a glide path to a big promotion.


And that’s the corkscrew way things go with the Clintons, who are staying true to their reputation as the Tom and Daisy Buchanan of American politics. Their vast carelessness drags down everyone around them, but they persevere, and even thrive.


In a mere 11 days, arrogant, selfish actions by the Clintons contaminated three of the purest brands in Washington — Barack Obama, James Comey and Loretta Lynch — and jeopardized the futures of Hillary’s most loyal aides.


It’s quaint, looking back at her appointment as secretary of state, how Obama tried to get Hillary without the shadiness. (Which is what we all want, of course.)


The president and his aides attempted to keep a rein on Clinton’s State Department — refusing to let her bring in her hit man, Sidney Blumenthal.


But in the end, Hillary’s goo got on Obama anyhow. On Tuesday, after Comey managed to make both Democrats and Republicans angry by indicting Clinton politically but not legally, Barry and Hillary flew to Charlotte, N.C., for their first joint campaign appearance.


Obama was left in the awkward position of vouching for Hillary’s “steady judgment” to run an angry, violent, jittery nation on the very day that his F.B.I. director lambasted her errant judgment on circumventing the State Department email system, making it clear that she had been lying to the American public for the last 16 months.


Comey, who was then yanked up to Capitol Hill for a hearing on Thursday, revealed that instead of no emails with classified information, as Hillary had insisted, there were 110, of those turned over to the State Department. Instead of Clinton’s assurances that the server in the basement in Chappaqua had never been breached, Comey said it was possible that hostile actors had hacked Clinton’s email account. Among the emails not given to State, he said at least three contained classified information.


Hillary had already compromised the president, who feels he needs her to cement his legacy. Obama angered F.B.I. agents when he was interviewed on CBS’s “60 Minutes” last fall and undermined the bureau’s investigation by exonerating Hillary before the F.B.I. was done with its work, saying pre-emptively, “This is not a situation in which America’s national security was endangered.”


Hillary willfully put herself above the rules — again — and a president, campaign and party are all left twisting themselves into pretzels defending her.


Obama aimed to have no shadows, but the Clintons operate in shadows.


After Bill Clinton crossed the tarmac in Phoenix to have a long chat with Lynch, the attorney general confessed that the ill-advised meeting had “cast a shadow” over her department’s investigation into his wife and that she would feel constrained to follow the recommendation of the F.B.I.


“I certainly wouldn’t do it again,” Lynch said, admitting it hit her “painfully” that she had made a mistake dancing with the Arkansas devil in the pale moonlight.


The meeting seemed even more suspect a week later, when The Times reported that Hillary might let Lynch stay on in a new Clinton administration.


The fallout from the email scandal has clouded the futures of longtime Hillary aides Cheryl Mills, Huma Abedin and Jake Sullivan, who were also deemed extremely careless by Comey for their handling of classified information. The Times reported that they could face tough questions as they seek security clearances for diplomatic or national security posts. (Not to mention remiss in not pushing back on Clinton about the private server.)


“You’ve got a situation here where the woman who would be in charge of setting national security policy as president has been deemed by the F.B.I. unsuitable to safeguard and handle classified information,” Bill Savarino, a Washington lawyer specializing in security clearances, told the Times.


So many lawyers in this column, so little law.


President Obama is not upset about being pulled into the Clinton Under Toad, to use an old John Irving expression. He thinks Washington is so broken that the next president will need a specific skill set to function, and he thinks Hillary has that.


But what should disturb Obama, who bypassed his own vice president to lay out the red carpet for Hillary, is that the email transgression is not a one off. It’s part of a long pattern of ethical slipping and sliding, obsessive secrecy and paranoia, and collateral damage.


Comey’s verdict that Hillary was “negligent” was met with sighs rather than shock. We know who Hillary and Bill are now. We’ve been held hostage to their predilections and braided intrigues for a long time. (On the Hill, Comey refused to confirm or deny that he’s investigating the Clinton Foundation, with its unseemly tangle of donors and people doing business with State.)


We’re resigned to the Clintons focusing on their viability and disregarding the consequences of their heedless actions on others. They’re always offering a Faustian deal. This year’s election bargain: Put up with our iniquities or get Trump’s short fingers on the nuclear button.


The Clintons work hard but don’t play by the rules. Imagine them in the White House with the benefit of low expectations.
Posted by Frances Rice at 4:26 PM