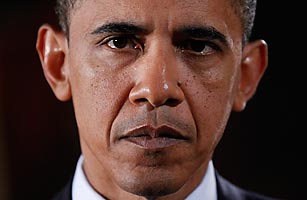 City Journal’s Myron Magnet argues that President Obama has set back race relations in the United States by 50 years and accordingly deserves recognition as America’s worst president. Toward the end of his column Magnet observes:


True to form, Obama went into grievance-mongering mode on July 7, commenting on the killings of Alton Sterling and Philando Castile by cops in Louisiana and Minnesota. He noted that “all of us as Americans should be troubled by these shootings, because these are not isolated incidents. They’re symptomatic of a broader set of racial disparities that exist in our criminal justice system.” And he went on to detail law enforcement’s racial disparities, as if there were not even more stark and troubling racial disparities in lawbreaking. His familiar conclusion: “If you add it all up, the African American and Hispanic population, who make up only 30 percent of the general population, make up more than half of the incarcerated population. Now, these are facts. And when incidents like this occur, there’s a big chunk of our fellow citizenry that feels as if because of the color of their skin, they are not being treated the same. And that hurts.”


Obama’s cause, as it turns out, is represented by the racial arsonists of the Black Lives Matters crowd. Obama therefore counsels the group and speaks on its behalf. Obama took time out in Spain on Saturday to render advice. The White House has posted the text of Obama’s statement and answers to questions; the Washington Examiner extracts relevant in its report:


“Whenever those of us who are concerned about failures of the criminal justice system attack police, you are doing a disservice to the cause,” Obama said in remarks to reporters in Spain, where he is traveling. “Any violence directed at police officers is a reprehensible crime and needs to be prosecuted,” he said.


Even rhetorically, if we paint police with a broad brush, or “say things that are stupid or imprudent,” it risks losing ground for the reform cause, Obama said.


“In a movement like Black Lives Matter, there are always going to be folks who say things that are stupid or imprudent or over-generalized or harsh,” Obama said. “And I don’t think that you can hold well-meaning activists who are doing the right thing, peacefully protesting, responsible for everything that is uttered at a protest site … I would just say that everybody who’s concerned about the issue of police shootings or racial bias in the criminal justice system, that maintaining a truthful and serious and respectful tone is going to help mobilize American society to bring about real change. And that is our ultimate objective.”


With his characteristically perfect timing, coincidentally, Obama declared, “You’re not seeing riots.” Later that day, however, we were seeing riots right here in St. Paul.


In his remarks in Spain Obama decried “the larger, persistent problem of African Americans and Latinos being treated differently in our criminal justice system.” Yet there is no disparate treatment; this is Obama’s big lie. It’s not just Obama’s, of course, but Obama has adopted it as his own and turned it to his own uses. It’s all about “fundamental transformation.”


In her testimony to the Senate Judiciary Committee this past October, Heather Mac Donald made this elementary plea: “[L]et me say that the committee would provide an enormous public service if it could rebut the myth that the criminal justice system is racist.” The same point applies many times over to Obama, but he prefers to stand on the big lie for its many and varied uses.
______________________


Obama and company decline to speak honestly about Dallas 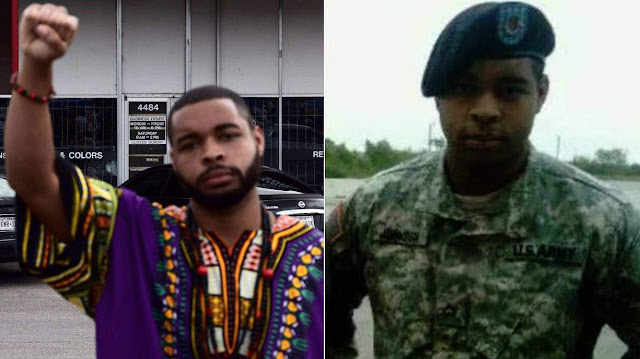 Before he received his just reward, Micah Johnson left no doubt about why he had gone on his killing spree in Dallas. Johnson wanted to kill white people, especially white officers, he told the police officers who were closing in on him.


Clearly, Johnson hated white people. He was driven by racism.


Johnson’s statement wasn’t good enough for President Obama, though. According to Obama, it is “very hard to untangle the motives of this shooter.”


Nonsense. One might discuss the origins of Johnson’s intense hatred for whites and whether mental illness contributed, as Obama seemed to suggest. But Johnson’s motive is clear. It’s as clear as Dylann Roof’s motive for killing blacks in Charleston, South Carolina — a motive no one had trouble untangling.


By making such a foolish statement, Obama loses credibility. He creates the impression that he’s glossing over obvious black racism, which ought to disqualify him from being taken seriously when he talks about race relations, and will disqualify him in the view of many whites. (This may be why the mainstream media doesn’t seem to be reporting Obama’s statement.)


You said there’s no link to a terrorist organization here, but the shooting in Dallas was by any definition terrorism and a hate crime, wasn’t it.


Well, there’s still an investigation being conducted by the Dallas police department and the FBI supported by many resources from the local government and the federal government. So it’s still relatively early.


What does Johnson think will occur in the investigation to show that Johnson didn’t commit a hate crime? Will the “many resources” of the government put the killer back together again so he can take back his acknowledgment that he wanted to kill whites?


Jeh Johnson isn’t stupid and neither is President Obama. They deny the obvious because they are unwilling to speak honestly about race when black racism is involved.


I won’t try to untangle the motives behind this dishonesty. I do know this: racially motivated dishonesty by national leaders won’t improve race relations; it will only make them worse.


Posted on by John Hinderaker
Hundreds of Black Limes Matter rioters shut down Highway 94, a major interstate that connects Minneapolis and St. Paul, for several hours last night. The rioters bombarded police with chunks of concrete, pieces of rebar and other hard objects, injuring 21 police officers. One policeman suffered a broken vertebrae when a concrete block was dropped on his head from above. Around 100 rioters were arrested. 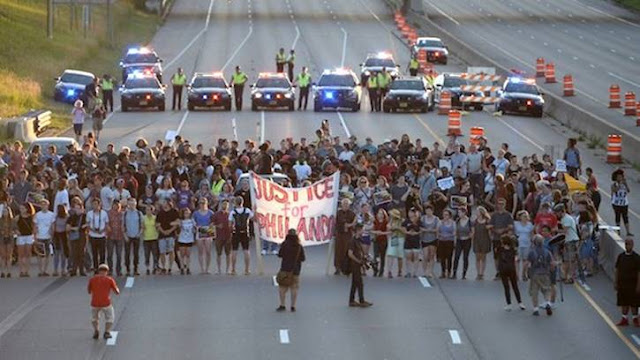 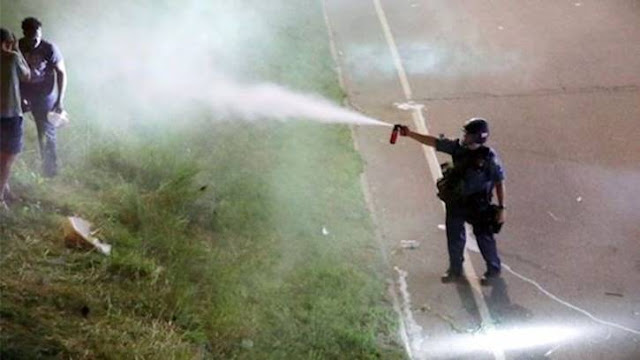 
“This is the first time in my 28 years we have observed this level of violence toward our public servants,” Axtell said. “It’s really a disgrace.”


The chief said the protesters “turned into criminals. I am absolutely disgusted, [and] I am not going to tolerate it.


Let’s hope not. Let’s hope they don’t continue to tolerate the shutting down of major highways, either. 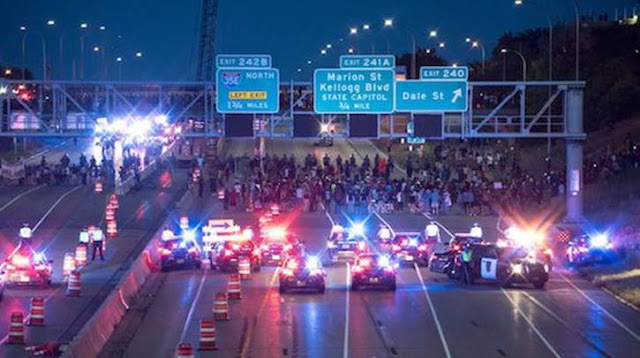 When mass murderer Micah Johnson struck during a Black Lives Matter protest in Dallas, a stark line was drawn between the peaceful protesters–everyone except Johnson–and the murderer. But it doesn’t take long for those lines to be blurred. Many of the hundreds of rioters who closed down Highway 94 were evidently willing to be murderers, as their concrete blocks and rebar could easily have killed one or more policemen. In truth, on the Left there is not a sharp division between the violent and the non-violent, but rather a continuum that runs from demonstrators to protesters to rioters to looters to rock throwers to arsonists to killers. There is no such thing as a political Left without violence.


Rest assured that we will see plenty more violence before the Black Lives Matter movement has served its political purpose and is put to rest.
Posted by Frances Rice at 9:57 AM