Interesting to note how some people, particularly the liberal media, get so upset over the type of language used by President Donald Trump who's trying to protect Americans from the ill effects of illegal immigration.

Did these people show concern when President Bill Clinton who had sex in the Oval also talked tough about illegal immigration?

Why no expressions of outrage when President Barack Obama demeaned America, while supporting illegal immigration and honoring Senator Ted Kennedy who was responsible for the death of a woman?

See the below 2015 article for details.

Also See: "1969 Incident on Chappaquiddick Island" historical entry which explains how shortly after leaving a party on Chappaquiddick Island, Senator Edward “Ted” Kennedy of Massachusetts drives an Oldsmobile off a wooden bridge into a tide-swept pond. Kennedy escaped the submerged car, but his passenger, 28-year-old Mary Jo Kopechne, did not. The senator did not report the fatal car accident for 10 hours.
http://www.history.com/this-day-in-history/incident-on-chappaquiddick-island
_______________________ 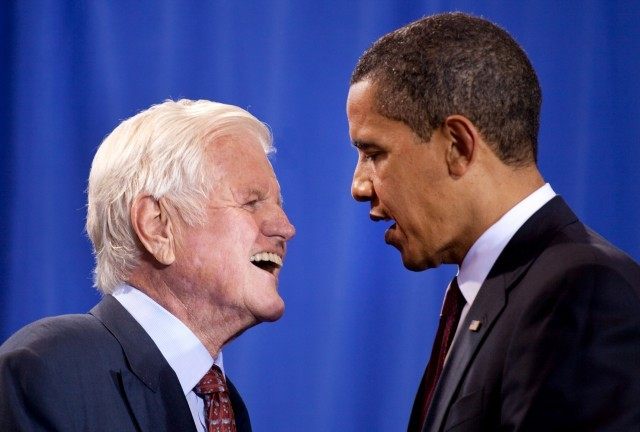 On Monday, President Barack Obama gave an emotional speech commemorating the $79 million replica of the Senate chamber at the Edward M. Kennedy Center in Boston, Massachusetts.

The thrust of Obama’s speech condemned America as an unimaginative, prejudiced, unambitious country whose only hope lies in liberals who selflessly dedicate their lives to leading it out of the darkness.

The replica of the Senate chamber celebrated the “hard, frustrating, never-ending” war progressives wage against America on its behalf, Obama declared.

“We live in a time of such great cynicism about all our institutions. And we are cynical about government and about Washington, most of all. It’s hard for our children to see, in the noisy and too often trivial pursuits of today’s politics, the possibilities of our democracy — our capacity, together, to do big things,” Obama said. “And this place can help change that. It can help light the fire of imagination, plant the seed of noble ambition in the minds of future generations. Imagine a gaggle of school kids clutching tablets, turning classrooms into cloakrooms and hallways into hearing rooms, assigned an issue of the day and the responsibility to solve it.”

Children in America are brought up with a backwards view of the world, Obama said. Their moral universes are small and prejudiced, but progressive governing will open their minds.

“Imagine their moral universe expanding as they hear about the momentous battles waged in that chamber and how they echo throughout today’s society. Great questions of war and peace, the tangled bargains between North and South, federal and state; the original sins of slavery and prejudice; and the unfinished battles for civil rights and opportunity and equality,” said America’s first black president, elected after he promised Americans a “post-racial presidency.”

Obama obliquely referred to Kennedy’s role in pushing his influential political accomplishment: The Immigration and Nationality Act of 1965.
“Towards the end of his life, Ted reflected on how Congress has changed over time. And those who served earlier I think have those same conversations. It’s a more diverse, more accurate reflection of America than it used to be, and that is a grand thing, a great achievement,” Obama said.

In this case, Obama is right: It’s worth reflecting on how much America has changed since 1965, and examine the effects of the legislation Kennedy promoted that brought it about.

“First, our cities will not be flooded with a million immigrants annually. Under the proposed bill, the present level of immigration remains substantially the same…

Secondly, the ethnic mix of this country will not be upset… Contrary to the charges in some quarters, [the bill] will not inundate America with immigrants from any one country or area, or the most populated and deprived nations of Africa and Asia…

In the final analysis, the ethnic pattern of immigration under the proposed measure is not expected to change as sharply as the critics seem to think… The bill will not flood our cities with immigrants. It will not upset the ethnic mix of our society. It will not relax the standards of admission. It will not cause American workers to lose their jobs.”

How have Kennedy’s promises stood up to the passage of time?

Fifty years later, the Census bureau predicts that the foreign-born population is set to increase 85 percent by 2060, where Hispanics will see their number grow by the tens of millions and native-born whites are the only group expected to decline in both absolute numbers and fertility rates.

Fifty years later, the U.S. places no numerical limit on the immediate family members of aliens admitted into the country. Despite holding only five percent of the world’s population, the U.S. is the most popular destination in the world for immigrants, attracting 20 percent of all the world’s migrants.

Fifty years later, the U.S. allows some 11 to 20 million illegal aliens to squat on its territory while allowing over one million more each year to legally enter the country.

Fifty years later, Central American governments are propped up by $12.2 billion in remittances taken out of the American economy by foreign workers the U.S. refuses to tax or expel.

Fifty years later, Central American migrants, thousands of whom are indigenous Mayans who can’t write or speak even Spanish, storm the border in endless waves while federal agents fly them to nearly every state in the union without so much as a photo ID — while American citizens are fondled and scanned by the very same TSA agents.

Fifty years later, we have Rep. Luis Gutierrez threatening Americans in Spanish, vowing they will be made to suffer “electoral punishment” for resisting a path to citizenship for illegal aliens, declaring his one loyalty is the not to the United States but to foreigners breaking immigration laws, and printing “Do Not Deport Me” cards for those same individuals.

Fifty years later, Americans are led by a president who illegally grants deportation stays for five million illegals that will allow them to get Social Security numbers (and therefore the ability to vote in U.S. elections) along with $35,000 per head in tax benefit freebiesforcibly taken Americans who managed to hold onto their jobs, who joyfully predicts that a “President Rodriguez” will leave the borders wide open for future tsunamis of immigrants.

Fifty years later, illegal alien Cinthya Garcia-Cisneros received no jail time after she slaughtered two Oregon children playing in a leaf pile by running them over, fleeing the scene, having her car taken to a car wash to scrub off the gore, and lying to police about her hit-and-run.

Fifty years later, illegal alien Ramiro Ajualip is charged with savagely raping and sodomizing a 10-year-old Alabama girl while her parents left her alone in the presence of their “family friend.”

Fifty years later, Vanessa Pham’s family carries on without their daughter, who died after the PCP-addled illegal alien Julio Blanco Garcia stabbed her more than a dozen times after she gave him and his toddler a ride to a hospital.

Fifty years later, American marathon runners walk on prosthetic limbs and suffer through countless painful surgeries after Muslim Chechen immigrants Tamerlane and Dzhokhar Tsarnaev were granted asylum so they could plot against the country that bent over backwards to accommodate them.

Fifty years later in Boston, where English colonists sparked what would become the American Revolution, nearly half of all children have at least one foreign-born parent. “Learning English isn’t so easy” thanks to incredible demand for adult English-language classes, reports Boston.com. “Boston can’t benefit from its diversity if everyone can’t communicate.” Taxpayers are on the hook for $500,000 to teach just 200 students, yet total enrollment in these classes stands at 3,400 with another 4,000 immigrants on wait lists.

The costs Americans pay in lowered wages, strained social safety nets, their children’s blood, their declining quality of life, the chaos of sharing space with an ever-swelling criminal population aided and abetted by the nation’s elite, the berating Americans of every stripe endure when they dare ask their country merely be preserved — that’s the real legacy of Ted Kennedy.

That the ruling class celebrates his legacy indicates that they don’t plan to stop transforming America any time soon.

http://www.breitbart.com/big-government/2015/03/30/ted-kennedys-real-legacy-50-years-of-ruinous-immigration-law/
Posted by Frances Rice at 11:31 AM