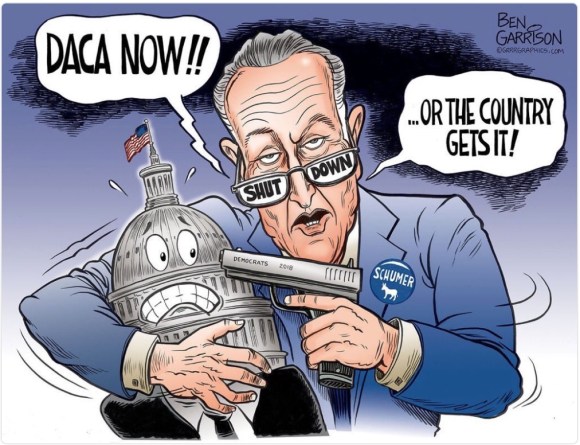 The White House revealed a proposal to extend legal status and a path for citizenship for 1.8 million illegal immigrants brought to the country as children in exchange for $25 billion in funding for the wall, an end to chain migration across the board, and an end to the visa lottery program.

I have offered DACA a wonderful deal, including a doubling in the number of recipients & a twelve year pathway to citizenship, for two reasons: (1) Because the Republicans want to fix a long time terrible problem. (2) To show that Democrats do not want to solve DACA, only use it!
----

Democrats are not interested in Border Safety & Security or in the funding and rebuilding of our Military. They are only interested in Obstruction!

The bill’s framework would apply to the roughly 690,000 illegal immigrants who registered for the DACA program started by former President Barack Obama as well as illegal immigrants who did not apply. A senior administration official told reporters that the 1.8 million number would be restricted by minor adjustments to timeframes and dates of entry issues.

“The argument is by some people in Congress is that there is another 690,000 roughly that never got around to registering but fall into the general category, age, and all the rest of it,” the official said. “Those combined come to 1.8 million.”

The path to citizenship would require a 10-12 year period where recipients would be required to demonstrate good behavior, work and education requirements, and good moral character.

A senior White House official described the plan as an “extraordinarily generous concession” with Democrats but made several demands considered non-starters by members of Congress supporting amnesty.

The White House said that it intended to send the framework to Senate Majority Mitch McConnell, who promised Democrats a vote on the Senate floor by February 8.

The framework includes a $25 billion lump sum “trust fund” for a border security “wall system” for not only the Southern border but major security investments on the Northern border as well.

It also includes sweeping limitations for chain migration — limiting family immigration sponsorships to only spouses and minor children — not for parents or extended family members.

The new migration limitations would apply to all immigrants in the United States, not just the newly legalized 1.8 million.

The bill framework was described as an effort to show exactly what the president wanted in a bill after open borders advocates complained that they had no idea where the president stood in their negotiations.

The proposal would also end the visa lottery program and reallocate them towards fulfilling the skills-based visa backlog.

The official noted that the current legislation was “galaxies apart” from what Senate Minority Leader Chuck Schumer discussed with Trump over lunch before the government shutdown, but felt that it was a plan that could get 60 votes in the Senate.

IMMIGRATION | CHAIN MIGRATION BY THE NUMBERS 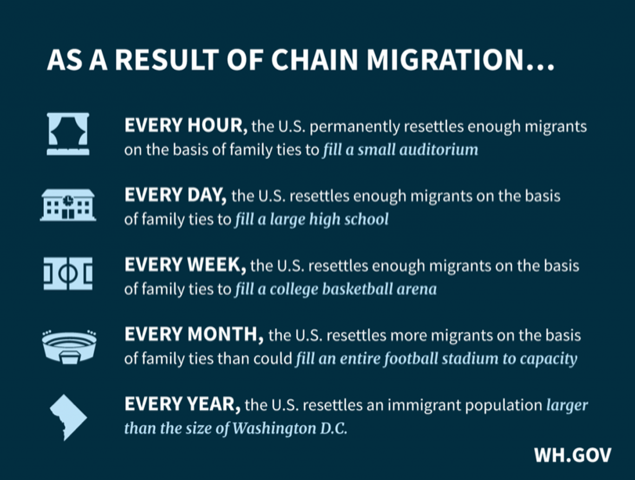 To understand the scale of the challenge that Chain Migration poses to those in charge of our nation’s checks and screening processes, it is worth providing some numerical context.

President Trump has repeatedly stated that Congress must end Chain Migration as part of any legislative deal on DACA.

Under our current Chain Migration system, newcomers are admitted to the United States based on family ties and distant relations, as opposed to a merit-based system that selects newcomers based on economic and national security criteria.

The large influx of predominantly low-skilled migrants has had substantial fiscal and national security consequences.

To understand the scale of the challenge that Chain Migration poses to those in charge of our nation’s checks and screening processes, it is worth providing some numerical context.

BORDER SECURITY: Securing the Southern and Northern border of the United States takes a combination of physical infrastructure, technology, personnel, resources, authorities, and the ability to close legal loopholes that are exploited by smugglers, traffickers, cartels, criminals and terrorists.

ELIMINATE LOTTERY AND REPURPOSE VISAS: The Visa Lottery selects individuals at random to come to the United States without consideration of skills, merit or public safety.