Schumer Shutdown: Senate Democrats Brag About Having Votes to Shut Down Government via Filibuster 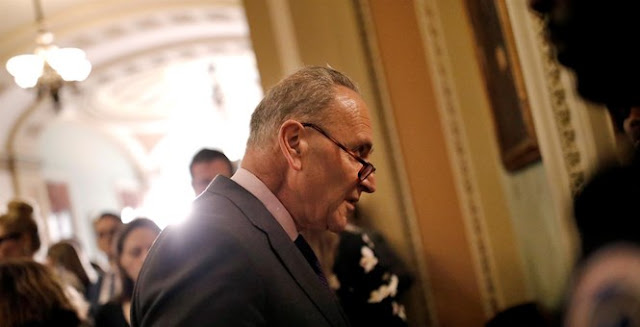 There was a time, in the very recent past, when Democrats insisted that a partial government shutdown would usher in the apocalypse -- overwrought framing they promiscuously apply to numerous political debates -- and any attempt to extract policy concessions during a shutdown showdown was extreme recklessness.

There was also a time, in the very recent past, when Democrats demanded an extension of CHIP, a healthcare program for children (proposals to do just that they voted against, over funding mechanism disagreements).

More than a dozen upper chamber Democrats also lined up to vote with Republicans against the implementation of Obamacare's harmful, job-killing and innovation-stifling medical device tax.

Last night, House Republicans overcame internal divisions and passed a government funding bill that would keep the lights on for another month, would allocate money to keep CHIP running for six years, and would further delay a handful of unpopular Obamacare taxes.

Nearly every lower chamber Democrat voted no.  Or as Democrats would likely put it if the roles were reversed, nearly every House Democrat voted against the children and the troops, and in favor of shutdown chaos.  Monsters.

Attention now shifts to the Senate, where Democrats are boasting to reporters that they've marshaled the requisite votes to block GOP attempts to keep the federal government open, via a filibuster.

Even if every Senate Republican voted for the House-passed plan (Mitch McConnell's caucus has a few members who've vowed to vote no), 60 votes are required to overcome a potential minority filibuster.

And Democrats are stating, quite openly, that they're ready to filibuster the GOP spending bill and force a shutdown unless they get their way on immigration.

Chuck and Nancy are banking on two dynamics here: First, that the public will be inclined to blame any shutdown on the party that is intrinsically more hostile toward government (not a bad bet), and second, that the press will help them blame Republicans -- or at least muddy the waters (also a decent wager).
But the dynamics are so clear on this one that the media has had less room for obfuscation.  I'm not sure Democrats were counting on headlines like this:
_____________

BREAKING: Senior Democratic aide tells NBC News that Democrats have enough votes to block the spending bill in the Senate and prevent Republicans from keeping the government up and running
______________

It's hard to spin that as anything other than a 'Schumer Shutdown,' as Republicans are aptly labeling it on social media.  Why is the Senate Minority Leader promising to kill a bill that would keep the government open and give years-long stability to a healthcare program he believes is vital?  Because of pressure from his left-wing base over DACA.

Put bluntly, Senate Democrats are prepared to shut down the government on behalf of illegal immigrants.  I've made clear that I favor a DREAM Act compromise and support ongoing negotiations to that end (though initial drafts of a potential agreement are far too weak on border security and enforcement).

But the DACA deadline is about a month-and-a-half away, with good-faith bipartisan talks still underway.  Needlessly tying a specific DREAM Act outcome to keeping the government funded, especially while eschewing a CHIP extension, looks foolish and unreasonable.  But it's what the base wants. Thus, whiplash.

A senior aide to House Speaker Paul Ryan laid things out clearly and effectively in a tweet storm last evening.

But that's what Republicans did under Obama, critics will object.  Yes, although the GOP had at least won back some power on the promise of stopping the Obama agenda by that point, which they were exerting.  Either way, it didn't work out especially well for the party, even if it didn't end up hurting them in the following national election.

And Democrats condemned those tactics in the most hyperbolic of terms, blasting the GOP as unconscionably irresponsible.

Now Democrats find themselves out of power, so they're eagerly "taking hostages."  It seems as though political parties radically alter their own positions and rhetoric when their electoral fates change.  What a surprise.  I'll leave you with my analysis from this morning on the Schumer Shutdown, and why the Democrats' spin is weak.

Keep the government open, and keep the DACA talks open, too.  The latter an important goal, but there's still time to address and achieve it.  Two issues, two tracks.  By the way, if Democrats do force a (partial) shutdown, I'll highlight this thought experiment from last year.

How they could play it: "We regret that Democrats have decided to shut down the government on behalf of illegal immigrants whose ordeal we also support resolving.  This is unwise, in our view, and we are eager to reopen the government as soon as possible.  But as long as Democrats insist that it remain closed, the Trump administration -- unlike previous Democratic administrations -- will do everything in its power to make this partial government shutdown as unobtrusive and painless as possible for the American people."

By the way, how can someone like Dianne Feinstein say this, then vote against a reasonable CR?