6 Other Times People Broke Into the U.S. Capitol 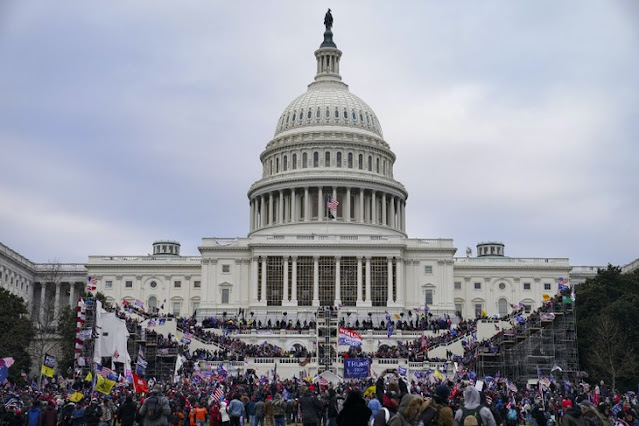 On Wednesday, protesters with a pro-Trump “Stop the Steal” rally broke through Capitol Police and breached the premises of the U.S. Capitol Building. Some of them even made it to the Capitol Rotunda and the Senate Floor. The U.S. Capitol has survived many invasions in the past, and it will endure through this one, as well.

Not long after construction ended on the U.S. Capitol’s two wings in 1811, the British Army invaded Washington, D.C. during the War of 1812. British troops partially burned the Capitol on August 24, 1814. Reconstruction took about four years.

On July 2, 1915, before the U.S. entered World War I, German professor Eric Muenter exploded a bomb in the reception room of the U.S. Senate, aiming to stop American support of the Allies. The next morning, Muenter tried to assassinate J.P. Morgan, Jr., son of the financier, whose company served as Great Britain’s principal U.S. purchasing agent for munitions. He committed suicide a few days later.

On March 1, 1954, four Puerto Rican nationalists shot 30 rounds from semi-automatic pistols from the Ladies’ Gallery, a balcony for visitors, of the House of Representatives chamber in the Capitol. The shooters aimed to advocate for Puerto Rican independence from the U.S. They unfurled a Puerto Rican flag and began shooting at representatives while the House debated an immigration bill.

The shooters wounded five representatives, but all of them recovered. They were convicted in federal court and given long sentences, effectively life in prison. In 1978 and 1979, President Jimmy Carter pardoned them, and they returned to Puerto Rico. Analysts claimed Carter pardoned the terrorists in exchange for Fidel Castro’s release of several American CIA agents being held in Cuba, although the federal government denied this.

On March 1, 1971, the radical left domestic terror group the Weather Underground exploded a bomb on the ground floor of the U.S. Capitol. They exploded the bomb as a demonstration against U.S. involvement in Laos. President Richard Nixon denounced the bombing as a “shocking act of violence that will outrage all Americans.”

On November 7, 1983 the leftist terrorist group Armed Resistance Unit took responsibility for detonating a bomb in the lobby outside the office of Senate Minority Leader Robert Byrd. The terrorists claimed they intended to protest the invasion of Grenada. After four and a half years of investigation, federal agents arrested six terrorists and charged them with the bombings of the Capitol, Fort McNair, and the Washington Navy Yard.

In December 1990, a federal judge sentenced two of the terrorists to lengthy prison sentences, while the court dropped charges against three co-defendants, who already served prison sentences for related crimes. On the day he left office, President Bill Clinton commuted the sentence of Linda Evans, one of the bombers.

6. The murder of two police officers

On July 24, 1998, Russell Eugene Weston, Jr. burst into the Capitol and opened fire, killing two Capitol Police officers, Jacob Chestnut and John Gibson. Weston’s motives remain unknown and he faced murder charges for the shootings. However, he was committed in a mental institution with paranoid schizophrenia.

It is ominous that Trump supporters would make this list. Attacks on the U.S. Capitol have not helped the causes of those who attack the building for political reasons. While the Trump supporters who stormed the Capitol may not have meant to do any physical harm or to threaten the lives of anyone, it is still a shameful mark on American history that protesters breached the seat of Congress.