By Joy Pullmann | The Federalist 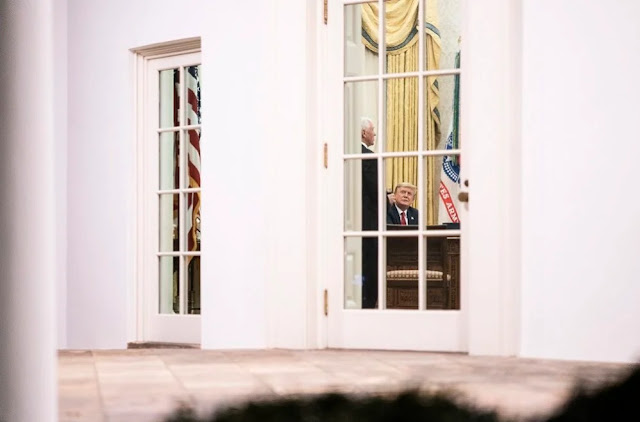 It appears that global oligarchs have decided to not only collude with China's totalitarian control over its society, but to export it to formerly free nations such as the United States.

We appear to be at the beginning of a massive crackdown on people who have supported Donald Trump, led by big tech and big media. These entities are making Trump into an example of their power to frighten the half of America that supported him in November. We cannot allow them to intimidate us.

But they sure are trying, and on some, they will succeed. They are using the excuse of an unrepresentative group of fools criminally ransacking U.S. Capitol offices with a lighter touch than many of this summer’s often unpunished Black Lives Matter and Antifa rioters. Remember: Some of those rioters got away with murder, attacking public buildings including in state capitols, arson, and stopping ambulances from bringing wounded police into hospitals for treatment. They were bailed out with the help of the incoming Democrat vice president.

Now we are being told that an unorganized group of stupid people knocking down doors and throwing Nancy Pelosi’s desk papers on the floor are “seditionists” aiming for the “overthrow of the U.S. government”? Please. That’s giving them credit that they don’t at all deserve.

But they have provided a useful pretext for much darker strategic actions from much better-funded and better-coordinated powers. On the assumption with an excellent track record that Republicans have lost all power and wouldn’t intelligently use any power they have anyway, Twitter has banned Trump permanently and suspended Mike Flynn. Facebook, Instagram, and Snapchat also banned Trump.

Google and Apple banned the Twitter alternative Parler from their app stores, claiming it’s because right-wing agitators have used it to organize, although the same is true of left-wing agitators, mass-murdering foreign dictators, and apolitical criminals on Twitter. Amazon defenestrated Parler from its servers Sunday.

The purge wasn’t at all limited to Trump himself. It’s also pursuing his supporters. YouTube banned all videos discussing voter fraud. Reddit shut down its Donald Trump subreddit. On Jan. 8, Facebook shut down the Walkaway campaign that shared the stories of people who left the Democratic Party to vote for Trump, and banned every one of the group’s owners from using Facebook. The publisher of a forthcoming book by Sen. Josh Hawley cut ties with him over his support for proving to the American people that our elections are free and fair.

The National Association of Realtors “has revised its professional ethics code to ban ‘hate speech and harassing speech’ by its 1.4 million members,” both on the job and off. To them, hate speech includes basic conservative ideas, not at all actually racist or otherwise indefensible words. “The sweeping prohibition applies to association members 24/7, covering all communication, private and professional, written and spoken, online and off. Punishment could top out at a maximum fine of $15,000 and expulsion from the organization.”

Police departments across the country have opened “probes” into whether any of their employees attended the Trump protest on Jan. 6. They’re not at all alone. Employers have begun firing people who merely attended the rally of hundreds of thousands, out of which a minority broke the law.

The label of an indie musician terminated their relationship because he posted that he had “peacefully” attended the Trump protest. A Wall Street Journal article documents the firing of a lawyer for an insurance company who posted on Instagram that he had attended “peacefully.”

Other such punishments for mere attendees at the Trump rally were reported and egged on on Twitter, such as this one: 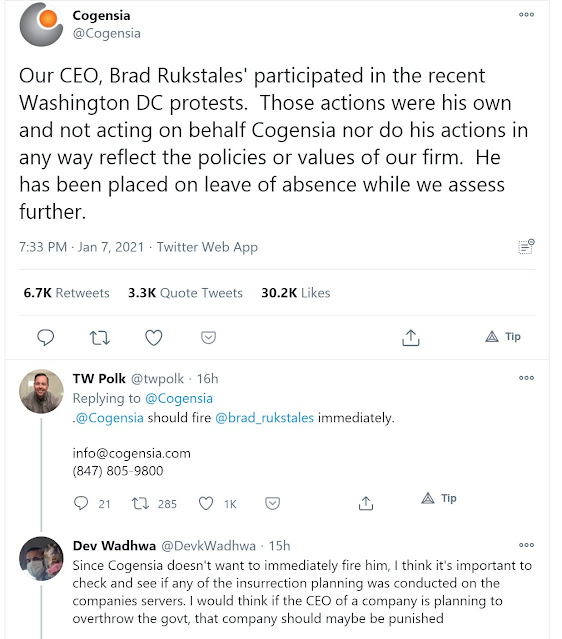 The notorious Never Trump group The Lincoln Project is launching a pressure campaign to ensure more such firings to purge leftists’ political opponents from all aspects of public and private life, in the name of “America.” Here’s Steve Schmidt, a Lincoln Project cofounder, using Twitter to do what it does best: organize and aim demonic flying Twitter monkeys: 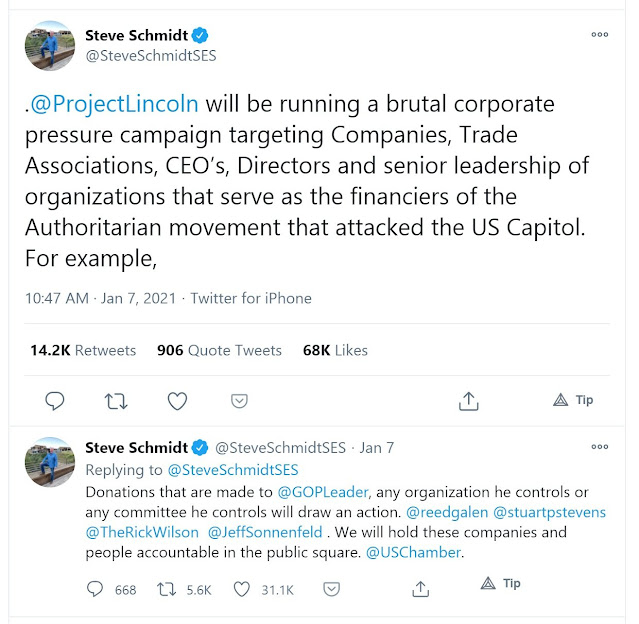 Well-funded groups like The Lincoln Project, Southern Poverty Law Center, and other leftist pressure campaigns are dedicated to earning money and status by destroying the lives of anyone who disagrees with their politics. It’s excellent business. Schmidt has released tweets outlining many of his group’s planned actions, a terrifying blueprint of the cultural revolution mindset ascendant among America’s political left, who just seized control of every branch of the federal government: 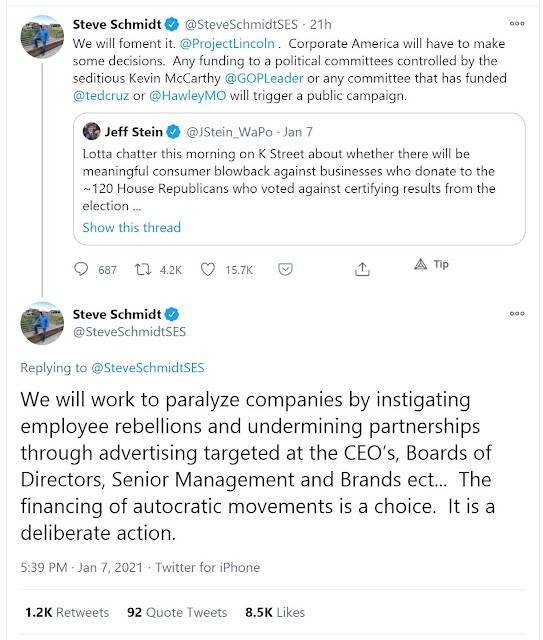 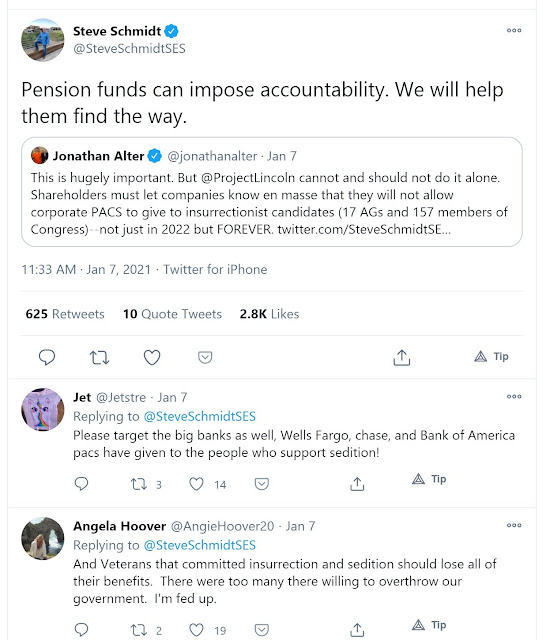 Already this creepy lust for punishment has Reddit users revealing their plans to turn family members into the FBI for attending the Jan. 6 protest, regardless of whether these family members committed any crimes or merely, like the vast majority of attendees, walked peacefully in D.C. streets.

A Jan. 8 blog post from Mozilla Chairwoman Mitchell Baker declared tech companies need to do “more” than deplatforming people like Trump, including “Turn on by default the tools to amplify factual voices over disinformation” like those Twitter and Facebook used to interfere in the 2020 election.

You had better believe there are discussions among credit card companies, banks, and other financial institutions about punishing organizations they view as opposing leftist political views. In December, for example, a so-far unnamed credit card processing company refused to process donations to the American Family Association because it is socially conservative. Previously, big banks refused to bank for legal gun manufacturers after pressure from leftist activists.

This is the kind of power the left holds over all the institutions that make life possible for Americans, and they have already revealed they are not afraid to flex that power against the left’s chosen enemies. All of this is merely the next step in years of campaigns to use economic pressure to control public policy.

The watershed moment was the 2015 Religious Freedom Restoration Act attempt in Indiana that was turned into LGBT legal preferences because big corporations decided to override the state’s voters, and then-Gov. Mike Pence and state Republicans turned tail and ran. When a pressure tactic works, it will be increased. That’s precisely what has happened in the past five years, including the most recent information ops on the 2020 election.

We all saw Big Tech and Big Media collude to hide information damaging to the left and amplify information and narratives damaging to the right. Corporations are now wielding supragovernmental power untethered by even the pretense of constitutional legitimacy, and our government seems entirely powerless to stop them.

This all moves us closer to a nongovernmental social credit system like that employed by Communist China, which economically and socially punishes people for “wrongthink.” It appears that global oligarchs have decided to not only collude with China’s totalitarian control over its society, but to export that social control to formerly free nations such as the United States.

Consider these companies’ vocal support for and use of Chinese slave labor in their supply chains versus their nuclear retaliation against Trump saying words they don’t like. Then consider that they still distribute propaganda from foreign leaders who fomented global instability by mismanaging COVID-19 then lying about it (China), fund terrorism (Iran and Russia), and confine millions of minorities in slave camps (China).

These companies give mass murderers, global villains, and slave traders a platform while denying one to their arch-enemy whose worst crime is saying mean, imprecise, false, and stupid words while not being a Democrat. So of course Chinese government censors cheered them on.

This is a world that one of the leading lights of leftism, The New York Times and columnist Tom Friedman, welcome with open arms. It silences all those pesky dissidents who just get in the way of enlightened policymaking like the Green New Deal. If this bright future requires ignoring a few million enslaved Uighurs, well, omelets require eggs, you know. Anything for the Party.

This week’s escalation of totalitarian speech controls and witch hunts — Are you now or have you ever been a supporter of Donald Trump? — is terrifying, and not just because of the lack of defenses against leftists’ demonstrated control of information and funding. If they can do this to the president of the United States, who can’t these corporations do it to?

If President Trump had actually called for rioters to stop and “go home in peace,” and firmly denounced violent lawbreaking while acknowledging the 99.9999999 percent of his supporters who are peaceful and lawful, but these corporations told the world he was instead “inciting violence” and encouraging “sedition,” how would we ever know the truth?

If they choose to lie to us, to lie about one political party, to lie about events they use to impose draconian speech and social controls, and to ban us from ever sharing information that proves or even simply suggests they lied or aren’t telling the whole story, how would we ever know it?

However long it takes, whatever ethical methods it takes, their power must be broken. You and I can start by not believing a word they say. Next, we need to start securing and expanding our ability to find and proclaim the truth, for as long and as loudly as we can.

Joy Pullmann is executive editor of The Federalist, a happy wife, and the mother of six children. Her newest ebook is "The Family Read-Aloud Advent Calendar," and her bestselling ebook is "Classic Books for Young Children." A Hillsdale College honors graduate, @JoyPullmann is also the author of "The Education Invasion: How Common Core Fights Parents for Control of American Kids," from Encounter Books.