Biden Kills Thousands of Jobs, Hurts Environment, and Harms Relations With a Close Ally on His First Day in Office 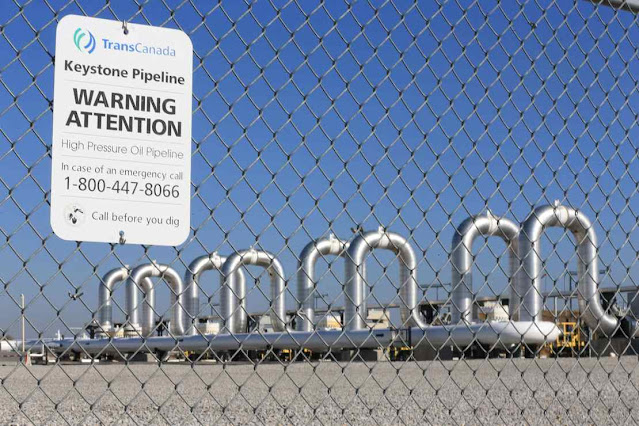 Joe Biden used an executive order to kill the Keystone XL pipeline permit on his first day as president. The move, which was expected because Biden said he would do it, drew sharp criticism from Texas, where the pipeline would have ended in the Houston area.

The “working class party” is just fine with killing thousands of union jobs.

Anything to appease the radical left and their pseudo-environmentalism.

Michelle Michot Foss, a Ph.D. fellow in energy, minerals, and materials at Rice University’s Baker Institute said the extension would have benefitted the Houston region.

“This project is one of those great security blankets. We have that delivery of crude from Canada. It comes right into the refining complex here, which provides roughly 30 to 40% of U.S. fuel supply and would help to keep prices affordable as everybody engages in economic recovery,” said Foss.

Sen. John Cornyn (R-Texas) also inveighed against the move. Unions and most Democrats — about 62% — opposed the cancelation. Canada’s Prime Minister Justin Trudeau also weighed in against the move. Canada is now said to be considering some type of sanction against the United States. Biden’s move affects workers in both countries; it kills about 12,000 jobs in the United States and another 2,000 in Canada as both countries are still reeling from the COVID pandemic’s destruction of jobs.

It’s how a Democrat president treats not only an ally, but American workers as well.

Canceling the Keystone XL also hurts the environment. The pipeline would have moved between 800,000 and 830,000 barrels of oil per day safely, off our roads and rails, from where it’s produced to where it can be refined. That was to be Texas, which leads the world in the clean and safe refining of oil into products the modern economy depends on every single day. So some of the jobs lost were in Texas, about which Biden will not care, as Texas did not vote for him.

With the pipeline canceled, Canada will find other customers for its oil. That’s likely to be China and India, two of the world’s fastest-growing and most energy-hungry economies. Instead of being transported safely via the Keystone XL pipeline, the oil will be transported by trucks and ships — both of which emit far more gunk into the atmosphere than pipelines, and both of which are far more prone to accidents and spills. It’s likely to be refined outside the United States, where standards do not match U.S. EPA standards.

Joe Biden killed thousands of jobs, hurt relations with a close ally, and hurt the environment on his first day in the job, while also violating his promise to put science first.

Bryan Preston served as chief of staff to Texas Railroad Commissioner Ryan Sitton. The Texas Railroad Commission regulates oil and gas production in the Lone Star State, which is the nation’s top energy-producing state. He is the author of Hubble’s Revelations: The Amazing Time Machine and Its Most Important Discoveries. He’s a producer, veteran, author, and Texan.