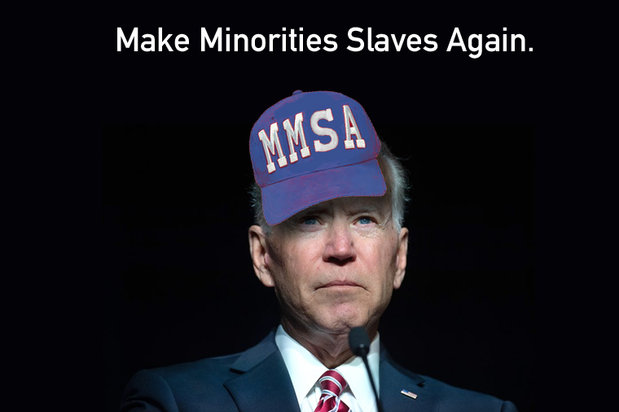 Hours after being sworn in as the 46th President, Joe Biden signed several Executive Orders that are keeping with the Democrats' long history of destroying the lives of minorities.

There is no doubt that the propaganda media, well versed in re-writing the sorted history of the Democrat Party and slavery, will spin the realities of Biden's EO's to fraudulently portray them as civil rights milestones.

So while the country will be subjected to one lie after another by a corrupt media concealing the real anti-minority legacy of Democrats, we thought an honest look at the actual history would be useful.

Founded in 1829, the Democrat Party was steadfastly in favor of slavery. Established in 1854, the Republican Party, the anti-slavery party, wanted to stop slavery from moving into the west.

In 1857, seven of the Supreme Court's nine justices, who were Democrats, voted that the slaves were not citizens but were considered property. In April 1861, Democrats attacked Fort Sumter in South Carolina and commenced the bloodiest war on American soil to keep black slaves in chains.

Two hundred fifty-eight thousand Democrats sacrificed their lives to keep slaves of people who didn't look like they did.

At the same time, three hundred sixty thousand Republicans were killed so that people would be set free from bondage. Yet, when the smoke cleared, those who were set free chose to side with their former slave masters and were transformed into economic slaves.

The road to economic slavery is saturated with numerous examples of Democrats destroying many generations of African Americans. The Democrats organized the Ku Klux Klan that terrorized many black families in the south. Today, under the false and misleading name of "Black Lives Matter," the Klan is alive and well, keeping African Americans relying on government handouts and fearing the wrong people.

Americas' history reveals how the 13th Amendment, abolishing slavery, passed in 1865 with 100% Republican support but only 23% Democrat support in congress.

History clearly shows that the Democrat Party, along with corrupt black leaders and many corrupt propaganda media outlets, perpetuates a lie when they say the Democrat Party has always been the black community's champion.

Booker T. Washington, a black educator, and author who advised U.S. Presidents, wrote in his 1911 book My Larger Education: - There is another class of colored people who make a business of keeping the troubles, the wrongs, and the hardships of the Negro race before the public. Having learned that they are able to make a living out of their troubles, they have grown into the settled habit of advertising their wrongs ‒ partly because they want sympathy and partly because it pays. Some of these people do not want the Negro to lose his grievances, because they do not want to lose their jobs.

According to a New York Times article, median family income for black Americans had declined by 10.9 percent during the Obama administration. And according to a Real Clear Politics report, the poverty rate for blacks under Obama was 25.8 percent, and among black, male, high school dropouts, PBS' Paul Salmon reports, the unemployment rate was 95 percent.

In contrast, according to an October 2020 Wall Street Journal article, "During Trump's first three years in office, median household incomes grew, inequality diminished, and the poverty rate among Black people fell below 20% for the first time in post-World War II records. The unemployment rate among Black people went under 6% for the first time in records going back to 1972.

Yet, by following the lies of the fake media and corrupt civic leaders, African Americans continue to vote for the party that proceeds to destroy their families and futures. Victimization thinking leads to victimization living.

Now in office, Biden has ended the national emergency that Trump declared on the border in February 2018. This act has stopped the construction of the southern border wall. The caravans of hundreds of thousands of illegal aliens from every country in South America and worldwide will be arriving shortly.

Along with a 100-day moratorium on deportations, Biden has also revoked Trump's executive order, which declared that eleven million illegal aliens are priorities for deportation.

What Democrats describe as a benefit is usually a curse to minorities. According to the Congressional Budget Office, by President Biden increasing the federal per hour minimum wage to $15, an estimated 1.3 million jobs will be lost. Another crime against minorities as they will be the ones most likely to be hurt.

In a few short months, unemployment for minorities will skyrocket, and the murder rates in the inner cities will soar. Mostly in Democrat-run cities.

The propaganda media will soon regularly fill the air with how wonderful the Democrats are for minorities while the poverty and murder rates are manipulated or hidden.

History clearly shows a more immoral truth. It would be wise for those in the minority community that manage to endure in the times ahead to remember which party visited this plague upon them when it comes time for future elections. 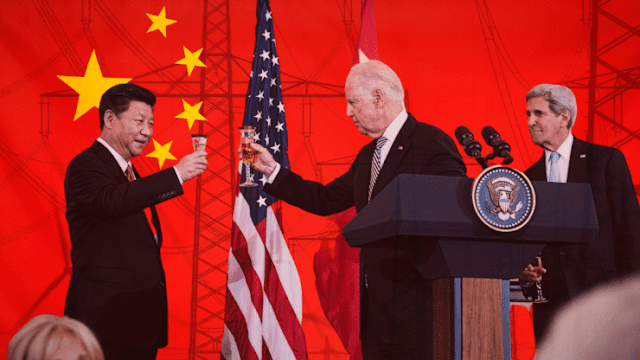 Biden was off to a great start in his first 24 hours. His executive orders should raise costs, reduce energy independence, anger two key allies, cut jobs, strengthen unions, materially increase regulations, raise gas prices, and increase inflation even more quickly than many thought, and just to top it off he infuriated the Catholic Bishops .

In addition, his firings at NLRB and CFPB will result in massive new regulations and fines on innocent companies. And he is just getting going, and you thought Trump was the best at upsetting people.

Stopping the pipeline has reduced good paying union jobs by many thousands, especially if you count jobs at steel companies producing the pipe, collateral jobs to support the construction, and those at suppliers to steel plants. Canada is furious for the job losses there, and they claim the order violates the USMCA, and they plan to sue. States involved are angry because it costs them substantial tax revenue.

Gas prices will eventually rise with less supply of oil when combined with the order shutting drilling on federal land.

The truth about the Paris accord, and carbon, is that, according to the WSJ a few days ago, the US under Trump, lead the world in carbon emission reduction which is now 25% below 2005 levels before Covid, and China and India, the two worst polluters, have no obligations under the Paris agreement to do anything meaningful until 2030.

China and Germany are building more coal plants, while the US has been decommissioning most of them. Under the accord the US is obligated to increase regulations, and no other signatory is complying. The US is also obligated to fund efforts in less developed countries where the US taxpayer money will go to corrupt governments. In the US, the private sector, under current law, has aggressively reduced emissions on its own.

The order stopping fracking on federal land will reduce production of gas further, and raise prices at the pump, hurting low income workers, and cost good paying jobs in the oil fields. It will also mean potential shortages of gas for utilities and for home heating.  25% of oil production is on federal land. It also reduces energy independence which creates very bad geopolitical issues. When gas prices rise, so then do food prices, and all other prices due to higher transport costs. Low income people get hurt.

He has mandated that schools must allow transgenders to compete in sports with real girls. Where that has been tried it has led to unfair competition and substantial anger by real female athletes.

Firing the general counsel of the NLRB, which may have been illegal and has not been done since 1947, will lead to major new regulations on companies that will raise costs and create union problems. It will raise costs and potentially upset the entire franchise arrangements by making franchisors liable to franchisee workers once the NLRB has majority Dems and the new lawyer. It is also likely to upset the entire independent contractor relationship that voters in CA just voted down changing.

There are new rules mandating emergency paid leave. Costs up.

There are new rules strengthening government unions which will lead to more costly government operations.

Stopping the wall defaults on $3 billion of signed contracts. One estimate is it will cost $700 million, or more, to get out of those, and no more wall.

Border patrol said the ending of the wall will just lead to less ability to stop drugs and criminals and masses of illegals into the US. The cartels have moved operations to Tucson area where there is no wall.

The caravans have been forming up again feeding money to the cartels who run them.  Mexico has apparently said -hold on we don’t want all these migrants coming through Mexico. So now he has already managed to piss off Canada and Mexico in 24 hours.

The wall construction also meant a lot of very good paying jobs. Deportations have been stopped, so now Texas is going to sue, and ICE is stuck with deportees to be housed. They will have to spend a lot to build new detention centers to process and hold the tens of thousands that will be arriving now that the border is opening to all.

The flood of illegals will hurt low income workers who are the ones most harmed by Covid. The sex traffickers and cartels are thrilled. Along with that is the lifting of the travel ban on 7 Muslim countries that helped us keep the US safer from a terror attack.

Nobody ever said Biden had any smarts. What he is doing is a left wing assault on cost controls, and efficient operations for companies.  One result, profits will be reduced over time, and the stock market will decline over time. Good going Joe. You are following right in line with Obama, and the result will be the same- a slow economy once all the new regulations take hold and taxes increase.

Then we have the $15 minimum wage that should cost at least 500,000 low income jobs according to the CBO. It will also put numerous small businesses out of business. One of the executive orders just signed requires all federal contractors to pay at least $15 per hour. Up go costs for any federal work or projects. More deficit, and a base from which private payrolls will rise.

The Democrats who have never run a company seem not to realize how prices are set based on cost of production. Add on the $2000 x 4 for the average family, plus $400 a week, plus 15% increase in food stamps, prohibition on eviction and foreclosure, and on student loan payments, and why go back to work. Good work Joe in building the recovery by eliminating jobs and disincentivizing going back to work.

It is considered by many to be unlikely there will be another $1.9 trillion stimulus. It is likely to end up around $1 trillion which is still $1 trillion more than is needed. The expanded PPP now in place will be a major help, but reopening New York and California will be far more important.

Odd coincidence, but two days after Trump is out, several Democrat-run cities suddenly, all of them at once,  discovered it is OK to again have indoor dining.

They are now immunizing 1.2 million a day and rising, so that will also make a major difference.

New York and California together are a major piece of national GDP.  New York is 9%.  Los Angeles, California is shut down, but as a result is the epicenter of new cases- when you confine people indoors they spread the virus, and that is exactly what is happening.

In New York, Governor Cuomo is threatening to raise taxes to 14.7%-state and city, and they think anyone who has a high income will remain there?