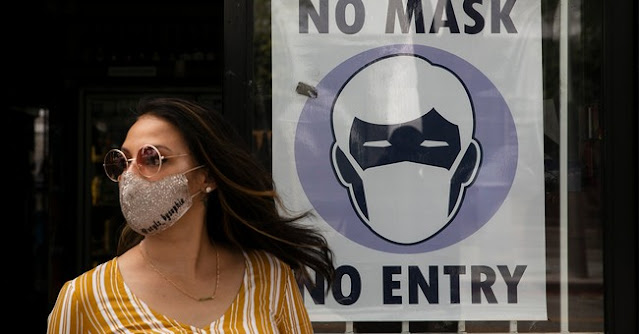 As my listeners and readers can hopefully attest, I have been on a lifelong quest to understand human nature and human behavior. I am sad to report that I have learned more in the last few years, particularly in 2020, than in any equivalent period of time.

These past few years have taught me not to so quickly judge the quiet German, Russian, etc. Of course, I still judge Germans who helped the Nazis and Germans who in any way hurt Jews. But the Germans who did nothing? Not so fast.

What has changed my thinking has been watching what is happening in America (and Canada and Australia and elsewhere, for that matter).

The ease with which tens of millions of Americans have accepted irrational, unconstitutional and unprecedented police state-type restrictions on their freedoms, including even the freedom to make a living, has been, to understate the case, sobering.

The same holds true for the acceptance by most Americans of the rampant censorship on Twitter and all other major social media platforms. Even physicians and other scientists are deprived of freedom of speech if, for example, they offer scientific support for hydroxychloroquine along with zinc to treat COVID-19 in the early stages. Board-certified physician Dr. Vladimir Zelenko, who has saved hundreds of COVID-19 patients from suffering and/or death, has been banned from Twitter for publicizing his lifesaving hydroxychloroquine and zinc protocol.

Half of America, the non-left half, is afraid to speak their minds at virtually every university, movie studio and large corporation -- indeed, at virtually every place of work. Professors who say anything that offends the left fear being ostracized if they have tenure and being fired if they do not. People are socially ostracized, publicly shamed and/or fired for differing with Black Lives Matter, as America-hating and white-hating a group as has ever existed. And few Americans speak up. On the contrary, when BLM protestors demand that diners outside of restaurants raise their fists to show their support of BLM, nearly every diner does.

So, then, who are we to condemn the average German who faced the Gestapo if he didn't salute Hitler or the average Russian who faced the NKVD (the secret police and intelligence agency that preceded the KGB) if he didn't demonstrate sufficient enthusiasm for Stalin? Americans face the left's cancel culture, but not left-wing secret police or reeducation camps. (At least not yet -- I have little doubt the left would send outspoken conservatives to reeducation camps if they could.)

As a student of totalitarianism since my graduate studies at the Russian Institute of Columbia University's School of International Affairs (as it was then known), I have always believed that only in a dictatorship could a society be brainwashed. I was wrong. I now understand that mass brainwashing can take place in a nominally free society. The incessant left-wing drumbeat of The New York Times, The Washington Post, the Los Angeles Times and almost every other major newspaper, plus The Atlantic, The New Yorker, CNN, ABC, CBS, NBC, PBS, NPR, all of Hollywood and almost every school from kindergarten through graduate school, has brainwashed at least half of America every bit as effectively as the German, Soviet and Chinese communist press did (and in the latter case, still does). That thousands of schools will teach the lie that is the New York Times' "1619 Project" is one of countless examples.

Prior to the lockdowns, I flew almost every week of the year, so I was approached by people who recognized me on a regular basis. Increasingly, I noticed that people would look around to see if anyone was within earshot and then tell me in almost a whisper: "I support Trump" or, "I'm a conservative." The last time people looked around and whispered things to me was when I used to visit the Soviet Union.

In Quebec this past weekend, as one can see on a viral video, a family was fined and members arrested because six -- yes, six -- people gathered to celebrate the new year. A neighbor snitched on them, and the celebrants were duly arrested. The Quebec government lauded the snitches and asked for more public "collaboration."

Snitches are likewise lauded and encouraged in some Democrat-run states and cities in America (Los Angeles Mayor Eric Garcetti in March: "Snitches get rewards") and by left-wing governments in Australia. Plenty of Americans, Canadians and Australians are only too happy to snitch on people who refuse to lock down their lives.

All this is taking place without concentration camps, without a Gestapo, without a KGB and without Maoist reeducation camps.

That's why I no longer judge the average German as easily as I used to. Apathy in the face of tyranny turns out not to be a German or Russian characteristic. I just never thought it could happen in America.

Dennis Prager is a nationally syndicated radio talk-show host and columnist. His latest book, published by Regnery in May 2019, is "The Rational Bible," a commentary on the book of Genesis. His film, "No Safe Spaces," was released to home entertainment nationwide on September 15, 2020. He is the founder of Prager University and may be contacted at dennisprager.com.