Project Veritas’ latest video catches ex-PBS attorney Michael Beller as he dreams of using Joe Biden’s presidency as an opportunity to take the kids of Republicans to ‘enlightenment camps.’ PBS has since denounced Beller, but what is it that makes some activists so comfortable with their radical ideas that they’ll openly share them with a virtual stranger? 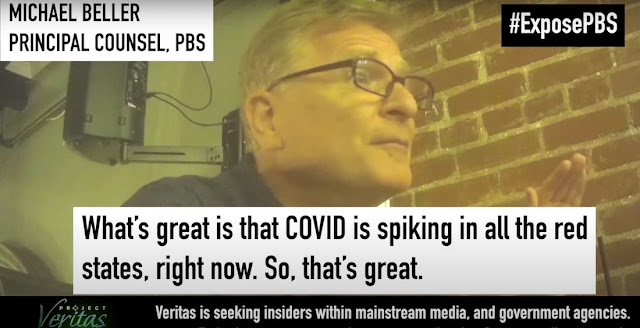 An undercover video released by Project Veritas shows PBS principal counsel Michael Beller saying violence and insurrection are appropriate actions when your candidate loses. Asked what he would do if Trump were to win the election, he replies, “Go to the White House and throw Molotov cocktails.”

Left-wing violence doesn’t shock anyone. This is par for the course. Most disturbing were his statements about Trump supporters’ children. “Even if Biden wins,” he said, “We go for all the Republican voters, Homeland Security will take their children away and we’ll put them into reeducation camps.”

Beller went on to express his concerns that Republicans are all bad parents. “Kids are growing up knowing nothing but Trump for four years. You’ve got to wonder what they’re going to be like. They’ll be raising a generation of intolerant horrible people — horrible kids.”

What Beller doesn’t seem to understand about most Republicans is that we don’t involve our children in politics for the most part and, instead, like to shield them from the unbridled hatred that is thrown our way by people like Beller until they are at least teens. No Republicans I know are saturating their young kids in politics. That’s unhealthy and, dare I say, bad parenting.

PBS is a publicly-funded operation. James O’Keefe’s undercover sting made them move fast. Beller has been fired.

My favorite part of an O’Keefe series is when James confronts the subject after the video has been released. This is the kind of journalism I love. Project Veritas gets results. I’m proud of PBS for firing Beller immediately and not quibbling about it. PBS offers wonderful programming that people on both sides of the aisle enjoy and benefit from. There’s no room for this kind of hatred and bigotry in public programming.