The Tragedy of Biden Voters 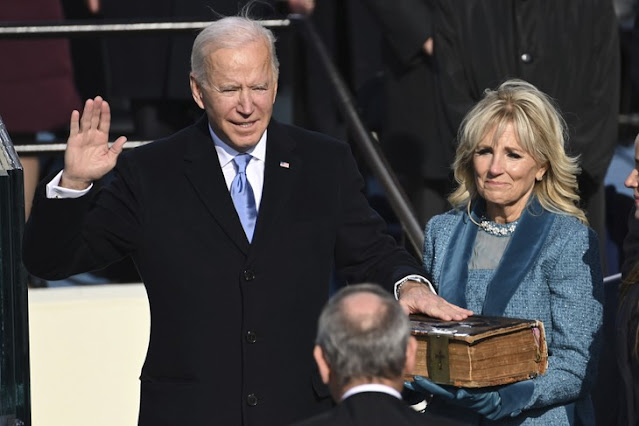 On his first Real Time installment after returning from vacation, his first of the Joe Biden presidency, host Bill Maher delivered an interesting New Rule monologue, The Tragedy of Trump Voters. In it, the comedian and commentator told his viewers to go ahead and hate President Trump, but not his 74 million voters.

That’s probably a good idea; Maher has them from time to time.

In his closing remarks, Maher delved into the life and death of Capitol Building demonstrator Ashli Babbitt, who was shot by Capitol Police as she tried to enter the congressional chamber.

No matter what political perspective is deployed for analysis, Babbitt’s death is tragic. Many Republicans and conservatives, especially those who have supported and still support the former president, will take issue however with Maher’s Trump-bashing spin on this woman’s sad end. But the exercise provides an interesting angle.

How would “tragic” apply to the rank-and-file Biden voter? We’re not talking here about the political, academic, Big Tech, or cultural elites, the real inciters of violence, who won’t be happy until America is transformed to the point of bearing scant resemblance to the intent of its founding documents. We’ll exclude from discussion, too, the seething ingrate extremists, bankrolled by Soros and his ilk, who are still taking to the streets, who will never be happy.

Our focus is on the tragedies awaiting propagandized Democrats whose primary intent was to remove Trump, and may not have fully grasped what may be in store for them if Biden’s cabal of far-leftists have their way.

On immigration policy alone, these people may be in for an outcome that strikes at the very heart of home and hearth. If Biden’s border policy wish list comes true, average suburban Dems may soon find their public schools overrun with a new wave of non-English-speaking children of immigrants, many of whom recently traded their social status up from Third World standards. These arrivals would come in addition to the millions of children of illegal aliens already in the country. The leftist ruling class isn’t worried; their kids go to costly private schools.

Democrats who may have hoped that electing Biden would calm the waters might have to countenance a whole new level of turmoil in the form of rampant immigrant crime. In addition to floating a plan for citizenship for untold millions of illegal entrants, Biden sought to place a moratorium on deportations, even for the most violent criminal aliens. The patently unconstitutional executive order was promptly blocked by a Texas court, but whatever happens, the order indicates that terminal softness will characterize Biden/Harris immigration policy. If Biden’s Democratic Socialist-crafted policymaking becomes law, dump-Trump-at-any-cost suburban moms will have to reckon with the possibility of a Friday night run to 7-Eleven spelling death for family and friends due to increased numbers of drunk-driving immigrants or bad-hombre, gun-toting gangbangers.

Biden’s reported consideration of sending billions of U.S. taxpayer dollars to Central America indicates an understanding among his open-borders advocates that something must be done—or at least seem to be done–to stem the tides currently determined to reach our promised land. This attempt to pay them there so we don’t have to stop them here assumes that the money will actually trickle down to the great unwashed looking to make America home.

All this leads to hospitals and emergency rooms besieged with unvaccinated, undocumented arrivals. It was Biden who criticized Trump’s initial COVID-19 travel bans, then reversed himself, and now may be in the process of reversing himself again by allowing untrammeled access to health care infrastructure for illegal comers. A simple weekend visit to a hospital or urgent care emergency room for an ankle fracture my expose Biden loyalists—and anybody else—to a reception area packed with contagious vectors settled in for a long wait. Legions of untested foreign nationals have their sights set on illegal entry. Don’t be surprised when Alexandria Ocasio-Cortez demands they be vaccinated before U.S. citizens.

The media duped low-info Democrats into believing that Mr. Trump bungled the pandemic response. It is lucky for them — and for the rest of us — that Trump’s task force sprang into action and put vaccines on the fast track. Meanwhile, that suited flak from the World Health Organization, like an evil groundhog come to the surface, is back in the loop, freed to ramp-up his COVID communist apologetics.  It’s all yours, Joe.

The tragic Biden voter is tragic for America. With the Paris Climate Accords yoke back around our necks, expect good Democrats to pony-up without protest for meaningless climate strictures that don’t measurably affect environmental pollution while the COVID communists snicker at our idiocy and foul the air, water, and land with unregulated contaminants. Never mind what standard of living awaits the children and grandchildren: The United States must lead the way.

Thoughts and prayers for those whose livelihoods are scuttled by the cancellation of the Keystone Pipeline. Don’t be surprised when that cousin formerly earning in the high five-figures as a welder shows up at your door looking for odd jobs. Tell him to call Transportation Secretary Pete Buttigieg. When Buttigieg’s office blows him off, the next call should go to our friends in the Middle East—they’ll be waiting.

Democrat taxpayers, and the rest of us, will potentially contribute to re-empower the Iranian mullahs’ quest for an expanded terror network and nuclear capability.  There is no political litmus test for those buried in the rubble of Islamic extremist terror. Hard to have a drum circle after that.

Does your progressively-raised daughter have her heart set on school sports competition? Biden’s transgenderism policy seeks to condemn her to permanent third and fourth place.

Finally, as reported by Newsmax, the New York Times has run a piece suggesting that Joe Biden will “save” Catholicism from the “far right.” As any sixth-grader raised in the Catholic tradition knows, pro-abortionists can’t save Catholicism, can’t save the lives of the unborn, and can’t save themselves.

Unless Republicans effectively fight back and save dunderheaded Democrats from themselves, the manifold tragedy of the Trump-hating Democrat voter will be legendary. No single article — or book! — will be sufficient to provide even a pared-down outline of the potential damage caused by the redistributionist agenda ushered in (either legally or fraudulently) on Election Day 2020. The wealthy bi-coastal “progressive” influencers will be immune.

New Senate Majority Leader Chuck Schumer didn’t mince words prior to the Georgia run-offs: “Now we take Georgia and then we change the world!”

Tens of millions of Democrats followed their leadership with banners high and insipid slogans on their lips. Many of them who currently reside on the “haves” side of the “haves and have nots” equation may be in for a rude awakening.

After a mad quest for power at any cost, inflamed with hatred for a president, the Democratic Socialists have prevailed. Power over what? If the policy agenda already bubbling in the cauldrons of Democrat-controlled national government comes to a full boil, they will have achieved power over a globalist, Marxist disaster.

And we’ve only scratched the surface of the tragedy.

Mark Ellis is Associate Editor at the Northwest Connection, Portland, Oregon’s only conservative web/print publication. He is the author of the political thriller A Death on the Horizon. Follow Mark, who has not yet been banned from  Twitter.