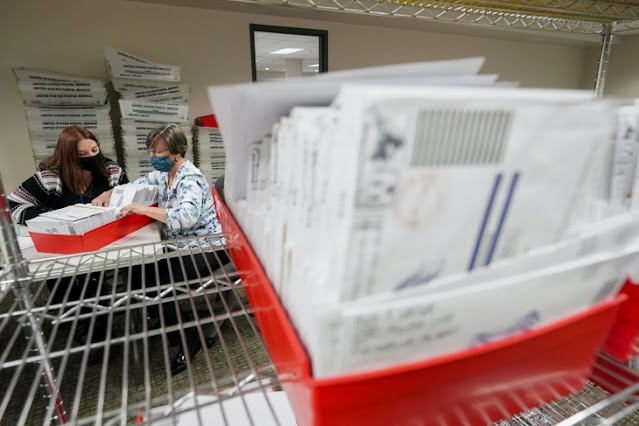 A loose “network” of about 400 former investigators and intelligence operatives from the FBI, CIA, NSA, and several other agencies are investigating the 2020 election to determine if there was any election fraud, according to an exclusive story in The Epoch Times.

A former CIA intelligence officer-turned private agent for a “strategic planning, technologies and foreign and domestic” group under President George H.W. Bush says he’s been a part of a network of such investigators since 2014 but the group is increasing in size because of the shady antics surrounding the 2020 presidential election results.

Robert Caron told The Epoch Times that the election fraud was so in-your-face that he was impelled to activate the group to investigate it.

“After numerous reports of irregularities in the 2020 election, the investigation network expanded. Many have focused on investigating the election, according to Caron, who said most are volunteering, while some are getting paid for the inquiry. He said that as far as he knows, the size of the network is “way over 400” and that each member of the network sees obvious election fraud based on their own observations.

“The fraud was so massive and so blatant, despite what the mainstream media said, that we need to get this information out to the public,” said Caron. “That’s why more and more people from the intelligence community and law enforcement are coming out, which is unheard of.”

It’s unclear what the group can chase down at this point. The deadline to approve the presidential contest is set for January 6.

The group issued a joint statement on Saturday calling for the creation of a commission to investigate the election results.

[A]n Electoral Commission, with full investigatory and fact-finding authority, to conduct an emergency 10-day audit of the election returns in the disputed states. Once completed, individual states would evaluate the Commission’s findings and could convene a special legislative session to certify a change in their vote, if needed.

“Accordingly, we intend to vote on January 6 to reject the electors from disputed states as not ‘regularly given’ and ‘lawfully certified’ (the statutory requisite), unless and until that emergency 10-day audit is completed.

The group further states that such an audit is not unprecedented.

[T]here is long precedent of Democratic Members of Congress raising objections to presidential election results, as they did in 1969, 2001, 2005, and 2017. And, in both 1969 and 2005, a Democratic Senator joined with a Democratic House Member in forcing votes in both houses on whether to accept the presidential electors being challenged.

“The most direct precedent on this question arose in 1877, following serious allegations of fraud and illegal conduct in the Hayes-Tilden presidential race. Specifically, the elections in three states-Florida, Louisiana, and South Carolina-were alleged to have been conducted illegally.

“In 1877, Congress did not ignore those allegations, nor did the media simply dismiss those raising them as radicals trying to undermine democracy. Instead, Congress appointed an Electoral Commission-consisting of five Senators, five House Members, and five Supreme Court Justices-to consider and resolve the disputed returns.

Vice President Mike Pence, who presides over the joint session, seemed willing to entertain the group’s request. He issued a statement saying that he “welcomed the efforts of members of the House and Senate to use the authority they have under the law to raise objections and bring forward evidence before the Congress and the American people on January 6th.”

Caron says the group of 400-plus intelligence officials began investigating the results of elections when the intelligence community was shocked when President Obama did not act “properly on intelligence” after the 2016 election, according to then-Defense Intelligence Agency chief General Michael Flynn, who was later fired after criticizing his boss. Flynn was later spied on by Obama administration officials in order to get the three-star general thrown out from his job as President Donald Trump’s National Security Adviser. It worked. The Crossfire Hurricane investigation, otherwise known as the Russia hoax, ended in infamy.

Since then, the group has also seen other instances where intelligence wasn’t properly acted upon.

“President Obama was not acting properly on intelligence that he received concerning Benghazi,” Caron said, referring to an attack of U.S. government facilities in Benghazi, Libya, that resulted in the deaths of several U.S. officials. He said he believes it was then that a lot of people from the intelligence community got together and started recruiting people to join the network.

The mainstream media continues to pretend that there’s nothing hinky with the election results or myriad reports of voter fraud. It will be interesting to see if they pick up this story about the 400-plus intel pros looking into the election. If you’ll recall, a pre-election letter signed by 50 Obama-era intelligence community folks was issued in response to the Hunter Biden laptop, Ukraine, and The Big Guy story. The same people who said that Donald Trump was a Russian secret agent alleged that the laptop story could possibly, perhaps, maybe be Russian disinformation. The media hung their hats on that gauzy characterization to boycott the explosive story about Joe Biden’s son and Biden’s high-stakes role as the family rainmaker. And only after the election did we find out that the younger Biden was indeed under investigation.

If these intelligence community spooks have any intel they’d better get the news out fast. Time’s a-wasting.

Victoria Taft is the host of “The Adult in the Room Podcast With Victoria Taft” where you can hear her series on “Antifa Versus Mike Strickland.” Find it  here.  Follow her on Facebook,  Twitter, Parler, MeWe, Minds @VictoriaTaft