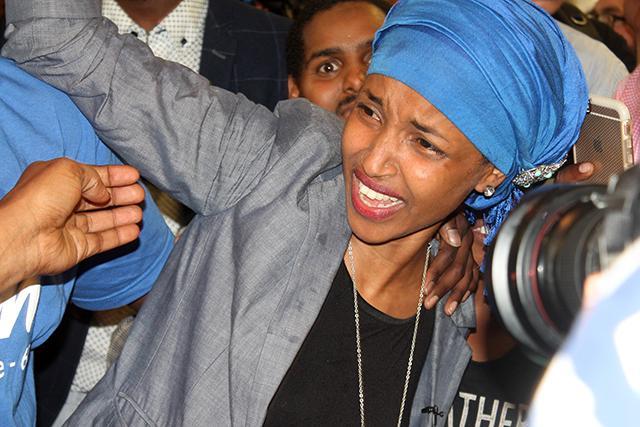 DO DEMS HATE HATE? NO

As Scott has noted, the Democratic Party is tied up in knots over Ilhan Omar’s overt anti-Semitism and reactions to it, both inside and outside the party. This is not due to bungling on the part of the Democrats’ House leadership, as some have suggested. Rather, the problem is inherent. It goes to the essence of the modern Democratic Party.

It is fundamental to the Democrats’ worldview and reason for being that all hate comes from the right. They constantly tout themselves as the party of inclusion, tolerance and love. They never tire of talking about, for example, Charlottesville, even though the violence there was caused at least as much by the far-left Antifa as by a handful of ragtag white supremacists. But of course, they never mention James Hodgkinson.

More importantly, our politics today are suffused with hate, to a degree not seen within my lifetime. Above all, hate for President Trump. Also, hate for conservatives. Hate for Republicans. Hate for all those who fail to toe the latest, ever-shifting intersectional line. Everyone who pays attention to Twitter, to Facebook, to cable news, or to current events generally knows this is true. And yet the Democrats cannot admit that they, and the Left, are the overwhelming source of hatred in today’s world.

But Ilhan Omar posed a problem. Her hate was different because it was directed toward a group that mostly supports Democrats. Think about it: what she said about Jews was far milder than what Democrats say about President Trump and his supporters every day. They constantly call Trump a traitor. It was also milder than what many liberals say about white people on MSNBC, without drawing a peep from the Democrats’ leadership. If Omar had trained her fire on the right, or groups associated with the right, like whites or rural Americans, no Democrat would have minded.

Ilhan Omar hates like a Democrat, and she openly expresses that hate like a Democrat. The problem is that she hates people who mostly support the Democratic Party. Not only that, by openly expressing her bigotry she has exposed an important rift among the Democrats. Like the Labour Party in Great Britain, the Democratic Party has become a haven for anti-Semites. (Actually, it has been that for a long time: see, for example, Crown Heights and “Hymietown.”) Today, the fact that many Democrats don’t like Jews is becoming harder to conceal. Omar has made it harder still.

I thought the House Democrats’ original resolution condemning anti-Semitism, without naming Ilhan Omar, was anodyne. I thought she probably could vote for it. But that resolution, which referred only to anti-Semitism, was withdrawn by leadership, reportedly because of an outpouring of support for Omar within the party. That support didn’t come from people who doubted that she is an anti-Semite–she has made that blindingly clear, repeatedly!–but rather from people who share her particular bigotry.

So the Democrats are in a tight spot. Leadership has had to back off, and is in the process of substituting a resolution that toes the party line by nattering on about Islamophobia and so on. A resolution that refers to everything, and therefore nothing. A resolution that tries to preserve the fig leaf of a party that is opposed to hate. Even as its members express the vilest, most hateful, most bigoted views that America has seen in its modern history.

WILL PELOSI REMOVE OMAR FROM HOUSE FOREIGN AFFAIRS, OR WILL SHE REMAIN SILENT? 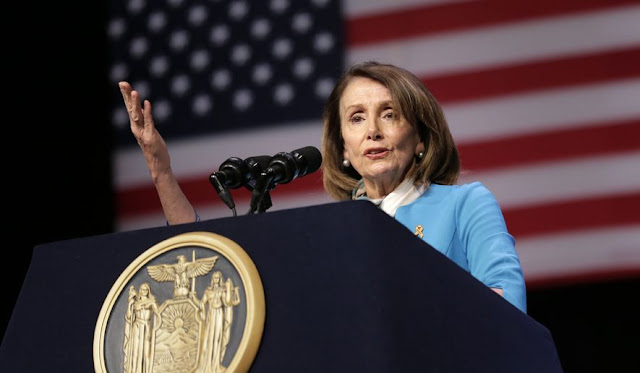 Pelosi — who has now received a letter signed by nearly a dozen Jewish organizations calling for Omar to be removed from her assignment on the House Foreign Affairs Committee — finds herself at a crossroads. She can uphold the values that decent people around the world hold by rejecting anti-Semitism, or she can disregard Omar’s abusive speech, which is directed at one of the smallest and most persecuted minority populations — American Jewry.

As a Muslim board member of the USC Shoah Foundation, I am committed to combating anti-Semitism. As a practicing Muslim, I know Islam reveres both Moses and the Torah. It mandates pluralistic belief — including belief in Judaism — as a non-negotiable requisite for true belief in Islam. Defeating radical Islamism — by which I mean a political, totalitarian ideology — requires us to confront, not evade, anti-Semitism.

The shame Omar brought upon America’s Muslims is clear. It’s now time for America’s Democrats to examine their shameful Faustian bargain with identity politics, which has led to their embrace of Islamism.

In America, “Islamism” has been accorded the rights — and through those rights,  the legitimacy — that a minority religion typically (and rightly) enjoys, rather than the ruthless scrutiny to which most political ideas are subjected.

As a result, any scrutiny of America’s Muslims — whether ghettoized first-generation Muslims at risk of radicalization, or America’s most powerful Muslim women in Congress — is immediately dismissed, rejected on the basis of “Islamophobia.” This repels any legitimate examination of  political thought.

Worse, the critic is smeared as a xenophobic McCarthyite, even when she is Muslim herself.

Omar, in keeping with the progressive left’s enamorment with victimhood, has capitalized on this to good effect, though she has not been called to task for her anti-Semitism either by the public or by Congress.

CNN anchor Chris Cuomo asserts that any criticism of Omar is an act of Islamophobia. He is far from alone in his outrage. He’s joined by prominent American intellectuals, including Naomi Klein, Glenn Greenwald and Peter Beinart. The falsehood of the besieged Muslim in America fits with the hunger for victimhood ideology.

Unless Pelosi responds to legitimate concerns about Omar’s coziness with anti-Semitism — which is repugnant — Omar will lead the Democratic Party down a path that requires Democrats to espouse anti-Semitism, demonize Israel, Israelis and Jews, including American Jews.

Unfortunately, there is a great deal of political capital to be gained by both Islamists and Democrats in pedaling our false victimhood as Muslims in America.

This may explain the silence both from Pelosi and 2020 Democratic (Jewish) hopeful Sen. Bernie Sanders, who has expressed solidarity with Omar.

This silence and support has continued even at the cost of Jewish support among both voters and donors, and in the face of rising anti-Semitism.
Instead of examining ideas, we are instead silenced at the indignant altar of identity.

Omar’s ideas — not her identity — demand the Democratic party answer for its apparent embrace of anti-Semitism.

The rise of anti-Semitism (for which Islamism has been an extremely potent vehicle) is partly explained by the legitimacy accorded Islamism in the United States.

Unable to distinguish “Islamism” from Islam, American politicians (including Democrats) and others too often grant  Islamism the status of a minority religion instead of exposing its true character as a supremacist political totalitarianism masquerading as a religion.

So far, the masquerade has paid off. Women’s March leader Linda Sarsour (who is stained with anti-Semitic associations), Omar and her fellow Islamist intimate, Michigan Rep. Rashida Tlaib, have each ascended to the fore  on the crest of progressive left-wing identity politics by embracing the tale of Muslim victimhood.

Pelosi has a choice. She can call for Democrats to divorce Islamism — which includes removing Omar both from the House Foreign Affairs Committee and from Congress — or she can continue this unholy alliance for the sake of a Faustian bargain of which even the devil would be proud.

Qanta A. Ahmed (@MissDiagnosis) is a member of the Council on Foreign Relations and a member of the Committee on Combating Contemporary Anti-Semitism Through Testimony at the University of Southern California Shoah Foundation.

By Valerie Richardson | The Washington Times 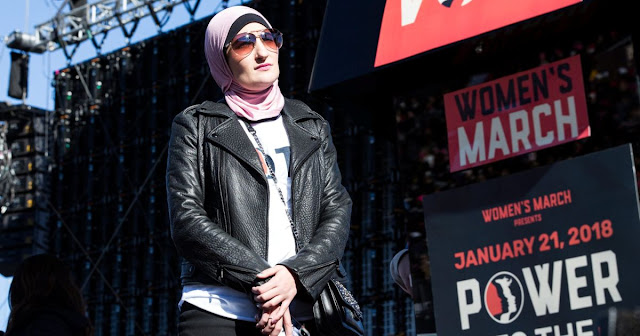 “Nancy is a typical white feminist upholding the patriarchy doing the dirty work of powerful white men,” said Ms. Sarsour Tuesday on Facebook.”God forbid the men are upset — no worries, Nancy to the rescue to stroke their egos.”

The House Democratic leadership responded to the latest uproar over Ms. Omar with a proposed resolution condemning anti-Semitism, although the initial draft does not mention the first-term congresswoman by name.

“You want a resolution? Condemn all forms of bigotry,” said Ms. Sarsour. “All forms of bigotry are unacceptable. We won’t let them pin us up against each other. We stand with Representative Ilhan Omar. Our top priority is the safety of our sister and her family.”

A vote on the resolution, which has reportedly been expanded to condemn all bigotry, is expected Thursday.

Ms. Sarsour and two of her co-chairs, Tamika D. Mallory and Carmen Perez, have been accused themselves of anti-Semitism for their ties to Nation of Islam leader Louis Farrakhan, described by the Anti-Defamation League as “America’s leading anti-Semite.”

Ms. Sarsour has also come under fire for her support of convicted Palestinian terrorist Rasmea Odeh, who was deported in 2017 for lying on her visa application about her criminal history. She served a 10-year prison sentence for her role in the 1969 bombing at a Jerusalem supermarket that left two Jewish students dead.

The Women’s March has repeatedly denied allegations of anti-Semitism, and named three progressive Jewish women to its board in January.

https://www.washingtontimes.com/news/2019/mar/6/linda-sarsour-typical-white-feminist-nancy-pelosi/
Posted by Frances Rice at 8:34 AM