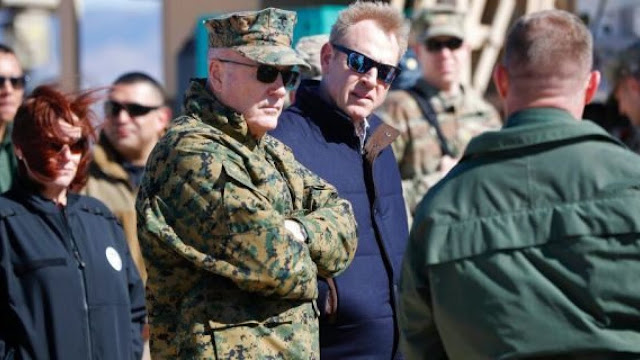 The Pentagon notified Congress late Monday that it authorized the transfer of up to $1 billion to erect 57 miles of "pedestrian fencing" along the U.S.-Mexico border in direct support of President Trump's national emergency declaration from last month.

The fencing, which will be 18 feet high, is to be erected in the Yuma and El Paso sectors, the statement read. The Pentagon's announcement was notable. A reporter from the New York Times tweeted that it is the first time the funds will be transferred under section 284 for the border wall.

Section 284 allows the Pentagon to "construct roads and fences and to install lighting to block drug-smuggling corridors across international boundaries of the United States in support of counter-narcotic activities of Federal law enforcement agencies," the statement read.

The Pentagon's announcement was made as Trump nears a victory over Democrats as the House tries to override his first veto, a vote that seems certain to fail and allow his declaration to stand. The vote, which is set for Tuesday, would keep the border emergency intact, which for now, would allow the president to shift an additional $3.6 billion from military construction projects to work on a barrier along the southwest boundary.

"The president will be fine in the House," said Minority Leader Kevin McCarthy, R-Calif., in a brief interview. "The veto will not be overridden."
…

Patrick M. Shanahan, the acting Secretary of Defense, announced that the funds will be used to support the Department of Homeland Security and Customs and Border Patrol. He authorized the Army Corps of Engineers to begin its planning and execution.

The Associated Press contributed to this report 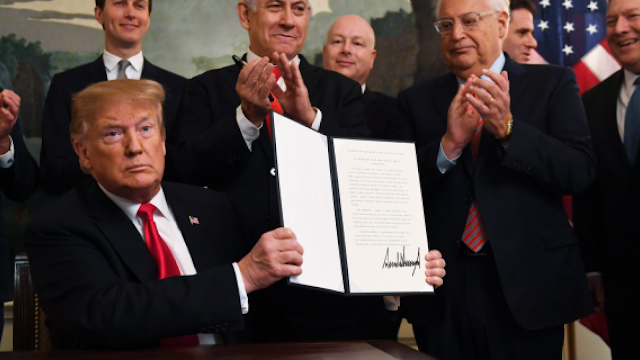 With Israeli Prime Minister Benjamin Netanyahu standing by his side, President Trump on Monday signed a proclamation officially recognizing the contested Golan Heights region as part of Israel – marking another unprecedented move by Trump in strengthening U.S.-Israeli relations.

“This was a long time in the making and it should have taken place many years ago,” Trump said before signing the proclamation.

Trump’s proclamation came just days after he tweeted his support for recognizing Israeli sovereignty over the Golan Heights.

Netanyahu, who has previously accused Iran of attempting to set up a terrorist network to target Israel from the Golan Heights, praised Trump for his proclamation – calling the move “historic” and “invaluable” to the defense of the Jewish state.

“It was so important for me to come here and thank you,” Netanyahu said to Trump. “Israel has never had a better friend than you.”

The Israeli leader added: “Israel has seized the high ground which has proved invaluable to our defense.”

The Golan Heights is a large plateau that sits in a disputed area along the border with Syria. It has been occupied by Israel since it was seized from Syria in 1967. Israel contends the region is a critical buffer zone between the nation and the conflicts throughout the Middle East as Syria’s eight-year civil war has at times come close to the Golan boundary.

While the U.S. has historically attempted to remain impartial in the conflict over the Golan Heights -- which Israel captured from Syria in 1967 during the Six-Day War -- the Trump administration already has strengthened ties to Israel on other fronts.

In 2017, Trump broke with decades of U.S. policy on Jerusalem and recognized the city as Israel’s capital, while a recent State Department report human rights bucked tradition and used the phrase “Israeli-controlled,” rather than “Israeli-occupied,” to describe the Golan Heights, the West Bank and Gaza.

While appearing aside Trump during the press conference on the proclamation, Netanyahu is cutting his trip to Washington short following an early-morning rocket attack from the Gaza Strip that slammed into a house in central Israel and wounded seven people.

Netanyahu held emergency consultations with military officials back in Israel and canceled a planned address to the AIPAC pro-Israel lobby group and meetings with congressional leaders. The Israeli military announced earlier on Monday that it has started striking the Islamic militant group Hamas in Gaza after the rocket attack.

The strike came at a sensitive time for both sides. Netanyahu, locked in a tight race for re-election, came under heavy criticism from his rivals Monday and faced tough pressure to strike back at Hamas.

Hamas, meanwhile, is facing perhaps its toughest test since seizing control of Gaza 12 years ago. An Israel-Egyptian blockade, imposed to weaken Hamas, combined with sanctions by the rival Palestinian Authority and mismanagement by the Hamas government have all fueled an economic crisis.

Hamas has been leading weekly protests along the Israeli border for the past year in hopes of easing the blockade, but the demonstrations, in which some 190 people have been killed by Israeli fire, have done little to improve conditions.

BAGHOUZ, Syria -- The caliphate has crumbled, and the final offensive is over. While the official announcement hasn’t yet been made – Fox News has been told that this village, the last ISIS stronghold, is liberated.

It’s the first time since we’ve been here in Syria for five days that the bombs have stopped dropping and the gunfire has disappeared. We have witnessed the end of the caliphate – the brutal empire that once ruled over 8 million people – is gone.

Troops here are now bringing down the black flags of ISIS. The flags no longer fly over the town, instilling fear. 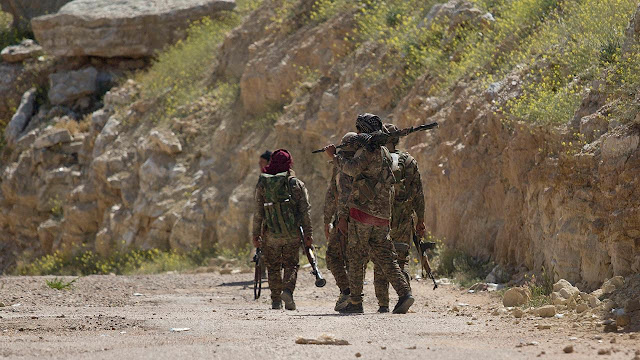 The last five days, Fox News has witnessed the last major offensive up close -– with U.S.-backed SDF forces attacking ISIS from three sides, pushing the fighters back, house to house, then tent to tent, against the Euphrates River.

Inside Baghouz, it’s easy to see how they hid for so long – not just in tunnels but trenches and hundreds of cubby holes covered by tarpaulins, which blend in perfectly to the dirt.

In the end, the majority surrendered. In fact, since the start of the year about 60,000 have dripped into the desert, and most are now held in camps.

There is a major concern about what to do with the camps though. The SDF has asked for U.S. support in setting up a tribunal here to prosecute them.

his final corner of the caliphate was in the far eastern desert of Syria– it was where ISIS first captured territory, and it is where they finally lost.

A clearing operation is now underway in the town– and an announcement is expected soon.

None of the main surviving ISIS leaders have been caught inside Baghouz. Instead, they left their men to fight alone. It’s thought they prepared ahead for the insurgency.

The scale of the devastation here is incredible. And everyone acknowledges that without U.S. support, it would have taken far longer.

For four-and-a-half years, ISIS held this territory, ruling over it with an iron fist. It was the terrorist group’s heartland – and they were so dug in that the only way to push them back was to flatten whole villages. The devastation here goes on for miles – and craters like this are a reminder of the critical role played by U.S. airpower. Military jets still fly overhead.

SDF fighters are all so grateful to the U.S., not just for their help in the battle, but now for its decision to leave troops here when it’s done. Reports now suggest the figure may be around 1,000 staying.

https://www.foxnews.com/world/isis-has-officially-crumbled-and-last-stronghold-liberated-fox-news-has-learned
Posted by Frances Rice at 9:53 AM